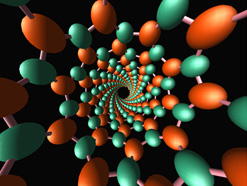 A view down the middle of a boron
nitride nanotube.
(Image: ©Vin Crespi, Penn State Physics.
Distributed under the
Creative Commons license) 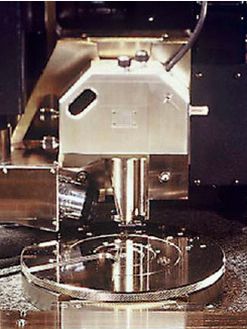 The scanning probe microscope is one.
of the instruments used in nanotechnology.
This one is a Dimension 3100 model. .
(Image: Veeco Digital Instruments)

South Africa’s first two nanotechnology centres are up and running at the Council for Scientific and Industrial Research (CSIR) in Pretoria and the national mineral research organisation Mintek in Johannesburg – both are parastatal organisations.

These centres provide a dedicated environment to explore innovation in the field of nanotechnology, which falls under the branch of science that deals with the properties and behaviours of materials at the nano level. A nanometre (nm) is one millionth of a millimetre – an average piece of paper is about 100 000 nanometres thick.

The national Department of Science and Technology (DST) is one of the major stakeholders in this initiative through its National Nanotechnology Strategy, which was launched in 2006 at Mintek. The DST believes that nanotechnology has the potential to make energy use more efficient, help protect the environment by reducing waste and harmful emissions, and solve major health problems, among other advantages.

“South Africa as a developing nation has a lot to benefit from the development of nanotechnology,” said Minister of Science and Technology Mosibudi Mangena at the opening of the two centres. “We must, therefore, create an environment that is conducive to harnessing the potential benefits of this promising field of science.”

Some of the areas of research that are currently being addressed at the centres include low-cost filters for clean drinking water; the development of accurate and sensitive medical devices for early disease detection; effective diagnosis and treatment of diseases through new drugs; and clean, secure and affordable energy.

Innovation in a fast-growing field

The National Centre for Nano-structured Materials is located at the CSIR. Research here focuses on the design, modelling and synthesis of nanomaterials for use in various applications such as solar cells, printed electronic devices, medical sensors and optical devices. These materials include carbon nanotubes and silicon nanoparticles. The CSIR research group collaborates with units and centres elsewhere in the CSIR, universities, science councils, the private and public sector and international research institutions.

The DST/Mintek Nanotechnology Innovation Centre has three initial focus areas: sensor (for early disease and toxin detection); biolabel (the addition of a marker or label, which can subsequently be detected, to a biological sample); and water nanotechnology. The latter will use nanostructured materials with highly active surfaces to trap or destroy pollutants, or to detect minute quantities of pollutants in water.

As early as 2006 Mintek installed a scanning probe microscope for nanoscience and nanotechnology research in South Africa. The instrument cost R4.5-million and was funded by the DST.

The three focus areas fall under the supervision of three different academic institutions that form part of the Mintek consortium: Rhodes University, which will perform tests on a device for the early detection of disease and toxins; the University of the Western Cape, which will focus on the destruction of pathogens and diseased cells; and the University of Johannesburg, which will look for solutions to remove water-borne pathogens.

The other members of the Mintek consortium are the Medical Research Council, the Water Research Commission, and the DST.

Both centres also place great importance on the training and development of young scientists who will escalate South Africa’s participation in the field of nanoscience.

Already overseas parties are showing interest in South Africa’s nanotechnology programme. In March 2008 the CSIR’s nanotechnology centre hosted a delegation led by member of the British House of Parliament, Claire Curtis-Thomas. The visit took place at the request of the British High Commission in South Africa. Science and innovation attaché Thabisa Mbungwana was among the visitors.

South Africa a potential global leader in the field

South Africa has the potential to become a global pioneer in this field, says the DST, because it has already recorded a number of significant achievements to date. These include inexpensive solar cells for renewable energy; the development of nanomembrane technology for water purification, which will reduce exposure to water-borne diseases such as cholera and typhoid; as well as fuel cell development as an alternative to the problem of fossil fuel consumption.

In order to stay abreast of developments in nanotechnology and remain competitive, the DST’s strategy aims to develop an environment that encourages effective research and provides for the transformation of good ideas into products that offer value both socially and economically. At the same time South Africa’s intellectual property in this field must be protected.

The DST has set aside R450-million for this initiative, to be allocated over a three-year period.

Development is also taking place on an international level. India and Brazil are collaborating with South Africa in nanotechnology research, under the trilateral IBSA agreement. The IBSA nanotechnology initiative has been established to formulate collaborative programmes of mutual interest in the areas of energy, health, water treatment, agriculture and environment.

In general the nanoscale includes anything measuring between 1 and 100 nm – this scale lies between the microscale above it, and the atomic scale below it. At this level materials can’t be seen with even a light microscope – special equipment must be used to observe them.

Nanotechnology involves the manipulation in useful ways of materials on the nanoscale, since materials can have different properties at this level than they do on a normal scale. They may be stronger, conduct electricity more efficiently, have different magnetic properties, or reflect light better. As such nanotechnology potentially holds the key to new materials with undiscovered properties.

It is the task of Mintek and the CSIR to establish these properties in the materials they study and develop applications for them that will improve the lives of South Africans.

Nanotechnology is a fairly new branch of science. In 1986, MIT engineer K Eric Drexler, regarded by many as the father of nanotechnology, published his first book, Engines of Creation, which introduced the term nanotechnology to the world at large. Even before then, however, the eminent physicist Richard Feynman said in 1959 that “we can arrange atoms the way we want: the very atoms, all the way down!”

There are numerous real-life applications for nanotechnology, many of which are in use. Modern computer hard drives use giant magnetoresistive (GMR) read heads that, through nano-thin layers of magnetic materials, allow for enhanced performance and greater storage capacity. Other electronic applications include automotive sensors and landmine detectors.

Already the nanostructure of the leaf of the aquatic lotus flower has been replicated, resulting in the creation of water-repellent surfaces for stain-proof clothing. Scientists are now trying to replicate the silk of the spider, which is immensely strong and flexible and naturally reinforced by nano-crystals.

The future holds the promise of improved solar cells, car tyres with longer wear and better skid resistance, and implantable drug delivery devices. In medicine, drugs that don’t dissolve in water could be administered through nanoparticles that travel in the blood. Gold on the macro level is inert to light, but on the nano level it absorbs light and can turn that light into heat – enough to kill unwanted cells in the body, such as cancer cells.