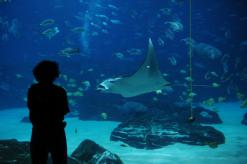 Nandi swims gracefully around the Ocean
Voyager exhibit. Her story is an inspiring
one of care, dedication and international
co-operation. 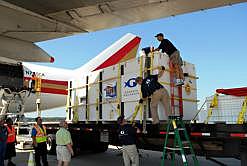 The crate in which Nandi flew across the
Atlantic is carefully offloaded. 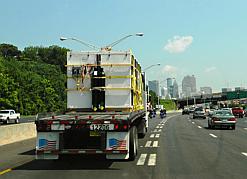 Escorted by a bevy of police motorcycles,
Nandi in her crate is transported to
her new home. 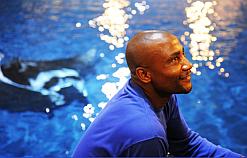 A relieved Jerry Ntombela, with Nandi in
the background, after her release into the
holding tank at the Georgia Aquarium. 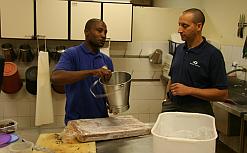 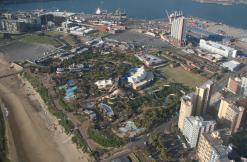 South African marine conservation is once more under the international spotlight with Nandi, the jet-setting manta ray, who is settling into her new home at the Georgia Aquarium in Atlanta, US.

Nandi was injured in a shark net while still a youngster and was nursed back to health at uShaka Marine World in Durban, KwaZulu-Natal. Now her new caretakers hope that she will continue to be an ambassador for the vulnerable manta ray (Manta birostris) species.

Gliding through the water in the 23.8-million litre (6.3-million gallon) Ocean Voyager, the world’s largest saltwater tank, Nandi is creating something of a sensation and is already a crowd favourite, according to reports. Still juvenile by manta ray standards, she weighs just over 200kg and measures 2.7m (9ft) from wingtip to wingtip but has plenty of growing to do – adult mantas are the largest rays in the ocean and can weigh up to two tons, with a wingspan of 5 to 8m (16-26ft).

Nandi was named after the mother of Shaka, the warrior king of the Zulus. And she has lived up to her name, displaying a regal bearing as she navigates gracefully between the thousands of other residents of the Ocean Voyager, trailed by an entourage of fish including golden trevally and crevalle jack.

Nandi was caught in the shark nets along the KwaZulu-Natal coast in 2007 and badly injured herself while struggling to escape. Covered in cuts from thrashing about in the net, she was rescued by a Natal Sharks Board patrol, the organisation that monitors the nets, and taken to uShaka. Here aquarist Jerry Ntombela, who is responsible for the maintenance of the 2.2-million litre (580 000 gallon) open ocean exhibit, took her into his care.

Ushaka Marine World not only features an entertainment park and the fifth biggest tank in the world, but is also an important research facility, housing the South African Association for Marine Biological Research as well as its subsidiary, the Oceanographic Research Institute. Over the past four decades the two organisations have won international recognition as leading marine biological research institutes.

Manta rays are plankton feeders and Ntombela recalls that the traumatised young animal ate nothing for almost two weeks. He persevered with the guidance of colleagues at the Georgia Aquarium, which has experience with plankton-eating whale sharks, until she finally began to eat from a manta-sized ladle – a bucket with a long handle.

During Nandi’s 14-month stay at uShaka she doubled in weight and began to outgrow her tank. She also inspired and educated over half a million visitors in marine conservation matters – but eventually the team realised that she needed a new home.

They decided not to release Nandi back into the ocean for a number of reasons. According to UShaka executive director Dr. Mark Penning, shark and fishing nets were still a danger to the young animal, and it was not certain how she would react to the open sea after becoming used to the protected aquarium environment. Keeping her would also provide a golden opportunity for more research into mantas, and would also allow her to continue her educational role.

The Georgia Aquarium, which has made great strides in raising worldwide awareness about whale sharks, offered to place Nandi in its vast Ocean Voyager tank. The two organisations embarked on an international partnership which would not only see Nandi settling into a new home but would also raise the profile of manta rays amongst the general public.

Working together, they took Nandi on a 26-hour journey of 14 400km (9 000 miles) to the Ocean Voyager. The mega-tank was built to house whale sharks (Rhincodon typus), the largest fish on earth, and currently features four of the huge creatures as well as three beluga whales and thousands of other animals.

Nandi’s journey required a lot of planning, specialised equipment and expertise, but passed uneventfully. She was not fed for several days beforehand to minimise ammonia deposits in the water, and travelled in a chartered 747 cargo jet, accompanied by a team of experts from Georgia Aquarium and uShaka, including Penning and Ntombela. A highly advanced marine life support system monitored her for signs of stress. The water was also monitored to ensure the correct balance of chemicals.

Alert and stable, Nandi touched down in Atlanta on schedule and was whisked to a holding tank beside the Ocean Voyager, where she gratefully had a bite to eat and then began to explore her new surroundings, much to the team’s relief. After giving her more time to get used to the environment the team nudged her out of the smaller pool and into the open waters of the Ocean Voyager.

Nandi will be cared for primarily by Georgia Aquarium husbandry manager Chris Coco.

Fishing is the single major threat to manta rays, which are native to South Africa and many other countries in the temperate and tropical regions of the world. Heavy manta fishing in certain areas, such as Sri Lanka, India and Mexico, has decimated local populations, while general over-exploitation of the seas is a major challenge for marine conservationists.

Mantas are also hunted in the Philippines and Indonesia, and in Southeast Asia and East Africa they are increasingly sought after for traditional medicine and cancer treatment. The animals can live for over 20 years but are not known for reproducing abundantly, as they give live birth to a single pup, or two pups on occasion.

The manta ray is listed as Near Threatened on the Red List issued by the International Union for Conservation of Nature. Near threatened species do not yet qualify for Critically Endangered, Endangered or Vulnerable status, but it is likely that they will qualify for a threatened category in the near future.

The Georgia Aquarium and uShaka expect that with her high profile Nandi will help to create greater awareness not only about manta rays but also about their vulnerable conservation status in the wild, and thereby do her bit to reduce the demand for the creatures or to increase the pressure on fisheries to stop hunting them.

The Georgia Aquarium’s Project Domino programme for whale sharks is aimed at building a better of understanding of the creatures in their natural habitat, while care and study of the whale sharks in the Ocean Voyager tank helps researchers in the field by providing essential information on growth rates, blood analysis, and more.

In South Africa initiatives such as the Mozambique-based Whale Shark Conservation Project, located on the Inhambane peninsula in the southern part of the country, monitors whale shark, manta ray and loggerhead turtle populations and behaviour, and also keeps an eye on the condition of the local coral reefs. From its research the organisation is able to make recommendations for improved marine conservation in the region.