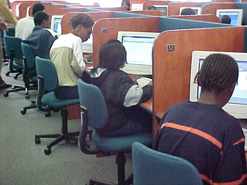 The Mozilla Corporation has awarded a development grant to South Africa’s translate.org.za, a non-profit organisation that specialises in software translation. The grant will allow the company to further expand its translation tools, which are already widely used by other developers in the open source community.

Pootle is used by projects such as the US-based One Laptop Per Child, Creative Commons in California, a non-profit organisation to expand the range of creative works such as audio and images available for others to use and share legally, and open source development project OpenSolaris, which is a worldwide developer community built around the Unix-based Solaris operating system from Sun Microsystems.

Translate.org.za has also notched up a number of other notable achievements. The company broke new ground by translating the entire OpenOffice.org suite into all official South African languages. Other successes include the release of the first free Afrikaans spell checker, and the translation of parts of Red Hat Linux into Afrikaans, Sesotho sa Leboa (Northern Sotho) and isiZulu, thus creating the first operating system in a South African language.

Making the announcement in July 2008, Mozilla’s grants and donations programme leader Seth Bindernagel said, “We did this because Mozilla and Translate’s missions are very well aligned, as both organisations are motivated by promoting openness and opportunity on the internet. Because so many Mozilla and free open source software localisers use Translate’s software, we hope that our support will help amplify the impact they are having in so many translation communities.”

Bindernagel added that the grant is worth US$70 000 (R540 000) and also covers an offline translation tool that is due for release in the future.

“Translate’s software is currently used by 17 different Mozilla localisation teams who work so hard to translate Mozilla software perfectly so that it can ship in their native languages. Also, it is our hope that Mozilla will be able to use Translate’s Toolkit platform as one of a few starting points to improve our localisation process,” he said.

A shining star in the open source community

“The grant from Mozilla not only helps us to carry on with our work on Pootle and the Translate Toolkit,” said programmer Friedel Wolff, “but is also a fantastic recognition of the work that translate.org.za has done as it is based on the strength of our past work and the tools that we have released to users.”

Among the many members of the Mozilla community who create tools that aid in localisation, Bindernagel particularly singled out translate.org.za as one that has made great progress. Translate.org.za will now be able to further expand the capabilities of its products by making them more accessible and easier to use as well as simplifying management of translations and making it easier to monitor their quality.

“We want to limit the amount of technical knowledge users need to use the tools so that they can be used by more people,” said Wolff.

The Mozilla Corporation is a wholly-owned subsidiary of the Mozilla Foundation. The company’s function is to coordinate and integrate the development of its popular internet software projects such as Firefox and Thunderbird, which it does by supporting the worldwide community of Mozilla contributors and by assisting others who are building technologies that benefit users around the world – such as translate.org.za.