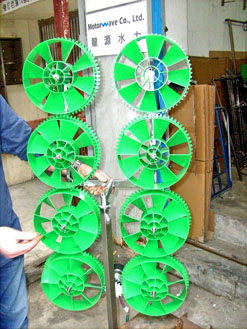 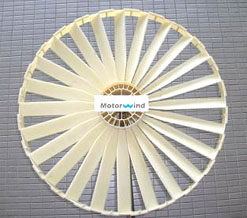 The plastic material used to make the
motorwind turbine can easily be recycled.
(images:motorwavegroup.com)

Unlike the traditional wind turbine, the motorwind turbine works from wind speeds of 1m a second, or 3.6km per hour and it doesn’t have to be shut down for very high wind speeds. The mechanisms can be installed on any support structure including buildings, poles, trees, rocks, mountains, bridges and at low heights.

Most crucial to the environment, the motorwind turbines are made of recycled plastic, which, in turn, can be recycled several times

What is the motorwind turbine?

French-born Lucien Gambarota, owner of the Motorwave company, developed the concept. Gambarota is now a resident in Hong Kong where he continues to work on the Motorwave and other renewable energy projects.

Frustrated with his monthly electricity bills, Gambarota retreated to his workshop and eventually came up with the idea for a new type of wind turbine that uses very small plastic blades.

The product was officially launched in March 2007. The manufacturing company, Motorwave, received additional research assistance from Hong Kong University. The company has since pledged to donate a portion of the profits from Motorwave’s sales to the university for further research in renewable energy technologies.

Motorwind is the only renewable energy system in the world, which not only allows the production of power, but a clever marketing strategy, too. The micro-turbines come in a variety of colours making it easy for an individual, school or company to use the turbines creatively.

The motorwind is not Gambarota’s first successful invention. A chemist by profession, Gambarota became familiar with plastic moulding during his 15-year career as a manufacturers’ representative for various Chinese toy factories.

He has also developed a popular and lucrative toy lollipop in Hong Kong that lights up as the child eats it. He gained recognition in a Wall Street Journal article for his work on rewiring exercise machines in a Hong Kong gym to harness energy created by workouts.

Each unit of electricity generated from motorwind displaces one unit generated from fossil fuels, with the added benefit that the electricity is consumed on-site. This amounts to a displacement of approximately 1.4 tonnes of CO2 per year – a significant environmental contribution.

The motorwind does not have to be shut down during high winds. It has the ability to operate at wind speeds of up to 180km/h.

Motorwind micro-turbines are lightweight, small in size, and flexible. This contributes to its easy installation process in both rural and urban environments. It is equally useful in the office and home.

Motorwind turbines give users a new option for efficient renewable energy, thus minimising the negative impact on the environment.

Due to its unique generation method of Mass Parallel Processing (MMP), Phieco is confident that motorwind is the next generation in wind turbines.

A need for consistent energy

Marketing company, Phieco, specialises in the design, development, manufacture and distribution of quality renewable energy package solutions and products. It is currently the primary marketer of the motorwind system.

Negotiations are in place for Phieco to start production of motorwind turbines locally to supply South Africa and other African countries.

Started by directors James Lech and Roland Walker in October 2007, Phieco plans to focus on green housing and wind turbines.

Due to the company’s strict selection criteria, Phieco has developed a first-class track record for stable and consistent product and service supply.

Much of Phieco’s success can be attributed to its policy of supporting products and brands that have undergone extensive in-house testing. This, the company says, has created excellent relationships with their clients.

South Africa’s not the only country that has benefited from Phieco’s successes. It has clinched a major deal with HSBC of Hong Kong and plans are underway to install motorwind turbines at a Mozambican resort.

According to Lech, the company is set to offer energy generating alternatives to companies in South Africa. “We have installed the first wind-turbine supported billboard in Bryanston (north of Johannesburg)” says Lech. The company is confident that the results of this installation will encourage other local users to join the fight against pollution.

Lech claims that solar panels provide between 20% and 40% of the energy required, while the motorwind turbines provide up to 80% of the required energy.

Apart from the billboard unit in Bryanston, Phieco has installed a trial system for the Department of Minerals and Energy. The current cost of the system is estimated to be between R3 400 ($440) for 20 turbines and R3.4-million ($440 000) for 20 000 units, which will produce 220kW of energy.

Each motorwind unit has a diameter of 25cm, with power output per square meter at 166W.

Lech says that even a set of 20 turbines, of one square metre, would have a positive impact on the environment. The turbines reportedly eliminate the equivalent of 0.072 tons of carbon monoxide a year, 340g of sulphur dioxide and 100g of nitrous oxide, which is usually emitted by fossil fuels. The turbines are made from recycled plastic, which, in turn, can be recycled again.

Phieco currently employs 11 people and has 50 international subcontractors. With their primary vision of “Helping our customers to help their customers”, the company strives towards this goal by nurturing close relationships with their business partners.

Some of the services provided by Phieco include conducting “energy audits”. This is the first step in going “green” or installing a renewable energy system. An energy audit enables the exact identification of the state of an organisation’s energy usage and needs.

From this assessment, the company then provides recommendations with an array of simple and innovative cost effective solutions. Often, audited companies are put on an “energy diet” where they are taught how to use the new products in order to cut down on energy usage, without losing production efficiency.

The homes will not only benefit people within the lower income bracket, but will also cater for middle and high income households, as well as luxury homes. The project will also include industrial businesses, the retail sector and office buildings.

Inspired by Marcus Behrman an artist, inventor and passionate lover of South Africa, the foundation is at the cutting edge of simple, strong, stable and low-cost eco-green housing technologies. Behrman passed away in 2007.

According to the foundation’s website, “Each home is focused on quality and aimed at lasting close to 400 years or more, resulting in an asset that can be passed on from generation to generation.”

One of the many significant projects of the foundation includes the building of the Soweto Hospice Childcare Centre. Construction on this healthcare facility started in February, 2008.