Amid debate on growing cellphone usage in schools, South Africa’s Meraka Institute is piloting a project that makes use of innovative applications to turn the handheld devices into instruments of learning.

Begun 18 months ago and running for a further two years, the project – dubbed MobilED – is being conducted in collaboration with the University of Pretoria and Finland’s Helsinki University of Art and Design. Participating schools include Cornwall Hill College and Irene Middle School in Centurion, Pretoria.

According to lead researcher Merryl Ford, MobilED has shown that cellphones can be very useful where students have limited access to information sources such as libraries or the internet.

In a statement issued last week, the Council for Scientific and Industrial Research (CSIR), which manages the Meraka Institute, said the project “will be piloted internationally by countries such as Brazil, Indonesia, the Philippines and Finland. Interest has also been shown by New Zealand, Mexico, Colombia and Mozambique.”

Audio-Wikipedia
The first mobile function developed by MobilED was an “audio-Wikipedia” – Wikipedia is a popular online encyclopaedia – from which students can receive information.

“Children send an SMS with a keyword to a cellphone number,” Ford explains. “In response, they receive a call and a speech synthesiser ‘reads’ an article on the subject. Both the fast forward or rewind functionalities can be used, almost like old analogue tape recordings.”

The group is also developing an MMS (multimedia message service) content-addition and delivery module. All the innovations are being tested in real classroom situations with direct feedback from children and teachers.

Tapping into MXit
Another MobilED innovation seeks to make educational use of MXit, a locally developed chat programme that allows mobile users to converse with each other at the fraction of the usual cost of sending text messages – an application so popular that it is causing headaches for South African teachers.

One of MobilED’s researchers has started a “Doctor Maths” service offering maths support to high-school MXit users, and the Meraka Institute is working on making the service available through other chat platforms as well.

“With a reported million school-going children having subscribed to MXit, one can hardly ignore this tool,” says Ford.

The people’s computer
According to the CSIR, today’s high-end mobile phones have the computing power of a mid-1990s personal computer, while consuming only one-hundredth of the energy. “Even the simplest, voice-only phones have more complex and powerful chips than the on-board computer that landed a spaceship on the moon in 1969,” the CSIR notes.

“It seems a great pity that our children and teachers are not using one of the most accessible, affordable computing devices in the developing world in more positive ways,” says Ford.

Asked whether the new tool would not infringe school policies on cellphone use, Ford says: “The internet has resulted in immensely powerful, positive business applications, but is also used in not-so noble applications. While the irresponsible use of cellphones by learners has caused an uproar, we should not ignore the untapped latent applications and benefits.

Facing the dangers
“Since we live in the new digital age, it is imperative that teenagers are taught life skills for this digital age,” Ford argues, noting that it is the role of parents and teachers to inform children of the issues that may be faced. “We warn children at a young age not to speak to strangers – this needs to be translated to the online world too.”

As part of the pilot, students’ messaging costs are being covered by the CSIR. At the same time, the MobilED team is investigating ways of making the service affordable to scholars around South Africa.

“I am extremely excited by the results of this pilot project,” says Ford. “It has been hugely successful.” 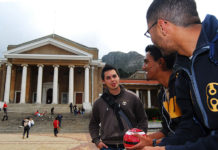