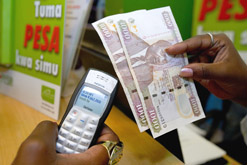 M-Pesa, the new system of sending money
via mobile phones has been a success
story in Kenya.
(Image: International Chamber of
Commerce)

A new system of sending money via mobile phones in Africa is fast becoming the standard way of person-to-person financial transactions.

In Kenya, M-PESA, the network operating the virtual cash system has become an instant hit.

According to the network operator, the system is a cheap, safe and easy way of sending money to their loved ones, as they no long have to physically go to a bank to deposit the cash.

Safaricom launched M-PESA in March 2007 and now has more than six-million users.

Safaricom partnered with Kenya Commercial Bank, who made it possible for non-account holders to send and receive money via their mobile phones.

The mobile network took advantage of the lack of adequate banking systems in the country, especially the scarcity of bank branches.

In Kenya, only one in five people have access to banking facilities, mainly due to the high transaction fees, which deter people from opening and maintaining accounts.

The rapidly increasing amount of mobile phone users has contributed to the popularity of M-PESA.

According to Groupe Speciale Mobile Association (GMSA) in 2007 there were 270-million mobile phone users in Africa, compared to just 50-million in 2003.

Speaking to news agency Reuters about M-PESA, Safaricom chief executive officer Michael Joseph said they still plan on introducing more exciting virtual cash products. “This is just the beginning. What [we] are moving towards is a person going out without cash in his pocket.”

“We see it as a tool to create stickiness. Yes, it’s a revenue service but at the cost of an SMS, you’re not going to get rich quickly.”

Agriculture companies in Kenya have also warmed to the idea with many plantation managers now using M-PESA to pay salaries.

In recognition for its contribution to mobile technology, M-PESA won the Best Mobile Money Service at the GMSA Global Mobile Awards in Barcelona, Spain in February 2009.

Joseph, who accepted the award, said the company was proud of the inroads made by M-PESA, “We are very proud of the M-PESA service. It continues to impact positively on the millions of Kenyans who have no access to banking services.

“I would like to thank everyone who has worked tirelessly to ensure that M-PESA is the success it is,” he said.

Joining the world of e-banking

Africa is joining the world in benefiting from the technology of mobile banking.

In Japan, where the system was developed, over 55-million handsets have the e-money function built into them.

E-money has since become a reality for most Japanese people with the built-in software readily available on most mobile phones.

The mobile phones and smart cards are used to buy items from convenience stores, department stores, restaurants, newsstands, supermarkets, and a variety of other retailers.

Wizzit account holders can use any mobile phone to transfer money from one person to another.

The system is even compatible with the cheaper, older models mostly used in poor communities.