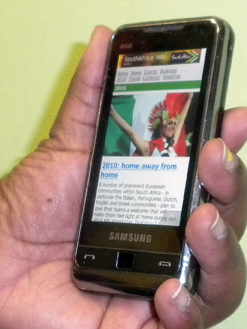 The use of mobile internet services has exploded in South Africa, with 3.6-million people now using their cellphones to browse the web and 4.5-million using mobile instant messaging.

This has emerged from the Mobile Internet in South Africa 2010 study, conducted by specialist technology research agency World Wide Worx and backed by First National Bank.

“It is clear that the cellphone has the potential to take South Africans across the digital divide,” said Arthur Goldstuck, the MD of World Wide Worx.

The report, released today, shows that the use of specific applications such as Mxit and Facebook Mobile far outpace browsing on the phone, even though both are available on almost two-thirds of the phones used by South Africa’s urban cellular users.

While 28% of the urban cellular market is using mobile instant messaging (IM), as many as 65% have the capacity on their phones, meaning that only 4.5-million out of 10.5-million potential mobile IM users actually use it. In many cases, an application has been installed on the phone, and the owner may even have registered to use the service, but is not in fact a user.

And, while 60% of users in this market have phones that can browse the internet, only 21% report that they use this form of mobile internet access.

“It is quite startling to find how many have these features on their phones but don’t use them, either out of ignorance or because of cost concerns,” said Goldstuck.

“The truth is, many people with these applications on their phones do no use them and do not even know how to use them,” said Goldstuck. “The phones themselves need to become more user-friendly, and a vast amount of consumer education is needed.”

“Customers either do not know how to access it via their cellphone, or their phone needs to be configured first in order to access,” he said.

“However, with technology lifecycles, the adoption to internet banking via the cellphone will feature more prominently in future.”