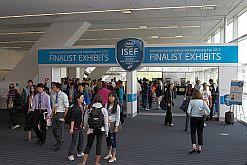 The Intel International Science and Engineering Faire provides a forum for more than 1 500 high school pupils from about 70 countries around the world to showcase their independent research and vie for the awards on offer.
(Image: Society for Science and the Public) 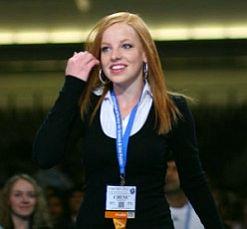 Chené Mostert is not a newcomer to science fairs and has been a regular at the Eskom Expo for Young Scientists since she was in third grade.
(Image: Hip2B2)

While brushing her teeth one night at her home in Ladysmith, KwaZulu-Natal, 17-year-old Chené Mostert caught sight of the toilet that stands next to the basin in her family’s bathroom. Her mind raced to the realisation that – as she had been taught at school – cold, wet places like that toilet are ideal breeding places for bacteria.

Just over a year later, an idea that crept into her head on that auspicious night has won her an international award at the Intel International Science and Engineering Fair (Isef) in the US city of Pittsburg. The award was given to her by the American Dental Association Foundation.

Mostert, a matric pupil at Ladysmith High School, took home one of the prizes at the annual competition innovators in May for inventing a device that sterilises toothbrushes. Isef provides a forum for more than 1 500 high school pupils from about 70 countries around the world to showcase their independent research and vie for the awards on offer.

“I take part in the Eskom Expo for Young Scientists every year, and earlier this year I was looking for an idea for a project,” said Mostert, explaining how her inclusion in the US contest came about.

Her project stood out at the local expo and she was one of nine candidates chosen to represent South Africa at Isef.

Not only did the bacteria-busting device win Mostert a US$2 000 (R17 000) cash prize, but she has also been invited by the foundation to return to the US for an opportunity to patent her invention in December.

How the device works

As part of her research, Mostert tested more than 150 used toothbrushes, and found more than 100 different types of bacteria growing on the bristles.

“I tested toothbrushes from all the provinces and from neighbouring countries for the presence of pathogenic bacteria,” she explained to the KZN-based Witness newspaper.

Four disease-causing micro-organisms were found on every one of the toothbrushes she submitted, including agents that cause gum disease and the flu, among others. Another worrying find was a herpes simplex virus, which may lead to oral herpes, an infection that usually carries symptoms such as mouth blisters, sore throat and swollen glands.

“I realised there was nothing on the local market for cleaning toothbrushes, so I designed a plastic box with a rotation system in which toothbrushes can be stored and cleaned,” said Mostert.

The box can hold up to four brushes and contains hydrogen peroxide. To sterilise the brushes, the user has to turn a handle attached to the box, which then puts an internal scrubbing brush to work on getting the bacteria off.

Mostert is a veteran of the Eskom expo, having attended since grade three, or about nine years of age.

“My mind is constantly identifying problems and looking for solutions to make our world a better place.”

Keeping people healthy is one of her ambitions, and Mostert hopes to realise her dream of becoming a paediatrician one day. Her plan is to attend medical school in 2013.

South Africa has had a number of scientists winning prizes for their efforts in the discipline in the past year.

Professor Maryke Labuschagne was honoured with the prestigious international Kwame Nkrumah Scientific Award by the African Union in February 2012.

Labuschagne, a plant breeding scientist at the University of the Free State in Bloemfontein won $100 000 (R804 180) in prize money, which will be used to renovate laboratory facilities in the faculty of natural and agricultural sciences at the university, and to provide bursaries.

In January 2012, Jill Farrant, a leading scientist in the field of plant responses to drought stress, was honoured as one of five exceptional women scientists in the 2012 L’Oréal-Unesco Awards in Life Sciences.

In October 2011 Prof Malegapuru Makgoba was elected vice-president of the International Council for Science (ICSU).

Makgoba, a trained physician and an internationally recognised molecular immunologist, joined the ICSU, one of the oldest NGOs in the world, which was established to promote international scientific activity with the emphasis on research outcomes that will benefit humanity.

Another professor making international waves is Thembela Hillie of the Council of Scientific and Industrial Research.

Hillie, born in Butterworth in the Eastern Cape, was selected by the Massachusetts Institute of Technology’s Sloan School of Management (MIT Sloan) in October 2011 to pursue a one-year mid-career fellowship in innovation and global leadership.