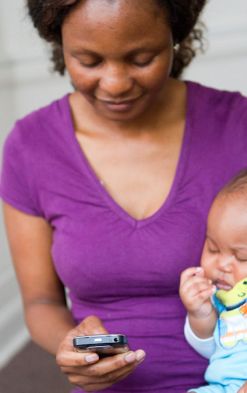 Mothers are going to be empowered through the Mama programme.
(Image: WRHI)

Mobile phones have become integral to our lives – for communication, for entertainment, for learning. And now they can be used to give mothers vital information that could save their lives.

The Mobile Alliance for Maternal Action or Mama provides, via mobile phones, a free information service to empower mothers to make health decisions for themselves and their babies. Mama was launched at the Wits Reproductive Health Institute (WRHI) in Hillbrow, in Johannesburg this week.

Expectant mothers who have signed up receive personalised, stage-based messages two to three times a week, along with encouragement, warning signs and reminders, during their pregnancy. And once the baby is born, for the next year messages of support and information will inform the mother and help her to raise a healthy child.

Mama was launched in the US in 2011 by Hillary Clinton, when she was the American secretary of state. South Africa is the second country in the world, after Bangladesh, to implement Mama in delivering “culturally sensitive, vital health information through mobile phones to mothers living in poverty”, according to a press statement.

In South Africa, maternal health is in crisis – the maternal mortality ratio is estimated at 300 for 100 000 live births, while infant mortality is 40 in 1 000 births, which equates to one in 25 children dying in their first year. Neonatal mortality is at 14 in every 1 000 births in the first eight days of life. The major causes of maternal deaths in South Africa are HIV, followed by haemorrhage and hypertension. In Hillbrow, it is estimated that 30% of mothers are HIV-positive.

At the launch, Mama global director Kirsten Gagnaire, said: “The national launch of Mama South Africa and [its] partnership with the Vodacom Foundation is a significant step for more moms living in poverty, many of whom are living with HIV, to access culturally sensitive, vital health messages to improve their lives and the lives of their babies.”

The WRHI is one of the largest research institutes of Wits University. It grew out of the Reproductive Health Research Unit in 2010, which was established in 1994, and is one of the largest programme implementation, research and training units of its kind in sub-Saharan Africa. It works with the government at national and provincial levels, and has key research sites in Hillbrow and Yeoville in Johannesburg, and in Emgwenya in Mpumalanga.

In its test phase, 2 224 users from two clinics in Hillbrow registered for the Mama service, and 82 000 SMSes sent. These users are accessing the community portal, askmama.mobi, and an interactive quiz service. At present the service is only available in English, but by the end of the month it will be available in Zulu, Sotho, Afrikaans and Xhosa. In time, depending on demand, all 11 languages will be represented.

“Mama SA’s goal is to take the project to scale and reach 500 000 mothers in South Africa in two years,” says Gustav Praekelt of the Praekelt Foundation, Mama’s technology partner, which builds open-source mobile technologies and solutions to improve the health and well-being of people living in poverty.

Praekelt emphasised that access to the free service was through the same number as people used to buy airtime: *120*2112#. A mobi service is also available through mobile phones, which provides users with short articles covering topics like “What if my baby arrives early?” or “Will I lose my job if I take maternity leave?”

It had taken two years to develop the service, and work done in South Africa was used for compiling the global messages, explained Gagnaire.

Mothers can register via their phones, and will get up to three messages a week. Messages consist of advice on when to go to hospital, or what swollen feet might mean, or, once the baby is born, when to introduce solids. “My wish is that all mothers everywhere will have what they need to survive,” Gagnaire stressed.

The service will expand to include voice messages for mothers who are illiterate. And fathers are not excluded – messages directed specifically at fathers are also available, and there is a life guide for dads on the mobi site.

Paneshe Chipikiri, 23, has a three-month-old baby. She says of the service: “I joined when I was pregnant. They [Mama] taught me what to put in my bag and the danger signs to rush to the hospital so I didn’t have any problems with my delivery.”

Another user, Letty Mafu, says: “There is a big need for information. I don’t want anything to happen to my unborn baby. I like to know everything.”

Dr Vivian Black, the director of clinical programmes at WRHI, said: “As an institute we are committed to improving the health of all South Africans. We are specialists in reproductive health so we are particularly committed to ensuring good health care for mothers and their infants. We are delighted to be partners in this important initiative to improve South Africa’s maternal and child health outcomes.”

The national Health Department has committed itself to being involved in Mama.

It is hoped that the service will help South Africa reach Millennium Development Goal Four to reduce the mortality of children under five years of age by two-thirds before 2015, and Goal Five, to reduce maternal mortality by three-quarters by 2015.