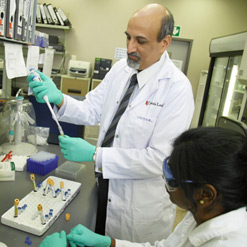 Professor Salim Abdool Karim, director of
Caprisa, at work in one of the centre’s
laboratories.
(Image: Caprisa)

The HIV/Aids prevention community is abuzz with excitement with the news that South African research has developed a vaginal gel – known as a microbicide – that can reduce sexually transmitted HIV infection by as much as 54%.

A two-and-a-half-year study of 889 women by the Durban-based Centre for the Aids Programme of Research in South Africa (Caprisa) found that a vaginal gel containing the antiretroviral drug tenofovir was 39% effective in reducing a woman’s HIV risk when used for about three-quarters of sex acts. It was 54% effective when used more consistently, and also halved the incidence of genital herpes infections.

“Tenofovir gel could fill an important HIV prevention gap by empowering women who are unable to successfully negotiate mutual faithfulness or condom use with their male partners,” said Quarraisha Abdool Karim, one of the lead investigators of the study and associate director of Caprisa.

“This new technology has the potential to alter the course of the HIV epidemic, especially in Southern Africa where young women bear the brunt of this devastating disease.”

More than half of new HIV infections in Africa occur in women and girls. The Caprisa study findings are likely to revive flagging morale among researchers disappointed by two decades of failed efforts to develop a female-controlled method of HIV prevention.

“We are giving hope to women,” Michel Sidibé, executive director of UNAids, said in a statement. “For the first time we have seen results for a woman-initiated and controlled HIV prevention option.

“If confirmed, a microbicide will be a powerful option for the prevention revolution and help us break the trajectory of the Aids epidemic.”

Funded by the South African and US governments, the Caprisa trial involved 889 HIV-negative, sexually active South African women who were considered to be at high risk of HIV infection. Half of the women were given vaginal applicators containing a 1% concentration of tenofovir gel, while the other half were given a placebo gel. The women were asked to insert a dose of the gel 12 hours before sexual intercourse and a second dose within 12 hours after intercourse.

Over the course of the year-long study, 98 women became HIV positive – 38 in the tenofovir gel group compared to 60 in the placebo gel group. On average, adherence to the gel was over 70%, but among women who used the tenofovir gel for more than 80% of sex acts the gel provided greater protection from HIV.

“We believe that the most responsible plan of action now is to quickly and efficiently articulate the sequence of steps necessary for confirmation and follow-up of these results, while also aggressively planning for potential roll-out of a licensable product,” Mitchell Warren, executive director of the Aids Vaccine Advocacy Coalition, said in a statement.

“As exciting as this result is – and as important as it is to follow it up without delay – the reality is that this product will not be available for widespread introduction tomorrow,” Mitchell said. “It is critical to manage expectations while maintaining urgency.”

The research results were published online by Science magazine on Monday.