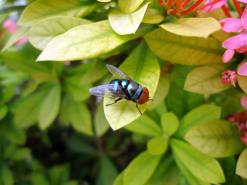 The common housefly could be a big
factor in easing the strain on natural
marine resources, if the Drew brothers
have their way.
(Image: Shadowness)

An enterprising duo has developed a sustainable alternative to fishmeal and soya livestock feeds, in the process helping to ease the pressure on precious natural resources which are constantly under strain from the growing human population.

Originally from the UK, brothers David and Jason Drew are now based in South Africa.

For the last three years the two entrepreneurs have been researching the potential of protein-rich fly larvae or maggots as a natural replacement for soya and fishmeal, the two most commonly used sources of protein animal feed used by industrial farmers.

Their Cape-based company AgriProtein produces maggot meal, a completely natural protein feed for animals. Maggot meal is obtained by harvesting fly larvae fed on organic waste just before the insects turn into pupae. To make one ton of the meal, about five tons of maggots are required.

The larvae are dried and then processed into a fine rich brown powder, to be sold to farmers in 50-kilogramme bags.

In terms of nutrient value the product matches that of fishmeal and is superior to soya.

The fly farm and production plant is based in Stellenbosch and for the moment is producing only for research and development purposes, confirms Jason Drew.

The facility produces two tons of meal a week. Research is conducted with the help of the University of Stellenbosch‘s Animal Nutritional Department.

“We plan to start up a full scale production plant in 2013, which will produce 28 tons per day of the dry product,” says Drew.

The company intends to open plants in South Africa and Germany, the latter country because it is one of the world’s leading green nations.

According to Drew, the demand for protein feed is almost limitless, and one of the biggest chicken producers in Germany is already showing keen interest.

His only concern is whether AgriProtein will be able to keep up with the projected demand of over 2 000 tons per month.

Should other countries show interest, the Drew brothers will consider rolling out the technology to them as well.

At the heart of AgriProtein’s approach is a relatively new concept: nutrient recycling.

Increases in global food demand and pressing environmental challenges have caused prices of both fishmeal and soya feeds to soar in recent years. Fishmeal, for example, has on average almost tripled in price since 2002, according to the IndexMundi data portal.

Using organic waste to create a new source of protein – such as animal protein feed – is one way in which we can save the world’s declining fish resources, believes Drew.

At the AgriProtein plant the flies are fed waste from abattoirs. This natural way of disposing of the waste also helps the suppliers to cut down on their costs. To ensure success of the venture, the company runs two programmes, for breeding and production.

Under natural conditions one female fly can lay about 750 eggs a week and the larva increases in weight by over 400 times in just a few days.

Maggots are harvested just before the pupal stage, or after about 72 hours. They are then dried, milled and packed. Because birds and fish eat larvae in the wild, the magmeal is easily digested.

AgriProtein uses three types of flies: the common housefly (Musca domestica); the black soldier fly (Hermetia illucens) and the blow fly (Calliphoridae family), each of which prefers to break down a specific type of organic waste.

The end product contains nine essential amino acids, according to the AgriProtein website.

And that hint of fishmeal which is sometimes so detectable in battery-reared chickens will also be a thing of the past as maggot meal has a completely neutral taste and odour, Drew confirms.

Like other insects the fly goes through three phases to reach adulthood: egg, larva, pupa and then adult.

One of the most fascinating aspects of these creatures is the ammonia which is produced by fly larvae, a natural secretion used by the creatures to kill bacteria.

In the AgriProtein plant the strong smell of ammonia is a by-product of the production process but one which the Drew brothers still plan to tap into as well.

“We are looking at ways in which to harvest the ammoniated air to make a natural bleach,” says Drew.