Rural communities in Kenya are benefitting from a solar power drive by Green Energy Africa. Maasai women buy the equipment from the organisation, sell it for a small profit, and are empowered to install it themselves. 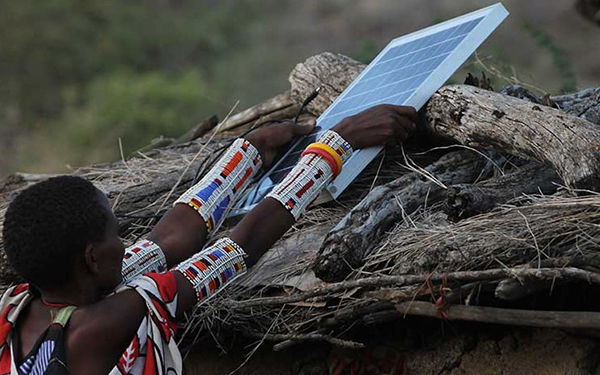 Maasai women are changing their communities for the better by installing solar powered lights in villages. (Image: Green Energy Africa)

When night falls in Kenya’s Kajiado County villages, such as Magadi, residents face danger that is relatively unknown in big, bright cities. Their cattle becomes prey for hyenas and big cats; and they breathe in smoke from the fires and lamps as children try to complete their school work and people try to keep warm and cook their food.

Things are slowly changing, though. An initiative is helping entire villages by providing solar powered lights and empowering women, by teaching them to install these lights themselves.

Jackline Naiputa told news agency Reuters that the impact of solar technology was unparalleled. She heads up the Osopuko-Edonyinap group, one of five taking the lead in spreading alternative energy in the area. “The light scares the hyenas away, so we don’t have to worry about losing our animals at night,” she explained.

In 2014, she lost 10 goats to big cats. Before she got solar lamps installed in her homestead, her son used to brave cold nights in the cattle enclosure to guard her livestock. But now, she and all her children sleep in the warmth of indoors.

The initiative, by Green Energy Africa (GEA), is called Women and Entrepreneurship in Renewable Energy Project (Werep). The goal is to convert the whole of Kajiado County to solar power.

The organisation trains women to install solar devices themselves on to homes. The women buy the energy-efficient lights, solar panels, and rechargeable batteries from GEA at a discounted rate. They use donkeys to transport them across various villages, and sell them for a small profit. 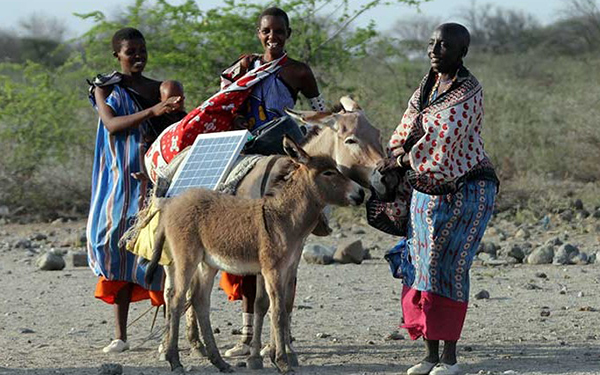 “The solar energy drive began around September 2014,” the organisation said. “And so far about 2 000 households in the country have adopted solar technology.” There have been 200 women participating in the Werep initiative.

According to GEA, only 23% of Kenyans have access to the national electricity grid and only 5% of rural communities are connected.

Besides being able to protect their cattle, and their children being able to study at night, there are other perks to using solar energy. It is much cheaper than both kerosene and firewood.

“The nearest market where one can charge a cellphone or buy kerosene is 15 kilometres away, and it is only held one day a week,” Naiputa explained.

Before the installation of the solar panels, she would spend 40 Kenyan shillings (about R5) a day on kerosene and 100 shillings a week to charge the family’s two mobile phones.

Fewer trees are also being cut for firewood. The National Environmental Management Authority has said that chopping down trees means they now cover just 1% of the land area.

There will also be overall improved health benefits as less fire smoke is inhaled. “According to a 2014 World Health Organization report, household smoke was responsible for 1.6 million deaths worldwide,” noted Reuters.

“Our community customs do not allow women to own any property,” Naiputa said. “But now women here own the solar technology, and it is something we are very happy about.”