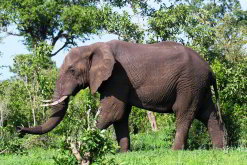 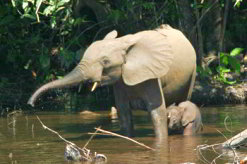 The forest elephant is found in the
tropical regions of West Africa.
(Image: Thomas Breuer, The Animal Files)

A debate that has raged for a decade could soon be put to bed, with the publication in the peer-reviewed biology journal Public Library of Science (PLoS) of a study confirming that Africa has two species of elephant, both occurring within the genus Loxodonta (Greek, meaning “oblique-sided tooth”).

Previously the two types, known as savannah and forest elephants, were considered to be sub-species of Loxodonta africana. Researchers are now proposing that the savannah elephant be officially classified as L. africana and the forest elephant as L. cyclotis.

An international team of scientists from both sides of the Atlantic analysed the nuclear DNA of modern elephants from Asia and Africa, comparing the samples with the ancient American mastodon (Mammut americanum) and woolly mammoth (Mammuthus primigenius). Both of these large mammals roamed the earth for thousands of years, disappearing for ever about 11 000 years ago.

The study revealed that the Asian elephant is the mammoth’s closest living relative, and began to separate genetically from its ancestor about 2.6- to 5.4-million years ago.

The team found that the two African species of elephants began to diverge at around the same time, probably because of an increasingly warm and dry climate on the continent that drove some animals out of the forests and onto the grasslands.

Because the mammoth and its relative are deemed to be genetically distinct, the research team is confident that the same ancient divergence between the two African types should lead to their classification as two species.

“You can no more call African elephants the same species than you can Asian elephants and the mammoth,” said Harvard Medical School population geneticist David Reich, one of the study’s lead authors.

It is now up to the International Union for Conservation of Nature’s (IUCN) African Elephant Specialist Group, based in Nairobi, to decide if these conclusions are valid. If so, L. africana africana and L. africana cyclotis will lose their middle names.

The IUCN currently views all African elephants as one species, which is classified as vulnerable on the IUSN Red List of endangered animals.

The study that started it all was published in Science journal in 2001. Titled Genetic Evidence for Two Species of Elephant in Africa, it analysed the DNA of 195 free-ranging elephants from different populations, and was the first to propose the theory of two species.

Much of the argument was based on morphological differences such as overall size, tusk and ear size and shape, and number of toenails.

Most likely because of its wide-open habitat, the savannah elephant stands about 1m higher at the shoulder than the forest elephant, and can weigh up to seven tons, twice as much as its smaller relative, which also has rounder ears. The savannah elephant normally has four toenails on the front foot and three on the hind foot, while the forest elephant normally has five toenails on the front foot and four on the hind.

Also, the forest elephants, found in West Africa’s tropical areas, were seen to live in much smaller groups than the savannah variety, which live on the plains of Southern and East Africa.

Taxonomists argued, however, that even such distinct physical characteristics don’t necessarily mean the tuskers are two different species.

Other studies then cast doubt on these controversial findings by showing that a small number of savannah elephants shared their mitochondrial DNA with forest elephants, which suggested a common maternal ancestor about half a million years ago.

Found in the cell’s power pack or mitochondrion, mitochondrial DNA is passed down from female to female. A study of an animal’s nuclear genome gives a broader and more accurate view of its genetic history.

The latest study could be the one that convinces the sceptics. Key to the project was the introduction of the ancient mammoth and mastodon genetic material, which allowed researchers to pin-point the time at which the animals began to diverge genetically.

“We had a major challenge to extract DNA sequences from the two mammoth and mastodon fossils,” said team member and evolutionary geneticist Nadin Rohland of Harvard Medical School’s Department of Genetics, “and line them up with DNA from modern elephants over hundreds of sections of the genome.”

The study featured the first-ever sequencing of the mastodon’s nuclear genome.

The researchers also found that the split between the two elephant species went back as far as that between humans and chimpanzees.

In terms of conserving the elephants, since each type now has a smaller population than first thought and may face different pressures, more specific conservation measures are needed. The forest elephant, said the team, is under threat from deforestation and human settlement and should be prioritised.

“This work has immediate consequences for the conservation of elephants,” said conservation geneticist Sergios-Orestis Kolokotronis of the American Museum of Natural History.