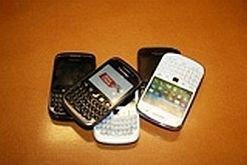 Blackberry users around the world have chosen a South African app as one of their favourites.
(Image: Musa Mkalipi) 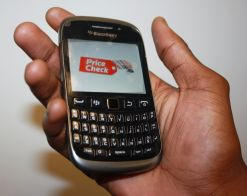 Price Check is one of three finalists for the International Blackberry App of the Year award.
(Image: Musa Mkalipi) 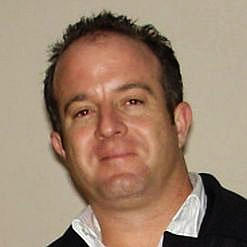 The South African-designed smartphone app, Price Check, has got the nod from Blackberry users, who have nominated it for this year’s Blackberry achievement awards.

An online price comparison app, Price Check is locally created and released. It has been nominated under the International Blackberry App of the Year category, which is open to businesses and entrepreneurs, as well as developers.

The awards recognise innovation, bringing to the fore the latest technological ventures. According to Blackberry, they aim to recognise the contributions of creative thinkers from across the globe.

“Being selected out of more than 100 000 Blackberry 10 apps worldwide is quite a milestone,” says Price Check GM, Andre De Wet, adding that as South Africans we can be pretty pleased about it. “It shows that what has been done locally on mobile is world class.”

Price Check was developed in 2006 by Kevin Tucker, who saw the advantages of online shopping. With one click of a button, it enables the average person looking for the best or the most affordable goods to compare prices from various online stores. Be it for viewing or purchasing, retailers can be certain that their products are seen by thousands of online shoppers.

It is available on Nokia, Android and Blackberry. Price Check has more than 860 000 visitors a month, 30-million products listed, 6 000 product categories and over 400 online shops. And with mobile technology penetrating deeper in Africa, the market for this and other apps is expanding.

It was shortlisted alongside the Hoyts cinema app and the Cooklet app.

The winner will receive a package prize consisting of one plane ticket to the Blackberry Live 2013 in Orlando, Florida, in the US; five Blackberry 10 smartphones; and a Blackberry service package that includes onsite training and certification aimed at improving the knowledge and skills of technical professionals working on the platform.

Voting began on 28 March and closes on 15 April. Winners will be announced between 14 and 16 May.

A technological revolution has taken place – Africa now has over 735-million mobile users, according to IBM, which in essence means that it has more users than the US as well as the EU. Technology levels continue to grow within the continent.

Africa is fast becoming a leading light in ICT, with countries such as Kenya using GPS devices to map, record and prevent deforestation. Kenya is one of the most advanced countries on the continent in terms of mobile innovation and technology.

One of its notable breakthroughs is M-Pesa, launched in 2007, which enables people to send and receive money with just the use of a mobile phone. M-Pesa had 620-million subscribers at the end of 2011 with 19-million in Kenya alone, says The East African, a weekly publication that focuses on economic and political issues in the region.

Nigeria has also seen growth in this field. Over a decade ago there were about 100 000 phone lines which were mostly run by state-owned telecoms operators. Today more than 100-million mobile phones are being used, making it Africa’s largest telecoms market, according to statistics from the Nigerian Communications Commission.

An even more astonishing development was the development of Africa’s first Android tablet by a young entrepreneur from Congo, Verone Mankou. The “Way C” tablet is roughly the same size as a Samsung Galaxy tablet, and comes with Wi-Fi connectivity and 4GB of internal memory.

As new products and services are introduced, more and more Africans are keeping up with the times to ensure that they too are part of the revolution that is technology.