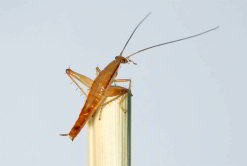 The leaproach looks like a cross between
a cockroach, a cricket and a grasshopper. 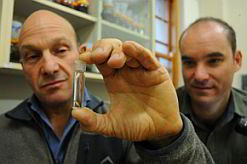 A University of Cape Town (UCT) professor and a former student have again made entomological history by discovering the world’s first jumping cockroach, now named the leaproach (Saltoblattella montistabularis).

Prof Mike Picker, from UCT’s zoology department, and Dr Jonathan Colville discovered the intriguing insect, which has since been added to the list of top 10 new species for 2011 by the International Institute for Species Exploration (IISE) at Arizona State University.

The previously unknown bug was first spotted leaping around at the Table Mountain National Park in Cape Town in 2006, as the pair searched for flies during a research project.

Their first discovery was the new suborder Mantophasmatodea – comprising carnivorous insects known as gladiator bugs or heelwalkers – in South Africa in 2002.

The two biologists described their discovery in the German scientific journal Arthropod Systematics and Phylogeny in 2010. The publication was formerly known as Entomologische Abhandlungen.

Picker and Colville wrote a second paper with Malcolm Burrows from Cambridge University, this time detailing what makes the little bug such a good jumper and also its relation to what is believed to be the only other known jumping cockroach, the late Jurassic 160-million-year-old fossil Skok svaba. This extinct creature was first described in 2007.

Speaking of their latest find, Picker said: “We were sweep netting and saw something that at first looked like a grasshopper, but when we got it back to the laboratory it became clear it was a cockroach, closely related to the common roach but with sophisticated hind legs and the ability to jump many times its own height.”

The leaproach measures a modest centimetre in length, and looks like a cross between a cockroach, a cricket and a grasshopper. Its Latin name is derived from Saltoblattella which means jumping small cockroach, while montistabularis refers to the place it was discovered.

Colville said: “Superficially it resembled a cricket, but not quite.”

The leaproach shares certain features with grasshoppers – large muscular hind legs for jumping; bulging eyes; toes that allow them to grip before and after jumping; and a strengthened antennae base which supports the delicate appendages during jumping.

There are about 4 000 to 5 000 species of cockroaches but so far only the leaproach is able to jump in the same agile manner as a grasshopper.

The IISE’s Quentin Wheeler said: “Most people do not realise just how incomplete our knowledge of Earth’s species is. We are surrounded by such an exuberance of species diversity that we too often take it for granted.”

Picker described the Cape’s insect fauna as “spectacular and distinctive”, and added that up to now this natural wealth has been under-appreciated.

With the leaproach discovery in the Table Mountain park, a World Heritage site, the pair suspects that other species may be waiting to be discovered.

Picker and Colville believe that their discovery highlights how little is known about the Cape fauna, which could be home to more interesting species than even the celebrated Cape Floral Kingdom.

“Thus far, the leaproach is only known from that single locality, adding to the impressive biodiversity profile of this World Heritage site,” said Picker.

Although there is the potential for other discoveries in the area, he cautioned ambitious scientists that Table Mountain is a highly protected area and plants and animals can’t be removed from it without permission.

The leaproach has now been named as one of the Top 10 New Species for 2011 by the US-based IISE. Each year the IISE releases a list of what it considers to be the 10 best natural finds of the year before.

Although the final list is chosen by a committee, anyone may nominate a species, provided that it was described for the first time during the year in question.

Three other African species were included – Philantomba walteri, a new species of duiker first seen at a bushmeat market in Benin; Darwin’s bark spider (Caerostris darwini), a type of orb weaving spider native to Madagascar; and the pollinating cricket (Glomeremus orchidophilus) from Réunion, the first of its kind seen to pollinate the orchid Angraecum cadetii.

The list is rounded out by the bioluminescent mushroom Mycena luxaeterna from Brazil; a bacterium known as Halomonas titanicae which is one of several that’s eating away at the sunken Titanic; the two-metre-long monitor lizard Varanus bitatawa from the Philippines; the Peruvian leech Tyrannobdella rex; the underwater mushroom Psathyrella aquatic, found in the US; and the pancake batfish Halieutichthys intermedius, found in the Mexican Gulf.