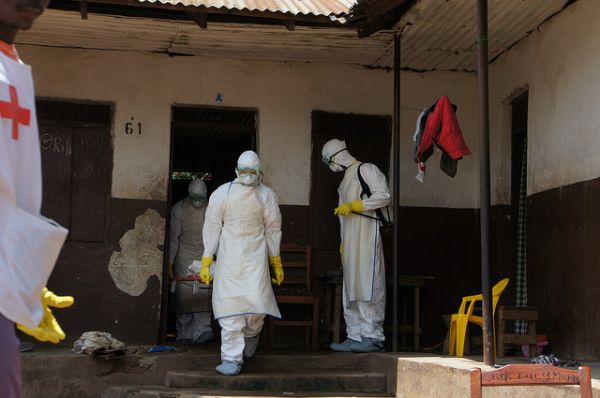 Four months after the first case of Ebola was confirmed in Guinea, more than 1200 people have been infected across 3 West African countries. (Image: European Commission)

Researchers say they have pinpointed the source of the latest Ebola outbreak. A bat bit a toddler from the village of Meliandoua in eastern Guinea. Within a week both the boy and his mother were dead, and the infection spread as mourners left the funeral to return home.

A little over 1300 people have died from the Ebola virus since December 2013; more people die from malaria and tuberculosis, TB, annually, but hysteria has slowed attempts to contain and fight the outbreak. African countries have restricted travel and closed their borders as the virus has spread through the continent’s west and central areas.

There is no effective pharmaceutical treatment for Ebola but western aid workers and doctors that have been infected have been shipped home in isolation chambers to be treated with experimental drugs. Some have proven effective, but would be prohibitively expensive to manufacture and dispense these as the patents are held by for-profit drug companies. 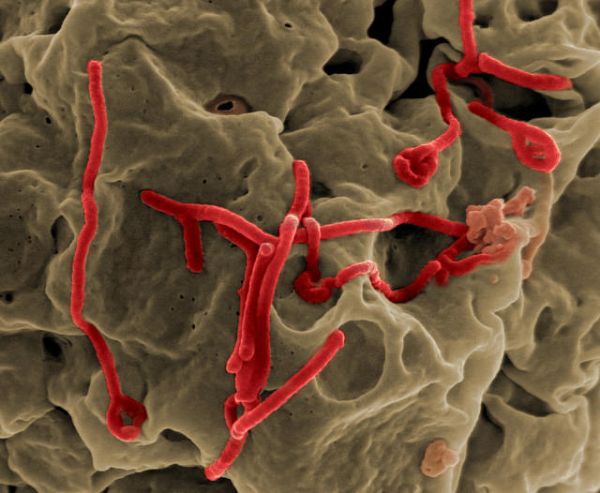 Scanning electron micrograph of Ebola virus budding from the surface of a Vero cell. (Image: NIAID)

South Africa’s National Institute for Communicable Diseases (NICD) is at the forefront of publicly funded research. Professor Janusz Paweska, head of the Institute’s special pathogens department, believes the work his unit has been doing will help calm the continent.

His unit made the link between migratory bats and the latest outbreak. The large bats, the size of chickens, are eaten by poorer people in rural areas and are known to be carriers of the virus, which is transmitted when people eat the infected meat.

At the state-of-the-art research facility in Sandringham, Johannesburg, Paweska and his team – 11 post-doctoral and masters students from Zambia, Tanzania, Mozambique and Congo – endure stringent safety measures to ensure that the virus does not escape the lab.

Enclosed in plastic bio-hazard suits, each with its own oxygen supply, the researchers enter through a series of sealed doors before enduring a chemical shower to wash away foreign particles. Then only can they enter the animal room where they study bats brought back from rural Congo. “There are many groups who are trying [to find the virus]. This is one of the most hunted treasures in modern virology but no one has succeeded yet to isolate the virus from wildlife,” said Paweska.

The virus is so deadly that teams entering the animal room are restricted to two researchers. The biggest problem for Paweska and his team is the question of transmittance. “We don’t know if it is excreted through urine or saliva and how is it transmitted between the bats. We believe that most outbreaks begin with people eating infected meat, but we don’t know for certain.”

ZMapp is an experimental drug developed by Mapp Biopharmaceutical, a San Diego-based pharmaceutical conglomerate. Though it is still in the testing phase, the drug has been approved for testing on humans by the World Health Organization (WHO). Tested on two American aid workers and three Liberian doctors it has proven to be the most effective treatment available. The Canadian government has donated a thousand doses of a Canadian-developed treatment to the WHO for use in Africa after Mapp announced that it had exhausted its supply of ZMapp.

The search for an Ebola vaccine is not new. In 2003 Dr Anthony Fauci, director of the American National Institute of Allergy and Infectious Diseases (NIAID), confirmed that the first phase of testing on human subjects had begun.

The vaccine, developed three years prior and tested on primates, showed promise. That trial vaccine protected monkeys from lethal infection, and a variant was then developed for human testing. That variant, called a DNA vaccine, does not contain an active strain of the virus and is similar to the kind of vaccine then being developed to control diseases such as AIDS, influenza, malaria and hepatitis.

The trial vaccine contains an inert strain of the virus that is designed to mislead the body into developing antibodies. The modified, inactive strain causes the body to develop a broad immune response to the infection. The vaccine is the first stage of a two-stage regimen called a prime boost. The DNA vaccine is the primer that boosts the body immune response, while a second inoculation sets the body up to react to future Ebola infections by creating proteins to fight infection.

At the press briefing announcing the 2003 trials Fauci explained the reasons behind developing the vaccine: “Our accelerated effort to understand and combat Ebola infection is part of the NIAID commitment to its biodefense mission. An effective Ebola vaccine not only would provide a life-saving advance in countries where the disease occurs naturally, it also would provide a medical tool to discourage the use of Ebola virus as an agent of bioterrorism.”

The first major Ebola outbreak took place in 1976 killing 431 people, including 12 aid workers, in Sudan and the DRC (then known as Zaire). No proven, effective treatment has been developed and the mortality rate remains at 90% for those infected.

What has held back research is money. The giant pharmaceutical companies see no value in developing a cure for a drug that will be used rarely and only on small numbers of infected people. Investment in research will have to be done by teams from organisations like the NICD. This, aid groups and researchers believe, is the only realistic chance of developing a vaccine in the future.