Khi Solar One forms part of the Department of Energy’s bid to bring 1 400 MW of wind and solar-based energy online by 2016, for which it has invested R33.8-billion. It is part of the South African government’s larger strategy to generate 17 800 MW from renewable energies by 2030.

Drive west of the town of Upington, along the N14 in the Northern Cape and all you’ll see is desert. But a few kilometres later a tower looms on the horizon, growing inconceivably larger as you approach.

To get to it you make your way along a bumpy dirt road for five kilometres. And there you are, facing a 200-metre cylinder stretching to the sky, surrounded by more than 4 000 massive, wall-like solar mirrors. You’d think you’d stumbled on the set of a science fiction film. But this is Khi Solar One, Africa’s first concentrated solar power project.

The 140-hectare plant is the brainchild of Spanish company Abengoa Solar. It will produce 50 megawatts (MW) of energy and reduce South Africa’s carbon dioxide emissions by about 138 000 metric tons a year.

Abengoa is the project’s major investor with a 51% stake, its partner, while South Africa’s Industrial Development Corporation (IDC) owns 49% of the project. Both organisations remain mum about the amount they have invested in Khi Solar One. But Abengoa has given some indication of the huge cost of the project: it said both Khi Solar One and the upcoming KaXu Solar One, also in the Northern Cape, are worth €1-billion (R14.9-billion) combined.

Khi Solar One forms part of the Department of Energy’s bid to bring 1 400 MW of wind and solar-based energy online by 2016, for which it has invested R33.8-billion. It is part of the South African government’s larger strategy to generate 17 800 MW from renewable energies by 2030.

According to Kurt Drewes, Khi Solar One’s general manager, the plant is likely to go online within a year. “The plan is to get it up and running by the end of 2014, but it will most likely start in early 2015.”

The energy produced will be sold to Eskom to channel it to the national grid. Drewes said it would serve South Africans in the evenings, when energy use is at its peak.

From sun’s rays to superheated steam

At the heart of the plant is the hollowed-out superheated steam solar tower. Stretching at 205 metres – taller than Ponte City in Johannesburg – the tower is surrounded by 4 200 concave solar mirror panels. These are tilted at an angle that reflects the sun’s rays onto the top of the tower. According to Drewes, each panel has an autonomous computerised control system with a GPS signal that tells it the exact time of day. “It determines which angle the sun is at and which angle it should be in for light to be reflected to the top of the tower.”

The tower is filled with boiling tubes, painted black to absorb heat from the reflection. These contain high-pressure water pumped from the Orange River. When the sun’s rays are reflected onto the tubes, the water heats to boiling point and becomes steam. The steam is heated further, to 500º C, to create enough pressure to turn the turbine and produce electricity.

The tower has a dry-cooling system, a new innovation in concentrated solar power, or CSP. The walls, Drewes said, have openings to allow in air, making it both a heating and cooling tower when required.

According to Drewes, CSP is the only renewable energy technology that can effectively store power. Khi Solar One has the longest steam storage capacity – two hours – in the world. Although this may seem short, the advantage of CSP is that supply can be adjusted to meet the demand. If capacity needs to be increased, they do not have to make the tower bigger. They would simply increase the surface of the mirrors, which Drewes said is easy to do.

Mehmood Ahmed, the IDC’s regional manager in the Northern Cape, said Khi Solar One is a large part of the province’s growing renewable energy industry. The sector currently makes up the bulk of the IDC Northern Cape’s investments with 12 projects approved for funding. “The renewable energies sector in the province has been growing rapidly in the last few years.”

Ahmed said that by October 2013, the sector already made up R5.5-billion of the Northern Cape IDC’s estimated R14-billion exposure, second only to mining at R7-billion. In terms of exposure, Ahmed said the investments have made his regional office the second-highest funder within the IDC, behind Gauteng.

However, Ahmed said his office has a problem in getting foreign companies like Abengoa to use local labour and hire local service providers. “The issue is there are no secondary industries in the province, like manufacturing, so how does one make the case for localisation?”

Drewes said Abengoa have set up their own fabrication facility at Khi Solar One where they manufacture the tubes and other material for the CSP. Specialised staff have also been flown in from Spain to see to the manufacturing and constructions processes.

The IDC, according to Ahmed, invests in solar projects and then buys a portion of shares to distribute to surrounding communities. This offsets the fact that most solar power plants do not employ a lot of people once they are complete and in operation. He said once the projects generate dividends, the IDC will allocate 20% of its stake to the Khi Community Trust, which dispenses funds to the community. “We need to be more hands-on with these green projects, to keep tabs on them and make sure they do what they had promised to do.”

Drewes said the community trust is a positive move. “It is important to have forces in your system that balance out wealth.”

Abengoa and IDC’s other solar project

The IDC has partnered with Abengoa on another solar project called KaXu Solar One, a parabolic trough plant located near Pofadder, which is still under construction and is set to come online this year.

Covering an area of 1 100 hectares, it will have an output of 100 MW and a storage capacity of three hours. It will also reduce carbon dioxide emissions by 315 000 metric tons. Abengoa said it would create 800 jobs during construction phase and 35 permanent plant operations jobs.

KaXu may deliver more energy, have a better storage capacity and reduce 177 000 tons more carbon dioxide than Khi Solar One, but Drewes said the technology does not capture the imagination as much as the CSP tower. “Parabolic troughs have been around for a long time but towers are what get people excited.”

Spain the leaders in CSPs

According to the renewable energy policy network, REN21, the Spanish are the leaders in CSP technology. Its Global Status Report for 2013 said three-quarters of the world’s CSP capacity is in Spain. The Iberian nation now has 46 CSPs with an accumulated output of 1 950 MW, way ahead of the US, which is in second place with 507 MW in operation. The report also considered South Africa as one of the most active markets of 2012 thanks to the construction of Khi Solar One and KaXu Solar One.

The Spanish have been constructing CSPs since 2004, the first being in the Andalusian city of Seville, which Abengoa built. But Drewes said since the 2008 financial crisis devastated the Spanish economy, solar companies have ventured outside of Spain for business.

Drewes said the Spanish construct CSP plants with one idea in mind: to create energy sources able to serve humanity for generations to come. It is an ideal South Africa should apply to all of its renewable energy projects, he said. “South Africans can learn a lot from the Spanish, who have been constructing CSP plants that would serve for hundreds of years.”

Drewes referred to the Aqueduct of Segovia in Spain, which was built by the Romans 2 000 years ago, as an example of forward-thinking construction. Today, it is still in use and provides water to the old part of Segovia. “Our engineers should learn from that. We must build something for forever. The term ‘renewable energies’ means it renews itself. It is immortal. The generations that will follow will say, ‘Thanks, chaps, for giving this to us.'”

He added that although Spain has been one of the economies hardest hit by the economic downturn, it still invests heavily in renewable energies for the benefit of future generations. “They know there will come a time when this financial crisis is over and the next generation will have a greater industrial capacity because of lower energy costs.” 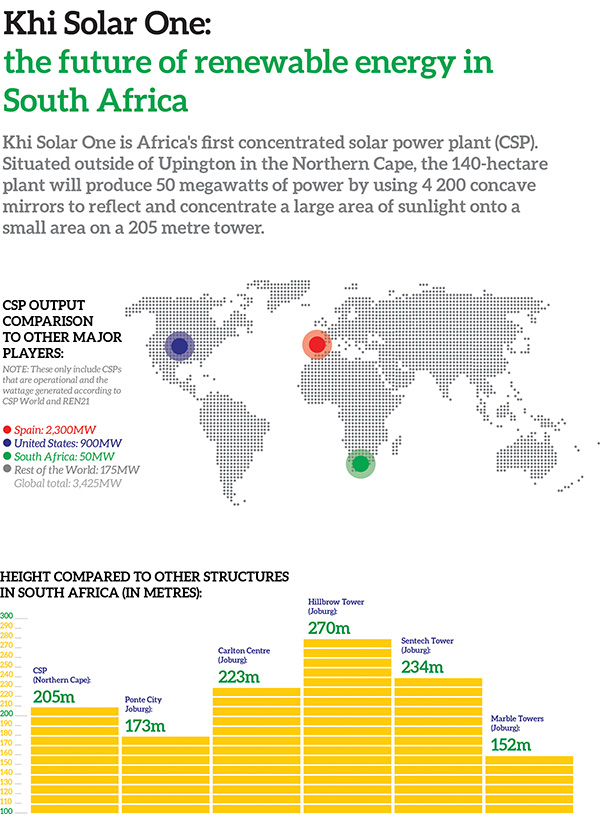 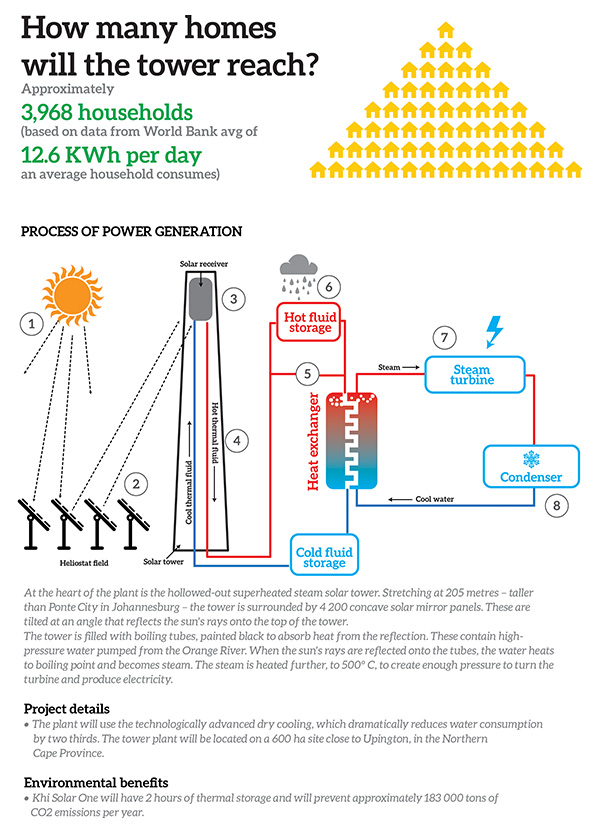