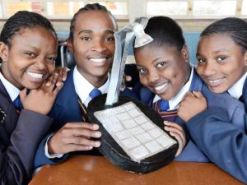 Inspired by recurring power outages and countless fires in informal settlements that disrupt the lives of many families every winter in South Africa, a group of high school pupils from Johannesburg developed an innovative source of light to replace candles and paraffin lamps.

The challenge was for high school pupils around the world to create new business concepts intended to have a positive social and environmental impact in their communities, culminating in the final announcement of the winners at an event in Brussels in July.

“The lamp absorbs light energy from the sun through the use of photovoltaic (PV) cells. The PV cells convert it into electricity, which is used to power the lamp,” explained Odiley.

Mothoa added: “The solar panels also work with artificial lighting. You can charge it for eight hours and the light will last for 100 hours. You don’t have to charge it every day. The solar panels have a life of 25 years.”

The relay, now its second year, was born out of a collaboration between HP and global youth skills development organisation Junior Achievement.

Although the two organisations have worked together over 20 years, the first relay was in 2010, and the aim was to close the gap in the job market between young people who have opportunities to learn about technology from a young age and those who come from disadvantaged backgrounds.

“We would like to congratulate Emulsified Environmentalists for their win. They have made us very proud,” she said, adding that it is a great opportunity for the country to receive recognition.

The first and second runners-up were Team Flower and Egalite from China and Slovakia respectively. Team Flower developed a programme that trains young volunteers to work with the elderly population to document their life stories and help them overcome their loneliness. Egalite’s educational DVD, on the other hand, was designed to raise awareness around issues related to migration.

For the Emulsified team, the win means they have achieved their main goal – to help local communities, they said, while on the other hand they also earned their school recognition in the science field, not to mention improving their social awareness skills.

One of the largest educational initiatives of its kind in the world, the relay has had over 20 000 pupils from 13 countries having participated since its inception. Over 1 500 teams from around the world registered for the 2012 contest.

The participating pupils start off with a three-hour workshop, where they learn about social innovation and then complete an online quiz.

Following that, they group themselves into teams of three to five members, and are required to develop a socially innovative business idea that would alleviate a problem affecting their communities.

Against the backdrop of the contest, a mentorship programme also takes shape as each of the top 20 teams is assigned a coach, usually employed by HP, who serves as a support system. The process continues in the next round, when the 20 teams are cut down to 13 for the final leg of the contest.

Jeannette Weisschuh, director of global education programmes, sustainability and social innovation at HP, commented on the good quality of innovative, socially-orientated business ideas that came out of the competition, especially with the help of mentors.

“The relay is part of HP’s commitment in applying our expertise and technology to help students everywhere gain vital IT and business skills to solve societal issues,” she said.

Through the relay, Junior Achievement aims to bridge the technology gap by bringing innovative ideas and hands-on educational programmes to schools. In this way they equip pupils with technological and entrepreneurial skills for the future.

“This year’s exceptional entries prove that with the right education and resources, today’s youth has the power to tackle some of the world’s biggest challenges,” she said.