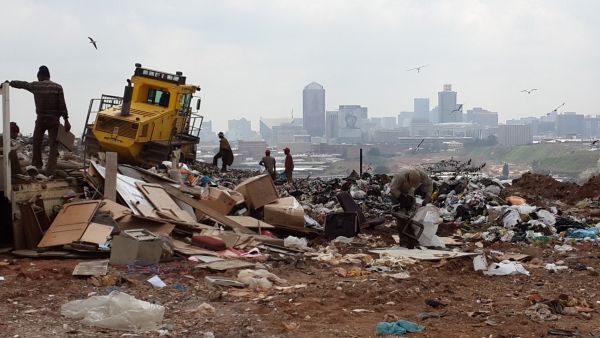 At the top of Johannesburg’s largest landfill site, Robinson Deep, not only is there a 360° view of the CBD and southern suburbs, but it is also the top of the city’s first methane gas-to-power project.

To be operational in early 2015, four 1MW generators, costing about R10-million each, will be installed at the base of the landfill mountain, initially to pump 4MW of energy to national energy supplier Eskom.

Robinson Deep, in the city’s southern suburb of Turffontein, is Joburg’s largest landfill site. Trucks roar up the one-kilometre track to the top from 7.30am to 2am, disgorging their loads on to the growing mountain of garbage. Men in gloves sort out plastic, metal and anything else of value. Once they have separated the recyclables, their loads are weighed and taken to a recycling depot at the base of the landfill.

Joburg has five landfill sites – besides Robinson Deep, there’s Marie Louise in Dobsonville, one each in Linbro Park and Ennerdale, and Goud Koppies in Eldorado Park. Robinson Deep was opened in the 1930s and takes up about 124 acres of land. The methane gas it produces is 21 times more harmful than carbon dioxide. In May 2011, as a result of a flood of complaints about the smell from Robinson Deep, the city started flaring the gas by means of a network of 68 wells sent down into the landfill, to tap the gas. But towards the end of October, an independent power producer, Ener-G Systems Joburg, will start installing the four generators.

Each generator will cost about R10-million, so the total investment for the five sites will be R276-million, says general manager David Cornish of Ener-G Systems. The company has a track record: it installed its first pilot project in Richard’s Bay in KwaZulu-Natal, in 2009; it has developed over 50 projects around the world, producing over 120MW. It is anticipated that the Joburg project will have a life expectancy of up to 20 years.

“Methane from waste is a huge source of atmospheric methane throughout the world and in South Africa it is a significant contributor to our greenhouse gas emissions,” writes Cornish in a document titled “Ener-G Efficient Solutions for South Africa“.

The process started back in 2009, when the city awarded the project to Ener-G Systems. In October 2013, the city was the successful bidder to supply Eskom with power, under the Independent Power Producers programme. It is the only city council in the country to be doing this. When operating at full capacity, the gas from Robinson Deep will produce 5MW of renewable electricity generation capacity, enough for up to 5 000 households, says Cornish.

Gas is also flared at Marie Louise, through 28 wells, and once all five landfill sites are operating to produce power, it will be the largest landfill gas-to-energy programme in the country, producing an estimated 19MW of power, sufficient to supply 12 500 middle-income households. The income from the sale of power to Eskom will amount to R800-million a year. A portion of this will be paid to the city as a royalty, which will largely be used to maintain the sites, says the city’s assistant director of integrated waste management, Simphiwe Mbuli. “We believe for the city it’s a good investment.”

In the meantime, the city continues to make its landfill sites as environmentally friendly as they can be. First, the site is covered with waterproofing, to protect the ground water. Then, as rubbish goes into the landfill, it is covered with 150mm of earth, to reduce the smell and cut down on vermin and flies. Water running off the landfill is channelled away and evaporated. The landfill is also sprayed with disinfectant water so it does not pollute the air.

Mbuli says that the city is looking into other technologies to deal with waste, as its landfill sites fill up. Possibilities are incineration and pyrolysis, or the composting of waste. “We are conducting a feasibility study now,” he adds.

Johannesburg has an impressive separation at source programme; households separate waste into bags which are then collected from their pavements. The pilot scheme was started in 2009, and soon was expanded to areas as far flung as Orange Farm in the south, and Dobsonville, Modderfontein, Greymont, and Diepsloot in the north, in all almost 400 000 households. Randburg and Roodepoort will come on board later this year, with Midrand in the far north bagging its recyclables in late 2015. This means that some 15 000 tons of recyclables were diverted from Joburg’s landfill sites in 2012/13. The goal is to push that to 20 000 tons in the future.

Those recyclables go to buy-back centres, where some 25 co-operatives and small, medium and micro enterprises (SMMEs) have been established, creating 500 jobs. The 10 buy-back centres are made up of small, informal recyclers. Most of the centres were set up by the city, which will be providing more in the future. At present, Joburg also has 42 garden refuse sites, 20 of which are operated by SMMEs. They also accept recyclable waste. The city plans to upgrade all its garden refuse sites to enable recycling.

“It should be stressed that the success of the programme depends solely on the citizens of Johannesburg changing their behaviour and appreciating waste as a resource,” says Musa Jack, Joburg’s executive director of waste minimisation strategy and programmes. She stresses that citizens must play their role as “anything to the contrary will be to the detriment of our environment”.