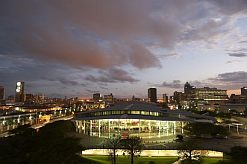 This is the first time in the ISI’s 122-year-old history that the gathering takes place on sub-Saharan African soil. The previous session took place in .

Host countries are informed of their success six years ahead of their event, and South Africa received the green light in August 2003.

The ISI is one of the world’s oldest scientific organisations. ISI sessions are held biennially and attract thousands of the world’s top statistical minds – typically the entire ISI membership.

About 10 000 delegates are expected to convene in Durban.

Africa is currently seeing a surge in statistics-related activity, and the conference will go a long way towards elevating statistics in to the global standard. It will also give the chance to participate more fully in an ISI session and beyond that, the international statistical community. This is something that has not happened often enough in the past.

“One of our challenges is ensuring the broadest participation of the African statistical community,” said ISI president Denise Lievesley, a social statistician by training. “Another is to provide space for intense deliberation on topics of relevance to the development discourse in .”

has been hard at work to encourage as many African countries as possible to participate fully in ISI 2009. This is the continent’s chance to show its statistical progress to the world in fields such as the implementation of the Millennium Development Goals, population censuses, and the development of statistical infrastructure which facilitates data-gathering to fight poverty.

“The 57th session of the ISI will set the pace and agenda for detailed debates and discussion,” said Lehohla. “It will also feature an exciting ‘Proudly South African’ social programme and opportunities to learn about life in this diverse country.”

Delegates will see how is using the opportunities for development presented by big international events, added Lehohla, especially with the 2010 Fifa World Cup less than a year away.

ISI 2009 offers a broad scientific programme. Topics such as Statistics in Africa, Biostatistics in Health – the Case of HIV/AIDS, the role of chance in evolution, and energy statistics are just a few of the topics to be discussed in a series of more than 100 invited paper meetings.

Some 25 short courses in statistical models and analysis are on offer during the session. They include courses on mentoring of young statisticians, professional ethics, internal and international migration, and training for teaching statistics in and .

A schedule of administrative meetings has been arranged for various branches within the ISI.

Set as it is in such a beautiful country, the session would not be complete without a leisure component. A number of social events have been planned with the goal of introducing delegates to ’s magnificent diversity of tradition and culture, as well as giving them a further chance to network.

These include the opening ceremony and reception, a beach party, a dinner for the ladies of the session, as well as the statistician-general’s VIP dinner at the Sibaya casino just north of , and the closing gala dinner.

For those who can’t get enough of ’s delights, several pre- and post-session tours are available. They include a birding safari to the Sani highlands in ; a safari in ’s world-famous ; a trip along the picturesque ; and a tour through the .

There are also a few full-day tours in and around , for those who wish to experience more of the country but don’t have the time to indulge in one of the extended tours. These include day trips to the nearby Drakensberg mountains; a tour of Shakaland, domain of one of Africa’s most feared kings; the Hluhluwe game reserve, known for its white rhinos; and the battlefields, a poignant reminder of the fierce war fought at the turn of the 20th century between Zulus, Afrikaners and British.

Finally, a number of half-day tours are also available, designed to give delegates a taste of the city of and the KwaMashu township.