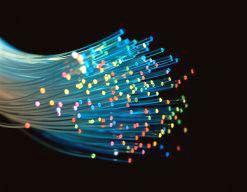 By the end of this year, all South African
universities and public research
institutions will have access to
internet broadband, at a speed
equivalent to that of more
developed nations.
(Image: www.cxo.eu.com)

RELATED ARTICLES
• SA universities to get fast broadband
• Learning through gaming
• Africa to get even more broadband
• Great astronomy, with or without SKA
• African eyes on the universe

By the end of this year, all South African universities and public research institutions will have access to internet broadband, at a speed equivalent to that of more developed nations.

South Africa’s Department of Higher Education and Training has announced that the Department of Science and Technology is to invest R886-million (US$117-million) into linking local universities and public research organisations, through a broadband connection with a minimum speed of 10 gigabits per second.

The development signals a new era in research and cooperation for South Africa. It places the country on a par with the rest of the developed world for the first time.

South Africa’s message to overseas scientists is clear. “Scientists will be able to come to the country, knowing that they can access the same quality ICT services as they are used to in their home countries,” says Christiaan Kuun, project manager for the South African National Research Network (SANReN)

The SANReN project, which is an initiative of the Department of Science and Technology, kicked off in 2007 to create an enabling information technology environment for students and researchers at tertiary institutions.

According to the Meraka Institute at the Council for Scientific and Industrial Research (CSIR), tertiary institutions in rural areas are the latest to benefit from the SANReN roll-out.

The Meraka Institute is in charge of implementation and oversight of the project. The institute focuses on advancement and research in information technology.

As part of phase two of the project, infrastructure development is being extended to smaller, rural universities and satellite campuses around the country.

The University of Venda and its satellite campuses in the North West province, Limpopo, and the Eastern Cape among others, will later this year connect to SANReN for the first time.

This will make it possible to access the internet at a minimum speed of one gigabit per second.

Phase one, which was completed late last year, made it possible for 105 tertiary and research councils, among them 23 educational institutions and eight science councils, to connect to SANReN.

The South African Large Telescope (Salt) and the Square Kilometre Array (SKA) connections were also finalised in the first phase, which now enables local and international scientists to process large quantities of data every day.

International connectivity is provided through the Seacom undersea cable and a joint collaboration with the Tertiary Education and Research Network of South Africa and international networks such as GÉANT, a pan-European research and education network.

Prof Hlengiwe Mkhize, deputy minister of higher education, says that the network forms part of the government’s desire to fast track research and education abilities through ICT at all tertiary institutions, with priority given to rural based institutions.

Mkhize represented the country at the Southern African ICT for Education Summit held at Victoria Falls in Zimbabwe on 26 and 27 January.

Government has made considerable investment in various projects and infrastructure, of which SANReN forms a part.

The government has also invested in submarine cable projects such as the West Africa Cable System (Wacs) and the Eastern Africa Submarine Cable System (EASSy).

Wacs is an under-construction submarine communications cable linking South Africa with the United Kingdom along the west coast of Africa.

EASSy is an undersea fibre optic cable system connecting countries of eastern Africa to the rest of the world.

According to Mkhize, EASSy will offer an additional eight terabits to the country.

The index assesses a county’s IT readiness in three areas: the regulatory, infrastructure and business environment for IT in the country; the readiness of business, government and individuals (three key groups identified) to use and benefit from IT; and actual ICT usage figures by these groups.

For the second consecutive year, Sweden and Singapore were placed first and second respectively. Overall, Nordic and Asian countries lead in the readiness ratings.

South Africa has both strengths and weaknesses in this regard. Its regulatory environment is excellent, but its individual readiness and uptake of ICT remains low.

The high cost of access to ICT in South Africa is another challenge. However, SANReN is addressing this problem.

This lies at the heart of the skills challenge in South Africa, admitted Mkhize.

About three-million young people in rural and semi-urban areas have the most pressing educational needs, she says.

While government’s investments will go a long way to improve the future of rural students, for ICT investments to be meaningful, a holistic approach is necessary, she added.

“Above everything, we have to use centres of higher learning as hubs of technology transfer.”