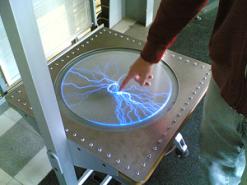 The theme of this year’s Insite exhibition
was the role of science and technology in
the developing world.
(Image: Sci-Bono Discovery Centre) 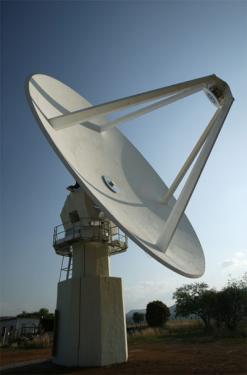 A scale model of the MeerKAT prototype
telescope was on view at Insite 2008.
(Image: Square Kilometre Array)

The International Science, Innovation and Technology Exhibition (Insite) 2008, an initiative of the national Department of Science and Technology (DST), is the Southern African region’s premier platform for developments on the science and technology front. The theme for this year’s event, the third edition, was the role of science, innovation and technology as key drivers of economic growth and development.

The event ran concurrently with the world conference of the International Association of Science Parks, held in an African country for the first time. The conference was hosted by South Africa’s first fully-accredited science park, the Innovation Hub, and carried the theme The role of Science and Technology Parks in accelerating knowledge economy growth – contrasts between emerging and more developed economies.

The international scientific body has announced that it plans to open an African chapter in the near future, as members from the continent continue to sign up in their numbers. Science parks are seen as significant contributors to building a culture of technology and entrepreneurship – an area that poses major challenges for many developing countries – because they stimulate and manage knowledge flow between universities, research institutions, and business.

However, while the establishment of science parks could assist emerging countries to become more competitive in the global knowledge market, the high cost of establishing these was often a deterrent, especially for young economies.

Addressing delegates at the conference, Gauteng Premier Mbhazima Shilowa praised government interventions, especially in the development of strategic economic infrastructure, for contributing to the growth of the Gauteng economy.

“The Innovation Hub was launched as part of these interventions in April 2005,” said Shilowa. “It is Africa’s first science park aimed at nurturing and growing enterprises in the knowledge sector of the economy.”

South Africa, and other developing African countries, hopes to participate more in the 21st century in terms of science and technology, said Deputy President Phumzile Mlambo-Ngquka, as this would ensure that economic growth had a beneficial impact on citizens.

In addition, Insite featured a strong focus on open source software, with a number of companies – including Microsoft – presenting their views on the way forward for the open source sector. The event also commemorated World Software Freedom Day, which was launched in 2004 with the aim of educating and boosting awareness among the global public of the benefits of using top-quality open source software, both at work and at home. Software Freedom Day fell on 20 September.

In South Africa, the DST has embraced the open source platform and is currently migrating software already in use to the open source equivalent. The department will also only install new applications that are based on open standards. This is in line with national government’s grand policy to implement open source solutions, which was approved by Cabinet in early 2007.

“We promote open source not only because we want to use high quality software and the latest technology,” said science and technology director-general Phil Mjwara, “but because it is an excellent platform for scientific computing. It gives scientists access to the tools they require to perform their work no matter what area they decide to specialise in. Therefore you will find open source software in our bio-chemistry projects our astronomy projects, and our HLT and access programmes.”

The DST’s National Advisory Council on Innovation runs entirely on open source software, using Kubuntu Linux as the operating system as well as OpenOffice and Firefox for productivity. The DST also runs open source software on its web servers, firewalls, PABX, proxies, mail relays and network tools, among others.

Speaking in July 2008 at the opening of the GovTech 2008 conference in Durban, Minister of Public Service and Administration Geraldine Fraser-Moleketi named open source software and open standards as key components of efficient IT in government. Moloketi is known for her support of the open source platform and said that government IT providers must not dismiss open standards.

Sport and biofuels also a focus

Another focus area at Insite was the role that technology plays in sport, with the Science and Technology in Sport conference also taking place during Insite. Here, the role of sport and recreation in demystifying science and technology amongst youth was examined. The conference also spotlighted the 2010 Fifa World Cup, and opportunities for the national development of sport participation in previously disadvantaged communities.

Topics of discussion included a strategy on uniting African broadcasters for 2010, and the creation of home-grown models for producing winning sports stars. Respected sports scientist Tim Noakes and former Springbok coach Jake White, who guided the national rugby team to their second world championship in 2007, were guest speakers.

The Bio2Biz SA 2008 conference, highlighting the resurgence of biofuels, tackled the need for alternative sources of fuel versus the need to judiciously use the earth’s cultivatable land. South Africa, as a developing country, could benefit from the positive spin-offs derived from biofuel production, such as job creation, economic upliftment of rural communities, and a closer relationship between the first and second economies. The country’s draft biofuels legislation is, however, sensitive to the issue of food security as it advises against the use of essential food crops and productive land to make biofuel.

A variety of exhibitors

Exhibitors at the event included, among many others, Breadbin, marketers of the Freedom Toaster, Microsoft, Carl Zeiss, Robotics SA, the Sci-Bono Discovery Centre, the Cradle of Humankind world heritage site, the office of science and technology in the New Partnership for Africa’s Development, and the Council for Geoscience. A model of the MeerKAT prototype telescope was also on display – this is part of the Karoo Array Telescope, which will be used in the core of the Square Kilometre Array telescope should South Africa win its bid to host the giant apparatus.

The One Laptop Per Child project showed off the latest release of their low-cost laptop and demonstrated the machine’s capabilities.

A German pavilion featured the latest and best from this technology-savvy nation. A number of higher learning and research institutions were present, including the Universities of Stuttgart, Duisberg Essen, and Braunschweig/Wolfenbüttel, and the German Development Institute Bonn.

Visitors to Insite were also treated to the Madrid pavilion, which hosted the Madrid Chamber of Commerce, PromoMadrid Desarrollo Internacional de Madrid SA, and the Madrid Region Parks and Clusters Network, a network of six science parks located in the region.