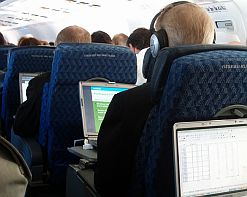 South Africans flying between Cape Town
and Johannesburg will be able to access
wireless internet from April 2011.
(Image: Wired)

WirelessG, a local internet company, will soon begin installing wireless internet on South African domestic passenger planes to enable frequent fliers to keep up with their deadlines and the fast-paced world around them.

Passengers flying between Cape Town and Johannesburg will be able to access wireless internet through a service called Fli G-Connect from April 2011.

Sechaba Mokoena, a DJ from Johannesburg, said he was looking forward to the service. “It’s about time we got wi-fi access on our country’s local planes. I am never on the ground – I travel to Cape Town and Durban a lot for work, so I’m happy I’ll be able to keep up with the social scene while I fly. As a DJ, I need to keep up with what’s happening at all times.”

Businessman Ronald de Necker, also from Johannesburg, agrees. He often has to attend meetings in Cape Town and flies there weekly. “This is brilliant. We live in a fast-paced world and we need to have this kind of fast-paced, easily accessible internet on our planes to keep up with deadlines while travelling and not miss out on any economic news or events taking place at any given time around the world.”

South African technology research company World Wide Worx said effective internet connectivity is vital for the country’s economy. “We are in a competitive age during which access to information and ease of communication enhances productivity,” said company head Arthur Goldstuck.

World Wide Worx estimates that South Africa had 6-million internet users by the end of 2010, and that this will climb to 10-million by 2015.

WirelessG CEO Carel van der Merwe said local airline Mango would be the first to have the technology installed in its planes, but noted that his company is currently in talks with other airlines as well to roll out the service to as many operators as possible.

To access wi-fi while on a flight, South African passengers will need to open a G-Connect account through the WirelessG website – this does not cost anything. Once signed up, users need to buy a WirelessG voucher to secure time online. The concept is much like buying airtime for a prepaid mobile phone.

Van der Merwe said passengers will soon be able to get onto a plane, switch on their laptop, smartphone or tablet, enable their wi-fi, and then pick up a signal. “You then put in your G-Connect account credentials, or you purchase a voucher, and Bob’s your uncle, you are on the internet.”

“Wireless internet on planes will allow me the chance to do my banking, emailing, and pay bills during the two-hour flights to Johannesburg I have to take every month,” said Catherine Sithole, a public relations executive from Cape Town. “I’m always so busy and prefer everything to be quick and easy – wireless internet is just what I need.”

A study conducted by research consultancy Wakefield Research and the Wi-Fi Alliance shows that the availability of wi-fi has become a key factor for many Americans when deciding which airline to fly. According to the findings, 76% of frequent fliers in the US would change their airline to have in-flight wi-fi.

Wakefield Research and the alliance predict that airlines which do not offer in-flight wi-fi as part of their service could face a serious decline in customers and ultimately a loss of revenue in the future.