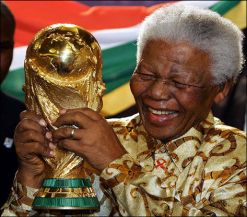 Former president Nelson Mandela, wearing
one of his trademark shirts, holds aloft the
Fifa World Cup at the announcement that
the tournament would take place in South
Africa in 2010.
(Image: 2010 Fifa World Cup South Africa) 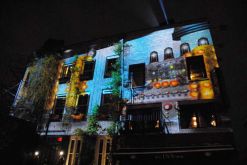 Images of the artists’ designs were
projected onto buildings in Manhattan’s
Meatpacking District on the launch night.
(Image: Obscura Digital)

The Madiba shirt, a loose-fitting casual garment named for its most famous model, has become something of a fashion icon in South Africa and abroad. Desré Buirski is one of the designers responsible for the trend, having designed unique hand-painted silk shirts for former president Nelson Mandela since 1995. Now she has transferred her talents to the internet as one of more than 60 artists from around the world who were invited to design a theme for iGoogle.

iGoogle is the personalised home page for users with a Google account. Users can customise it as they wish, adding weather, news, sport, recipes, calendars, horoscopes, reminders and other useful (or possibly not) applications to the page.

Now iGoogle pages can be further decorated by adding an artist theme – Buirski’s design features rich earthy colours and a stylised map of Africa on several mastheads. The outline of Africa is appropriately filled in with a silk-like fabric design, and the masthead changes throughout the day with different parts of Africa showing up on the iGoogle page.

All have contributed unique and innovative themes to the project, allowing users to appreciate their artistry every time they go online. Marissa Mayer, a vice president at Google and the company’s first female engineer, said, “Google has become the doorway to the internet for a lot of people, so we want to make it feel more like an online living room.”

Google launched its offering of personalised themes on 1 May 2008 in one of New York’s most fashionable neighbourhoods, the Meatpacking District located in Manhattan. Over the next three days Google promoted its new artistic venture with a large-scale open-air art show that involved projecting animated images onto the facades of buildings, including hotels and restaurants, in the district. The internet search company also provided a lounge with computer stations where visitors could try out the themes for themselves.

Buirski, as one of the featured artists, was present at the launch and saw her African-inspired design projected across the Manhattan skyline in view of thousands of people. She was overwhelmed by the experience, saying, “First creating a design and then seeing it projected across the skyline of a city like New York is quite mind-blowing.”

Besides the customised artist themes, there are many other themes available ranging from interesting while not necessarily practical, such as the theme which tracks sunlight as it moves across the face of the earth, to frivolous. Users also have the option of designing their own themes but some programming knowledge is required.

Google has a localised South African site that allows internet users to search the whole web or restrict their search to local websites. SA country manager and IT authority, Stafford Masie, commented on Google’s commitment to making South African users’ internet experience, in terms of content as well as customisability, as interesting as that of any other user worldwide. He added that the local Google team was proud to have played an active role in the launch.

“iGoogle allows Google users to choose the content that they’re interested in seeing. It’s an easy way to make the world’s information useful and accessible, straight from a landing page,” said Masie. “And users in South Africa and across the world can now give their Google homepage a truly South African touch.”

This is not the first time that Google and South African innovation have come together. South African organisation Translate.org.za, which translates and localises open source software into South Africa’s 11 official languages, has had two of its products – Translate Toolkit and Pootle – included in the 2008 Google Summer of Code project. This is a collaborative programme that brings together students and mentors from 90 countries around the world to work during the US summer holidays on free open source software products, enhancing and modifying them.

Nelson Mandela gave new meaning to the word “casual” when he adopted the loose-fitting silk shirt as his personal symbol of style and wore it to even the most formal of events, in the presence of the world’s leaders, and to official functions. The Madiba tag is Mandela’s Xhosa clan name and is an honorary title adopted by elders of his clan.

Buirski, who lived in the US for many years, was in Cape Town in February 1990. This was when Mandela stepped out of the gates of Victor Verster Prison in Paarl, Western Cape, as a free man after serving a 27-year prison term. She was inspired to create the free-flowing garment by the future president’s fresh and open approach to dialogue as he embraced the concept of the Rainbow Nation. She also resolved to return home to South Africa.

Buirski created her first shirt in 1994 and managed to present it to one of Mandela’s bodyguards, who passed it on to the president. He wore it to the dress rehearsal of the opening of South Africa’s first democratic Parliament, thus setting a colourful fashion trend that has become instantly recognisable.

Over the years Buirski has made more than 120 shirts for Mandela. The former president is widely admired – and sometimes criticised – for setting his own fashion rules, wearing what he feels comfortable in, and finding the stylish middle ground between Western formal wear and traditional African clothing. The revered statesman turns 90 in June 2008.