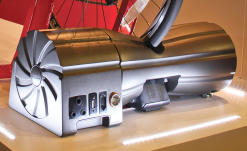 Various energy outlets are built into the device. 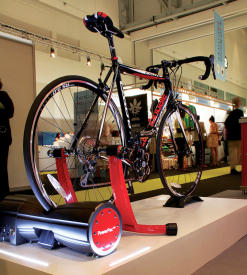 The PowerPac attached to the cycle’s rear wheel and ready to go. 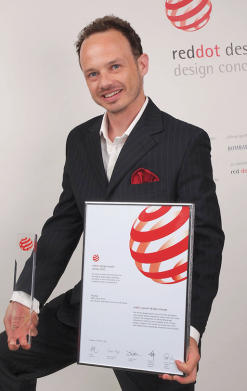 Senior designer Jared Vorster was on hand to accept the accolade at the glittering awards ceremony in Singapore.
(Images: Ideso)

Cape-based company Ideso’s PowerPac has received one of the highest accolades in the design world – the Red Dot ‘Best of the Best’ award for 2012. This is no mean feat, as the awards were contested by 4 515 entries from around 1 800 companies and designers from 58 countries.

Ideso is a specialist product design consultancy that, since 1998, has focused on the distribution of creative and interactive products and has brought over 400 products to market for local and global companies such as Shell, Addis, British American Tobacco, and ZaPOP – this achievement led to the company’s recognition by the Singapore-based Red Dot awards.

Established in 1955, the awards highlight the importance of design for the advancement of business and society. The sought-after red dot of approval is internationally recognised as a sign of top-quality design and as well as the prestige that comes with earning one, the winners are also presented in the Red Dot yearbooks and exhibitions.

How the PowerPac works

The PowerPac is simply attached to the back wheel of a bicycle and 80 minutes of cycling – by an average cyclist – will result in a full charge and 132Wh of stored potential energy. This human generated energy can later be used to power numerous devices such as phones, cameras and household tools, among others.

However, the company has no plans yet to make the PowerPac available outside urban centres.

“The technology is aimed at home or office cyclists,” says Ideso senior designer Jared Vorster. “The technology required, along with the production and component costs, mean that this product would be unaffordable for the rural market.”

The price of the PowerPac, were it to go public, would be around R6 000 (US$668) depending on the demand for the product. Vorster hasn’t ruled out the possibility of a low-cost version, but says this is not part of Ideso’s plans as yet.

While human-generated energy and home fitness training are not new concepts, Ideso goes even further by integrating the concept of a removable storage unit with the means for portable charging wherever and whenever it needs to be utilised.

“Our concept is not meant to be a cheaper alternative for electricity,” says Vorster, “but is rather aimed at making existing exercise more meaningful, thus allowing those who currently work out at home or at the office, to put their effort to good use.”

The PowerPac consists of two parts: the removable smaller battery unit which contains the 12V battery and various built-in energy output options such as a conventional 220V AC outlet, a 12V DC cigarette lighter type, and a 5V DC USB port, while the second larger unit houses the permanent magnet DC generator and the charge controller.

Designing for a better South Africa

The local industrial design industry is small, but according to Ideso MD Marc Ruwiel the size does not undermine the quality of work produced by the South African design community.

Students interested in a career in industrial design careers can enroll at tertiary institutions such as the Cape Peninsula University of Technology as well as at the University of Johannesburg.

Ideso promotes the idea of industrial design as a source of economic growth with the use of innovative ambition. Many South African households may own Ideso products and yet have no idea of the company’s existence, but the Red Dot’s stamp of approval has created international interest in the product and has increased Ideso’s visibility within the design world.

Ruwiel hopes that this visibility will make the international community aware that “there is more to South Africa than game drives and politics”.

PowerPac’s success has arrived at an optimum time as Cape Town prepares to host the World Design Capital in 2014. The company hopes to bring PowerPac into mass production and is currently looking to partner with an existing brand within the cycling industry to use their distribution channels.

Among Ideso’s local portfolio are the Addis ComfiGrip range of household cleaning products; a 45l cooler box also for Addis, as well as numerous other plastic storage items for the company; and an in-store drop box for Berco couriers.