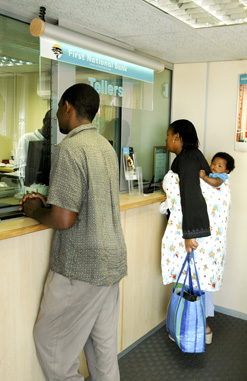 Customers at a bank in Soweto. Identity
documents are essential for a range of
transactions in South Africa, such as
opening a bank account, taking out a
mobile phone contract and applying for a
job.
(Image: MediaClubSouthAfrica.com)

The one document no South African can do without, the identity document or ID, is about to get smart, with the Department of Home Affairs planning to begin a pilot project to replace the ID with a smart card system in early 2012.

Roll-out of the new system has still has to be determined, being subject to the necessary infrastructure first being in place, Minister of Home Affairs Nkosazana Dlamini-Zuma indicated in a recent parliamentary session.

“Planning is in progress to ensure that infrastructure in front offices, such as live capture, is completed prior to smart card implementation,” she said. “The system is envisaged to be piloted during the 2012/13 financial year.”

The smart card will replace the current green bar-coded ID book, itself only introduced in November 2010. It will cost the department R140 (US$18) to produce, including all manufacturing, administration and distribution costs. The new ID has a number of additional security features including a digitally printed photograph and personal details, as well as embedded security features.

“These improvements form part of ongoing efforts by the government to enhance the security of enabling documentation such as IDs, birth certificates and passports in the fight against ID theft and fraud,” the department said.

All South Africans 16 years and older must have an identity document. Permanent residents and naturalised citizens from other countries may also apply for an ID. The application process is simple and requires only a birth certificate and two ID-size photographs. The first issue of the document is free but costs R15 to replace if lost or stolen. The department has set up a toll free number, 0800 60 11 90, to help with applications.

IDs are essential for a range of day-to-day transactions in South Africa, such as accessing government services, applying for a job, opening a bank account, taking out a mobile phone contract and registering at university. No ID also means no vote, no driver’s licence and definitely no passport.

The current South African passport will remain unchanged for now as it already has some of the most up-to-date and necessary security features required for travel.

In 2009 the department upgraded the passport with new security features after it was found to be easily forged. The document, which costs R400 to produce, now has laser-engraved data on the personal information page instead of printed information and a watermark. It is also printed on polycarbonate paper, making it difficult to forge.

“Should the department, at a later stage, find a need to upgrade any current security features, this will be done in consultation with all relevant stakeholders,” Dlamini-Zuma said.

In 2009 the UK High Commission introduced a visitor visa requirement for all South Africans who did not have a previous UK stamp in their passports, after a high number of fraudulent passports were found on people attempting to enter the country from South Africa. The visa requirement remains in place despite the Department of Home Affairs’ efforts to make the South African passport more secure.