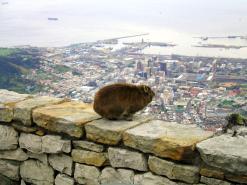 A hyrax perches on a wall on the top
of Table Mountain.
(Image: Flickr)

The rock hyrax was the subject of a
scientific study, which uncovered the
animal’s complex communication skills.
(Image: Flickr)

They scamper over the rocks of Table Mountain, and are a familiar sight to visitors as they bask in the sun and calmly pose for photos.

Nature lovers will also see mongooses, porcupines, baboons, frogs, snakes, tortoises, antelope, numerous bird species, and occasionally a caracal, making their way along the mountain, but it is the endearing little hyrax, indigenous to sub-Saharan Africa, that has become a favourite with visitors.

Related to elephants, dugongs and manatees, they are sociable mammals that live in groups of up to 80 individuals, with distinct families in each colony.

Known as noisy creatures, adult hyraxes are able to make at least 21 different sounds. They wail, squeak and tweet, at times sounding like birds, for various reasons, such as warning of danger – during foraging sessions there are always one or two animals on the lookout for predators while the others eat.

These calls are known as songs and they help in determining biological information such as age, size and social status, through factors such as frequency, length and complexity.

Now scientists have found that the Cape hyrax has a complex communication structure that is made up of syllables, a characteristic that could attract even more visitor attention to the guinea pig-like mammals.

The latest research on the animals suggests that their songs are not without pattern, but that they are made in an organised fashion.

The study group, led by zoologist Arik Kershenbaum from Israel’s University of Haifa, studied the mammals and found that the order of the notes are significant, an indicator that their songs have syntax, or a specific arrangement.

In a research paper titled Syntactic structure and geographical dialects in the songs of male rock hyraxes, published online in the April edition of the Proceedings of the Royal Society B, Kershenbaum and his colleagues described their findings, made on hyraxes living in Israel’s rocky landscapes.

“Male hyraxes produce long, complex songs, lasting up to several minutes, which carry accurate information on the characteristics and identity of the caller,” wrote Kershenbaum. “A hyrax song typically consists of a series of bouts, each bout being a sequence of syllables followed by a short pause.”

The syllables made by the hyrax are grouped into five categories, he explained – they are ‘wail’, ‘chuck’, ‘snort’, ‘squeak’ and ‘tweet’, and each bout contains up to 30 syllables.

“And out of these, you can make up a whole language and combine them in an infinite number of ways.”

Their songs can last several minutes, with each bout lasting 10 – 20 seconds.

Previously, syntax in mammal vocalisation had been studied only in primates, cetaceans and bats. But the new findings suggest that the hyrax can take its rightful place in this small and varied group of complex communicators.

What’s more, the research group discovered that hyraxes from different regions have a different dialect. When compared, it was found that colonies that lived near to each other had similar structure in their songs, while those living further away were notably different. This suggests that nearby colonies copy each other.

It is also thought that male hyraxes use their songs to attract female mates, as the older and higher-ranked animals sing more frequently. Young males copy the dominant male by trying to sing like him, another reason for the similarity found in groups. 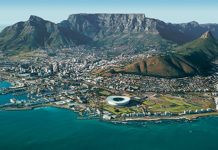 ‘Game-changers’ for the Western Cape: 2015 State of the Province Address 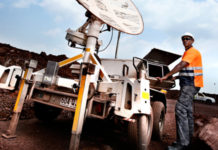 A skilled and capable workforce to support an inclusive growth path 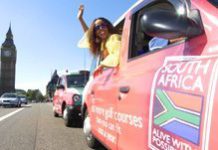