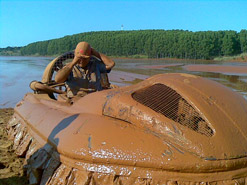 Gary Gribben relaxes after a long, muddy
battle to retrieve the stuck imported
hovercraft from the slurry dam at Exxara
Mine in northern KwaZulu-Natal. 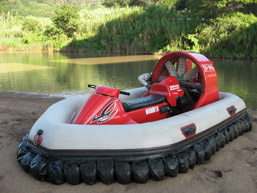 The “impossible” inflatable hovercraft
seen here on the banks of the Umkomaas
River. 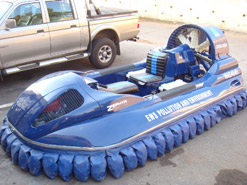 The first time South African inventor Gary Gribben saw a hovercraft was when he crossed the English Channel on one during his honeymoon.

“I’m going to build one of those,” he told his new wife and, more than 20 years later, he did.

A hovercraft is a remarkable thing. It’s neither boat nor plane, but a bit of both. Hovercrafts float on a cushion of air, so they do fly, albeit very low, and that’s the secret. It’s what gives them their smooth ride, and their ability to travel over any terrain or surface. Hovercrafts can traverse mud, deep water, sand, tar and even thin ice, moving from one surface to the other at top speed without a shadow of a bump.

How it works is simple. There are two types of hovercraft – single-engined and double-engined. The latter  is by far the easiest to drive. One engine powers a fan that diverts air under the craft, where it is held in place by a flexible skirt. The second powers a rear-mounted fan, or propeller, that moves the craft forward. A single-engined hovercraft works in the same way, except one engine powers both fans.

While the engines aren’t particularly noisy, the fans are – and that is the only environmental disadvantage of hovercrafts. They’re not exactly quiet.

But other than noise, hovercraft are very environment-friendly. Unlike motor boats they don’t create a wake, which erodes river banks. They don’t have a propeller in the water that can injure and kill marine life, and they don’t pump fuel or fumes into the water like an outboard engine. And, unlike four wheel drives, they travel lightly indeed over the ground. You can drive a fully laden hovercraft over a dozen eggs and they will not be damaged.

In fact, the hovercraft has less impact on, for example a beach, than a barefoot stroller. If you look carefully, you can see a faint trail of swept sand where the hovercraft has travelled. And, of course, hovercrafts do not get stuck in mud or soft sand.

This makes them perfect for many South African rivers, which are often quite shallow and not considered navigable. They can also be safely used on wetlands, as they have no impact on the water, the vegetation, the animals and the birds.

They do have some disadvantages. They are tricky to drive, and it takes a while to learn to steer them. But once you’ve got the hang of it, you’ve got it.

Making the dream a reality

As any good business consultant will tell you, it’s all very well having a fabulous product, but if you don’t have a market, you don’t really have a business. So Gribben decided to build a little single-seater inflatable hovercraft that could be hired out on beaches for joy rides. It seemed like a fun idea.

His thinking was eminently logical. Hovercrafts are notoriously difficult to steer, so the inflatable hull was insurance against serious injury or damage if they collided. It seemed sensible to get some advice from established manufacturers, so he contacted a couple of factories overseas.

“They were very friendly and helpful,” he says, “but they all told me it was impossible to build an inflatable hovercraft.”

That worked like a red rag to a bull, so nine months later he’d built two rubber ducky hovercrafts with small industrial Briggs & Stratton motors. They were cute and fun, and had a top speed of 30 kilometres and hour. But everyone who tried them out said they wanted something bigger that could take two people, and travel a bit faster.

So it was back to the drawing board, and – contrary to all predictions from the experts – he produced an inflatable hovercraft capable of carrying about 200 kilograms, and easily reaching speeds of around 50 kilometres an hour. He replaced the glorified lawnmower engine with an imported Rotax motor, which is the same as those used in microlights.

Once he’d got the inflatable craft off the ground, as it were, he designed a bigger double-engined craft – this time with a rigid hull. The main advantage of this model is that the double-engined design is easier to drive.

With these two models, Gribben thought he’d target the angling market, especially as the ban on four wheel drives on beaches had impacted quite seriously on the recreational fishing fraternity.

“It was a good idea, but it got totally tangled up in red tape,” he says. “So I’ve put that idea on the back burner.”

Then he thought they might make a great bird-watching platform. That sounds weird, because hovercraft are noisy, but I have driven one of these on a river and found that I could get closer to birds than I can in a kayak.

“That’s because it doesn’t create a wake,” Gribben explains.

“Wouldn’t it be great,” he asks, “to have five or six of these heading upstream to watch birds – and maybe game? Take a picnic and generally make a day of it.”

But the market for recreational hovercraft is small, particularly as the local authorities are not geared up to registering them. They’re not wheeled vehicles, they’re not boats and they’re not aeroplanes, which confuses matters.

While Gribben realised that lots of people would love to have a hovercraft as a fun plaything or a fishing platform, the problems with registration basically cuts that market out. But he has sold a few. A team building company has bought four, a Namibian bought one to play around on sand dunes, and two were sold to Durban locals who thought they were the coolest things in the world, and just had to have them.

One was sold to the owner of a private game reserve, who uses it to inspect places he can’t get to otherwise – particularly his seven kilometres of shallow river with its numerous sandbanks.

But that’s not nearly enough to sustain a business. So Gribben went more industrial. In 2008, Durban municipality’s Ethekweni Water Supply bought a twin-engined craft, which they use to trace water pollution and test water quality.

“It’s the perfect craft for the job,” says Gribben. “It can go up and down the canals at any tide, and even into the rivers over very small rapids. It’s far more versatile than either a boat or a four by four, or even a combination of the two.”

Also in 2008, Gribben got a call from Exxaro Mines near Richards Bay. They’d bought an imported single-engined hovercraft to survey their slurry dams. The hovercraft got stuck, so Gribben went out to rescue it.

Then the mine management asked him to do the surveys, which he does, travelling up there from Durban every couple of months.  He’s tried really hard to convince them they should rather buy a new hovercraft from him, but they seem happy to outsource the job.

So fun as they are to build and drive, and despite their proven utility in a range applications, hovercrafts seem as difficult to sell as they are to steer.