The Homo naledi fossils have been carefully placed in the highly secure Phillip V Tobias Fossil Primate and Hominid Laboratory, which houses most of the world’s information on human evolution. We take you on an exclusive tour. 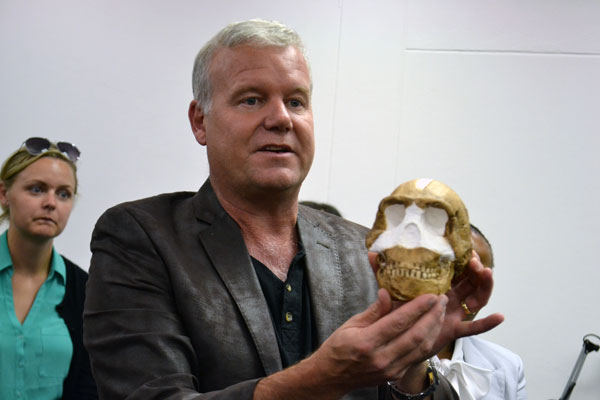 Homo naledi fossils has been relocated to the Phillip V. Tobias Fossil Primate and Hominid Laboratory where further tests will be done. (Images: Shamin Chibba) The gallery

• Local researchers honoured at their ‘Oscars’
• Space science can solve socio-economic problems
• Hanli Prinsloo: ‘Fall in love with the ocean, to save it’
• New push for careers in science and innovation
• DNA detective work could end poaching

The Homo naledi fossils, which were recently discovered in the Dinaledi Cave in Gauteng, have been given a new home at the University of the Witwatersrand in Johannesburg.

The fossils are now housed in the vault at the Phillip V Tobias Fossil Primate and Hominid Laboratory on campus, after spending a month on display at the Cradle of Humankind in neighbouring Mogale City.

The new species, Homo naledi, was named after the chamber in which it was discovered, in the Rising Star caves. The underground room where the fossils were found was called the Dinaledi Chamber, which means “chamber of stars” in SeSotho.

At a recent Forum on China-Africa Co-operation (FOCAC) media tour hosted by Brand South Africa, local and foreign journalists were given exclusive access to the vault.

Archaeologist Lee Berger, an American based at Wits’ world-renowned centre, said the vault was home to almost 60% of the world’s fossils, including the recently discovered Homo naledi. Berger and his team of excavators were on hand to show and explain their experiences during their discovery of the Homo naledi fossils.

At its opening in July, Berger said the vault held more scientific information on how humans evolved and where we came from than any other facility worldwide. “Right here in this vault, this word-class vault, is the majority of their assemblage. It’s held in high security because this is all of human heritage.”

“This is a very special place,” he told the journalists on the FOCAC tour earlier this month. “We don’t allow anyone other than scientists to enter here.”

But the press members were given a chance to view the Homo naledi remains up close.

And now, we present to you exclusive pictures from the vault taken during that media tour. 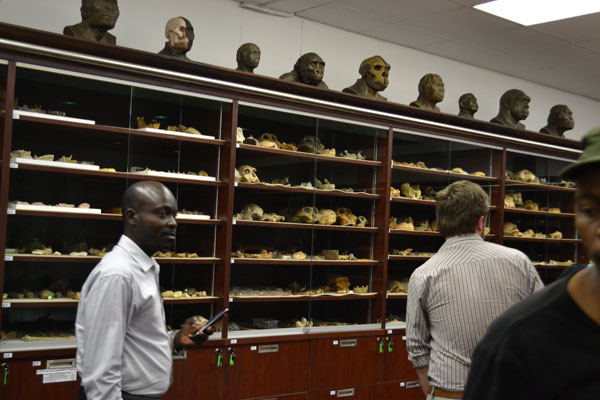 Pictured is the inside of the vault at Wits University. Berger said there was an “extraordinary spike in discoveries across Africa over the last decade” and that there is still more to find on the continent. 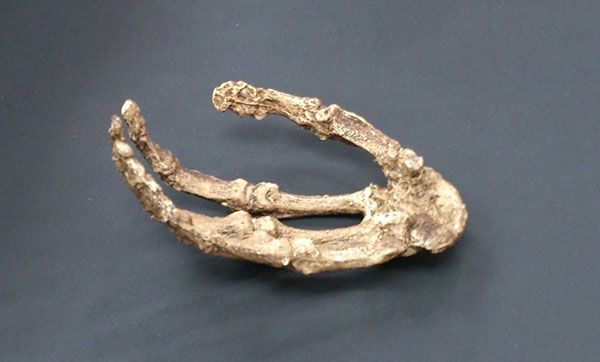 Berger believes that this young woman’s curved hand could have been shaped that way for climbing. 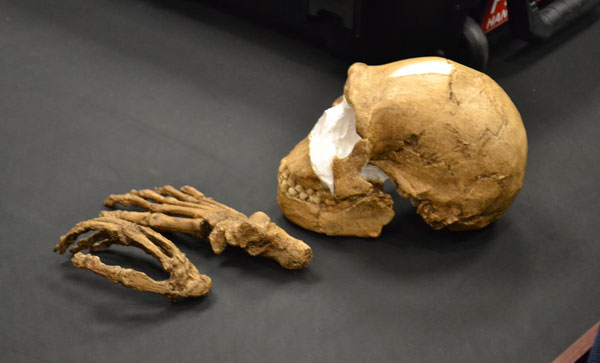 What startled Berger and his colleagues is that the Dinaledi Cave where the homo naledi fossils were found was just 1.5-kilometres away from Sterkfontein, a site that is rich in hominid fossils. 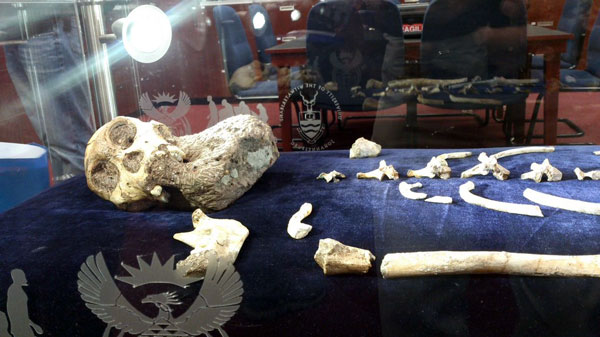 Homo naledi had the ability to move its arms and legs like modern humans. 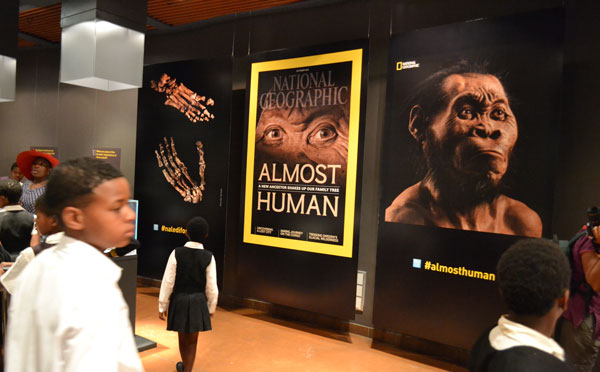 The homo naledi fossils were on display at the Cradle of Humankind between September and October this year. 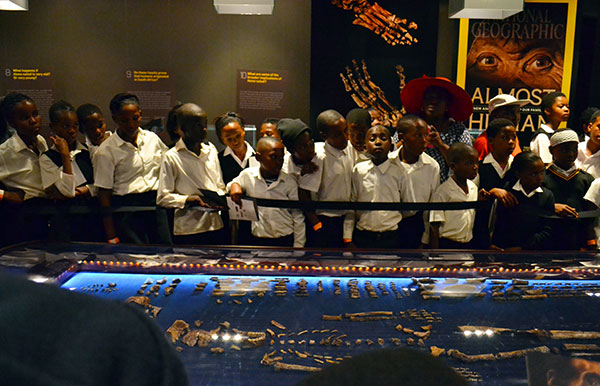 Schoolchildren were given the chance to view the remains of the homo naledi when it was kept at the Cradle of Humankind earlier this year. 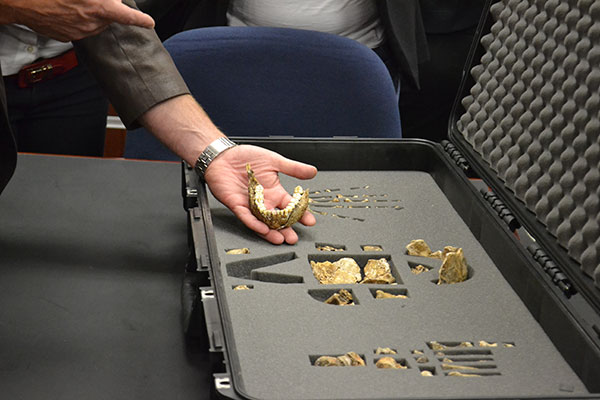 The bones showed no traces of their being in fights with carnivores or other hominins. This suggests that the Dinaledi Cave was where the homo naledi disposed of their dead, a sort of burial site. This is an indication of their sophistication and what Berger said was a recognition of their own mortality. “It is what separated us from the animal kingdom.” 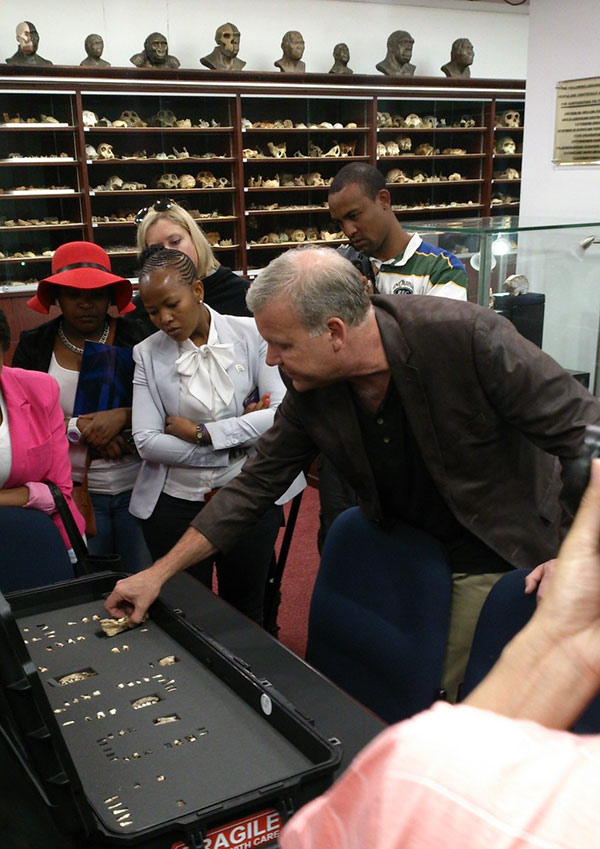 Berger said fossils of 15 individuals of various ages were found 12 metres into the Dinaledi Chamber. 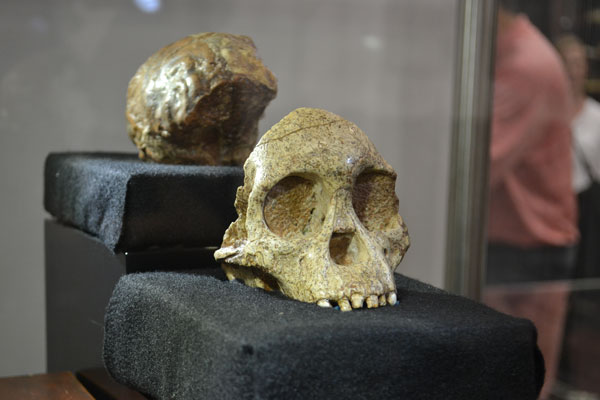 Taung Child, pictured above, which is a fossilised skull of a young Australopithecus africanus, is also housed in the vault at Wits University. It was discovered in 1924 by quarrymen working for the Northern Lime Company in Taung, North-West province. 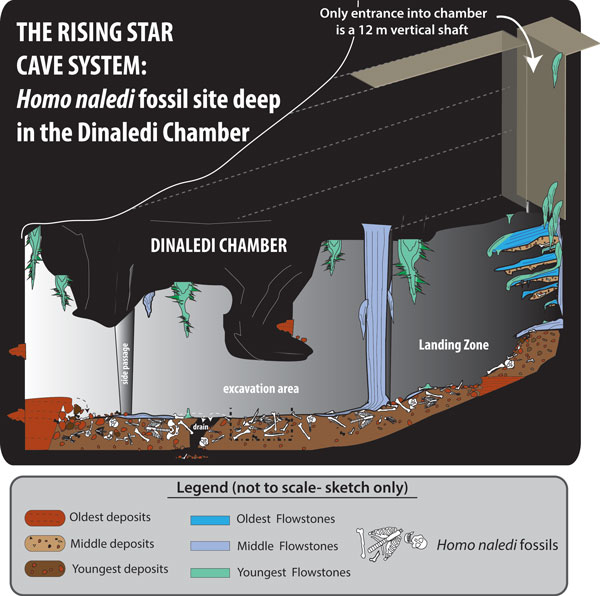 An illustrated representation of the Dinaledi Cave where the homo naledi fossils were found. (Image: Wits University)