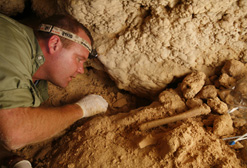 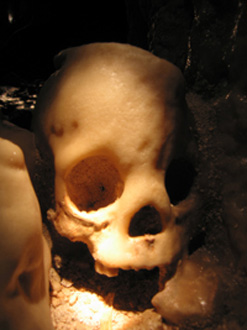 One of the tiny Palau skulls, embedded in
flowstone.
(Image courtesy the University of the
Witwatersrand) 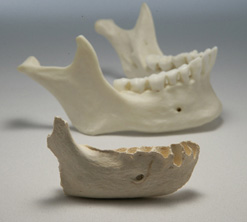 A comparison of a 2 900-year-old lower
jaw (front) discovered in Palau in 2006
with a modern human female jaw shows
the dramatic difference in size between
the small-bodied early Palauans and
average-sized modern humans.
(Image courtesy Stephen Alvarez,
National Geographic)

An international team of scientists led by South African researchers from the University of the Witwatersrand (Wits), Johannesburg, have announced the discovery of an extinct population of small-bodied humans found on the island of Palau, Micronesia, an island in the Pacific Ocean.

The study, announced on Tuesday 11 March and funded by the National Geographic Society, is published in the latest edition of the journal PLoS ONE.

The fossil humans, which lived on the island between 1 400 and 3 000 years ago, have some, but not all, of the features found in the controversial Homo floresiensis “hobbit” fossils found on the island of Flores in Indonesia.

The small-bodied H floresiensis finds have been the subject of fierce scientific controversy, with debate as to whether the tiny skeletal remains represent a new species of human or are simply the remains of a pathological individual with some type of genetic disorder such as microcephaly.

The research team was led by Professor Lee Berger, a Wits palaeoanthropologist, with colleagues from Duke University and Rutgers University.

“The Palauen fossils exhibit a surprising number of traits that were originally used to describe the hobbit as a unique species including, small body size, relatively large teeth, small faces and reduced chins,” says Berger, who discovered the fossils while vacationing in Palau in 2006.

The fossils come from two caves in the picturesque Rock Islands of Palau, in the Pacific Ocean.

“We were on a kayak excursion when a guide asked me if I wanted to see a cave with some old bones in it,” says Berger. “When I saw a tiny face, part of a fossil skull, I instinctively knew that they were of major importance. I initially thought it was one individual and of course the ‘Flores’ debate was raging at the time. I used my camera to focus on the tiny bones and snapped some shots so that I could study them in detail at a later stage.”

After obtaining an emergency grant from the National Geographic’s Mission Programmes, Berger and a team of international scientists, including Wits students, returned to Palau a few weeks later. “What we found astounded our most experienced explorers, even the Palauen officials who accompanied us.”

Bonita De Klerk, a PhD student at Wits, was one of the initial explorers and co-authors of the paper. “The cave where Berger had found the original fossils was literally filled with tens of individuals,” she says. “When excavated, the sand itself was practically made up of ground human bone. In a one metre-square by 50-centimetre-deep test pit, we recovered more than 1 200 fragments of human beings.”

Studying the Palau fossils, De Klerk found individuals that were practically the same height as Flores. “They were as small as just over a metre,” she says. “One foot bone is actually almost the same size as the same foot bone of the famous Little Foot skeleton in Sterkfontein, and that’s very small.” Little Foot, an australopithecine early human ancestor dated to around 2.5-million years ago, is one of the many hominid specimens discovered in South Africa’s Cradle of Humankind world heritage site.

The brains of the Palau humans were probably extremely small, at the very bottom or even below modern human variation. “However, they are not as small as the brains of the hobbits,” says De Klerk. “We have found some skulls but they are heavily embedded in flowstones and we cannot measure their brain size, only estimate it.”

A second cave has revealed an equally large cache of bones, suggesting that the islands might be full of surprises. “Who knows what is out there?” Berger says. “It just demonstrates the great need for more exploration to be undertaken in these remote areas.”

A fascinating aspect of the find is how quickly the island adaptations may have occurred. “Our fossils are among the oldest ever found on Palau and may indicate that all of these features evolved very quickly, possibly in just a few generations,” Berger says.

“Palau is like a Galapagos for humans. There were at the time no large terrestrial animals so it is likely that the early Palauens had to survive on only near shore marine resources. While this island looks like Paradise these early people, who may have been stranded, were really living under a great deal of dietary stress.”

The announcement of the Palau finds came only a week after the legitimacy of Flores as a unique species was again questioned. Australian researchers presented evidence that the unusual limb structure of H floresiensis, seen as crucial evidence of its unique status as a species, is remarkably similar to the limbs of people with a genetic disorders such as cretinism, which can also affect the structure of the skull.

“When you put our two studies together it does make one wonder,” says Berger. “With their big teeth, small faces, reduced chins and small stature, it makes me wonder what a cretin or microcephalic would look like in the Palauen sample. Maybe not identical to, but perhaps a lot like the hobbit skeleton?”

Berger and his colleagues intend to continue work on Palau and neighbouring islands as part of an international expedition to discover more fossils.