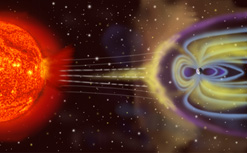 An artist’s impression of the sun and the
earth, showing how the magnetosphere
deflects the solar wind, thus protecting the
earth’s atmosphere from excessive
radiation.
(Image: Nasa) 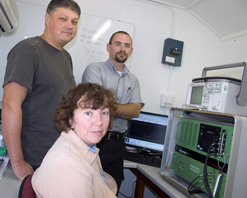 The new Digisonde DPS-4D with the
installation team of Lee-Anne McKinnell of
the Hermanus Magnetic Observatory
(seated), and, from left, Grigori Khmyrov
and Ryan Hamel of the Digisonde
development team at the University of
Massachusetts Lowell Centre for
Atmospheric Research.
(Image: Jennifer Stern) 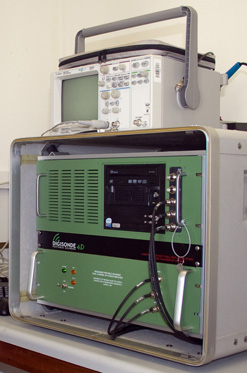 The Hermanus Digisonde DPS-4D is the
latest, state-of-the-art ionosonde and the
first of this model operational in the field
anywhere in the world.
(Image: Jennifer Stern) 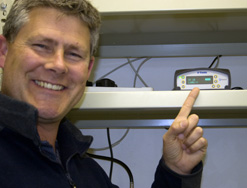 Ben Opperman points out the heart of the
GPS ground station. It may be small, but it
packs a lot of power.
(Image: Jennifer Stern) 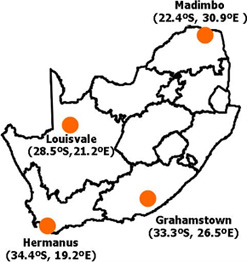 South Africa’s Hermanus Magnetic Observatory (HMO) has recently installed a new ionosonde, an instrument which analyses the space weather patterns that may damage and disrupt electronic and communication systems on earth.

The instrument is a Digisonde DPS-4D, the latest, state-of-the-art ionosonde and the first of this model operational in the field anywhere in the world. Developed by the University of Massachusetts Lowell Centre for Atmospheric Research, it was bought with funding from South Africa’s Department of Communications.

Lying outside the whale-watching coastal town of Hermanus in the Western Cape, HMO is nothing like an astronomical observatory. There are no big telescopes and no huge domes and things, just a few single-story white buildings and a couple of antennas scattered around 16 hectares of low-lying shrubs. In spring it is a riot of colour, with pretty fynbos plants in full bloom.

The first magnetic observatory in South Africa was set up on the campus of the University of Cape Town in 1932, but it wasn’t long before the new suburban railway line and other developments made accurate measurements impossible. So a new observatory was established near Hermanus in a magnetically clean site. It started operating in January 1941, and is still going strong.

Few people have the faintest idea of what magnetic observatories do, and why. Well, they measure the earth’s magnetic field. They do this to analyse, understand and ultimately predict space weather. In fact, it is more accurate to say that the HMO measures space weather, because there is more to it than magnetism.

In space, weather refers mainly to the intensity of solar wind, and the composition and nature of the various layers around the earth. And in order to have the vaguest understanding of solar wind, we need to take a long hard look at the sun – figuratively of course, or we’ll blind ourselves.

The sun is a huge mass of burning hydrogen that creates an enormous amount of energy by nuclear fusion, energy it constantly emits into space. The earth intercepts a small percentage of this energy, which helps create and sustain life.

This solar wind, as it is called, consists of energetic particles such as electrons and ions, which are collectively known as plasma. Plasma is the fourth state of matter after solids, liquids and gases. It is created when any substance is broken down to its constituent atomic particles. And the amount, nature and intensity of plasma and solar wind make up space weather.

The core of the earth is made up of magnetic iron and nickel that, together with the planet’s rotation, creates a strong magnetic field. Without the field, the background solar wind would blast the surface of the earth into a dead and barren rock.

Space physicists call this field the magnetosphere, one of the most important layers surrounding the atmosphere. The magnetosphere extends from about 1 000 kilometres above the earth’s surface to about 10 earth radii on the Sun-facing side of the planet.

You may remember those neat little diagrams from high school geography that showed the earth with concentric circles representing the different layers of the atmosphere and those above it. Well, it’s not quite as tidy as that. First, there is quite a bit of overlap and, second, the layers are constantly changing – just like the weather. In fact, those changes are space weather.

And that’s what the new ionosonde is designed to study.

So how does it work?

An ionosonde sends a radio signal from a transmit antenna and receives it with one or more receive antennas and then, by measuring the time taken, calculates the height of the ionosphere.

“The Digisonde generates and amplifies a signal on a range of frequencies,” explains Lee-Anne McKinnell, a research physicist and space physics group manager at HMO. “These are transmitted through the atmosphere into the ionosphere. As they enter the ionosphere they start slowing down because the ionosphere is a plasma, which is a diffuse medium that becomes more diffuse as it gets higher.”

Think of it as refracting when it enters a new medium, in the same way that light is refracted through a prism.

Anyhow, the wave slows down until it is in resonance with the plasma frequency. Then it bounces back to the four receive antennas. One antenna would be sufficient to work out the height of the ionosphere but, with four, it is possible to measure the angle of arrival and to obtain more data about the nature of the plasma.

There are three other ionosondes in South Africa, all of which are basically the same, just one generation older. These are at Grahamstown in the Eastern Cape, Louisvale near Upington in the Northern Cape, and Madimbo in the far north of Limpopo.

The Digisonde is currently programmed to record four measurements an hour, as are the other three observatories. The results are collated and sent to a central database where they are further collated and made available to participating stations. The HMO is part of a global network, and has access to readings from about 200 ionosondes all around the world.

This may all seem obscure and esoteric science, useful only for earning PhDs to decorate the walls of the ivory tower, but studying space weather has real-world, life-or-death benefits.

The first and probably most important reason for the research is that the magnetosphere protects us from excessive radiation. The earth sits squarely in the path of the solar wind but, as the energetic particles that make up this wind are also magnetic, they are deflected around the earth by the magnetosphere. So the atmosphere is left intact.

Space weather also affects our daily lives in ways that we can, to a certain extent, control. But only if we know what’s going on up there.

The ionosphere is virtually defined by its ability to transmit radio waves. So anything that depends on efficient long-range radio transmission will be affected by adverse space weather. This includes long-distance phone calls, satellite television, global positioning systems (GPS) and, most importantly, the high-frequency radios used by ships and aeroplanes.

While it’s no sweat to go without satellite television (although that depends on whether the World Cup final is on), and you can cope without those phone calls from your aunt in New York, GPS and long-distance radios are essential to safe travel, as well as rescue and disaster management.

Like our weather on earth, space weather is changeable and, unsurprisingly, more difficult to predict. While the background solar wind remains relatively constant, events such as solar flares occur from time to time.

A solar flare is a huge explosion on the surface of the sun, ejecting energetic and magnetic particles in what is known as a coronal mass ejection. The resulting cloud of charged particles that hurtles towards the earth is called a geomagnetic storm. Solar flares and geomagnetic storms are pretty rare events but, when they do occur, they can cause havoc.

On 13 March 1989 a huge solar flare provoked geomagnetic storms that disrupted electric power transmission in Québec in Canada, blacking out most of the province, and leaving 6-million people without light and power for nine hours.

More recently, on 29 October 2003, a geomagnetic storm disrupted satellite and high-frequency radio transmission in many parts of the world and, in South Africa, may have damaged a number of Eskom transformers.

Another geomagnetic storm in December 2005 knocked out satellite-to-ground communications and GPS signals for about 10 minutes, which doesn’t sound like that much of a big deal unless, of course, you happened to be in a plane approaching a foggy airport at the time. There were no resulting airline accidents, but it’s not a nice thought.

The ionosonde is only one of HMO’s many projects. Another, run by research physicist Ben Opperman, utilises the fact that the ionosphere is the source of the greatest error for global positioning systems.

HMO has a permanent GPS ground station, owned by the Chief Directorate Surveys and Mapping, set up on a well-surveyed spot with its coordinates literally cast in cement. The ground station antenna receives two signals of different frequencies, as opposed to the single signal received by your hand-held hiking GPS.

The ground station is fixed, so Opperman is not interested in establishing its location. What he is looking for is error. If the reading indicates that the ground station is five or 10 metres east or west of its real position, that tells him something about the nature of the ionosphere that very second.

By collating his results with the other 45 GPS ground stations in South Africa, he gets 1 000 readings a second. This immense amount of data enables him to map the electron density of the ionosphere.

Like the ionosonde programme, this is part of a global network that is collated in real time all over the world. This allows the GPS system that helps you get to your next meeting to be updated every four hours to correct for ionospheric weather conditions.

The more we know about the ionosphere, the more prepared we’ll be for geomagnetic storms and the havoc they cause. Because the energised particles don’t move as fast as light, we may have a couple of days’ warning of new events.

Of course, like earth weather, we won’t be able to stop it, but we can batten down the hatches by putting satellites into hibernation mode, protecting electrical transformers, and taking whatever action is necessary to ensure safe navigation and aviation. Knowledge is power.