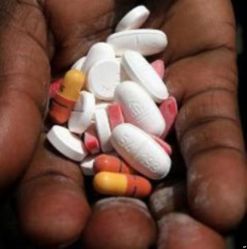 From April 2013 HIV/Aids sufferers who are on antiretroviral treatment will need to take only one tablet, which has all the ingredients of the three they are taking now.
(Image: Flickr)

Taking three tablets a day has been the lot of HIV-positive people in South Africa, until now, that is. HIV/Aids sufferers who are on antiretroviral (ARV) treatment will be able to take only one tablet, which has all the ingredients of the three, from April 2013.

The change comes after the government awarded a tender for a single dose of the triple combination of tenofovir, emtricitabine and efavirenz. The announcement came right before World Aids Day on 1 December, and was welcomed by many organisations working in the field of HIV and Aids.

In its National Strategic Plan 2012-2016, launched in December 2011, the Department of Health integrated HIV and Aids and tuberculosis as diseases in need of urgent attention. Health Minister Aaron Motsoaledi said: “Experts tell us that fixed-dose combinations are convenient for patients and health care workers and also increase adherence.

“Our duty was to provide policy; the clinicians are the experts and will decide on the criteria.”

Dr Francesca Conradie, the president of the Clinicians Society, said: “Studies have shown that the rate of adherence is much higher when people [take] one pill instead of three a day.”

The Clinicians Society is an NGO with a membership of 3 000 health care workers with an interest in HIV.

Another highly visible NGO, the Treatment Action Campaign (TAC), said: “TAC welcomes [the] government’s announcement that for the first time, first-line fixed-dose combination [FDC] ARVs and third-line antiretroviral medicines will be procured for use in the public sector. TAC has been campaigning for the introduction of such FDCs in the public sector for many years.”

The TAC promotes increased access to treatment, care and support services for people living with HIV and campaigns to reduce new HIV infections. It added that the benefits of FDCs extended beyond patients to health workers and health systems.

“FDCs will make prescribing, dispensing and monitoring treatment easier for nurses and pharmacists. They will also simplify procurement and supply chain management. This is particularly important given the on-going challenges with medicines supply, leading to shortages and stock-outs of ARVs and other critical medicines,” it said.

The TAC will help with the communication, education and awareness campaign regarding the introduction of first-line fixed dose combination drugs because it is something new. “We will also conduct workshops on the new third-line treatment and where it is available in the public sector,” it said.

Doctors Without Borders (MSF), an international medical humanitarian organisation created by doctors and journalists in France in 1971, also welcomed the announcement. Dr Gilles van Cutsem, MSF’s medical co-ordinator in South Africa, said: “The inclusion of FDCs is good news for the 1.7 million people currently on ARVs in South Africa, because they now finally have access to simpler and improved treatment options.

“Rolling out drugs in FDC formulations will have significantly positive implications to help keep patients adherent to their life-long treatment.”

The MSF added that FDC formulations would also relieve the burden on the South African health system because with fewer pills to pack, transport and dispensing costs could also drop.

HIV and Aids in South Africa

According to Avert, an estimated 5.6 million people were living with HIV and Aids in South Africa in 2011, the highest number of people in any country. Although 270 190 South Africans died of Aids-related causes that year, the number of deaths was 100 000 fewer than in 2001.

Avert attributes this to the massive scale-up of treatment in the last few years. In this time, the country has set up the world’s biggest HIV treatment programme, and life expectancy has gained five years, according to Avert.

Avert is an international HIV and Aids charity. Based in the UK, it works to combat HIV and Aids worldwide through education, treatment and care.