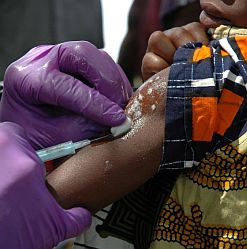 The discovery of immune system proteins
that can protect against different HIV/Aids
strains may lead to the design of a much
needed vaccine
(Image: www.ght.org)

HIV/Aids organisations in Africa are hopeful that the latest discovery of a protein that can protect against all HIV strains will lead to a vaccine against the epidemic plaguing the continent.

Researchers have discovered certain antibodies that are highly effective against the HIV-1 strain of the disease.

“I am more optimistic about an Aids vaccine at this point than I have been probably in the last 10 years,” said Dr Gary Nabel of the US National Institute of Allergy and Infectious Diseases (NIAID), who led the study.

In September 2009, researchers reported their biggest success yet, with a vaccine that appeared to slow down the rate of infection by 30%. This vaccine was tested over a six-year period among Thai volunteers, but although the trial, sponsored by the US Army and Thai health ministry, made it to Phase III it did not continue to completion and left many questions unanswered.

“There are two main types of the virus: HIV-1 and HIV-2, with the former being the most prevalent in Africa. HIV-1 is classified into four groups which further fall into several sub-types. These different strains make it difficult to produce a vaccine that could protect an individual from the virus, mainly because of what is called super-infection or co-infection,” said Nabel.

This means that a person with one strain of the virus can be infected with a different strain. Therefore, a person vaccinated against one strain is not necessarily protected against other strains.

Researchers currently spend precious time and resources testing vaccines against the diverse strains in trials in many different regions. To date it has been almost impossible to make a vaccine that will have a significant effect on the virus, because it attacks immune system cells and constantly mutates, making it difficult to produce medication that can keep up with it.

Researchers have been looking for those parts of the virus that do not change, so they can design a vaccine that will protect against the mutated versions.

The VRC01 antibody, one of the new finds, can attach to and neutralise 90% of the different strains of HIV-1, Nabel said. The antibody was documented in the prestigious journal Science in July 2010.

Nabel said they hope the new discovery will lead to protection against all strains – theoretically “hitting many birds with one stone.”

He and his team found two of the new antibodies in the blood of an HIV-positive patient who had not become ill despite the infection. These people are referred to as non-progressors and are the subjects of much study to establish why their bodies control the virus better than most patients. Using a new molecular device that they invented, the team then tracked down the B-cells, part of the immune system, which made these particular antibodies.

With another experimental technique, they managed to freeze one of the antibodies as it attached to and was about to neutralise the virus. Through an imaging process called x-ray crystallography, they were able to get an atomic-level image of the antibody.

“Being able to see what the structure looks like could enable researchers to design a vaccine using a process called rational vaccine design, akin to an established technique for making drugs called rational drug design,” said Nabel.

NIAID director Anthony Fauci said, “The discovery of these exceptionally broadly neutralising antibodies to HIV and the structural analysis that explains how they work are exciting advances that will accelerate our efforts to find a preventive HIV vaccine for global use.”

HIV/Aids is the leading cause of death in Africa. The virus has caused enormous anguish to the people of the continent, and orphans children on a daily basis, leaving them vulnerable and in many cases, infected.

“I live and work in a community that has been hit hard by the HIV pandemic, but a discovery like this could really be the kind of breakthrough that could benefit the people of this community, and Africa as a whole.”

Olga Gathuya works for a women’s HIV/Aids organisation in Nairobi, Kenya. She said that while they are encouraged by the findings,they are also sceptical. “We often hear about new findings but they often don’t amount to much in the end. This discovery sounds well researched and quite possible; I hope it leads to a real step forward. Africa has suffered greatly from this disease and we are looking every day for a scientific breakthrough.”

Dr Gregory Olawale from Nigeria is optimistic about the creation of a vaccine. “Once they find a vaccine that can protect against HIV-1, which is most prevalent, I believe that would be a huge leap for research. The discovery of this protein sounds pretty close to that and I am hopeful that a vaccine can be designed and tested soon.”