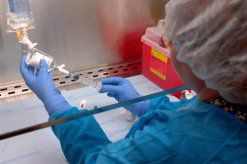 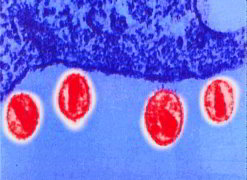 Researchers hope that the days of the HIV
virus, seen here in red emerging from an
infected cell, are numbered.
(Image: Boehringer Ingelheim)

For the past two decades, the search for an Aids cure has been the medical world’s El Dorado; elusive and mythical. The African continent has been particularly hard hit, and South Africa especially, which until recently had one of the fastest HIV infection rates in the world.

Figures released in the 2009 HIV Prevention Gauge, published by NGO LoveLife, showed that in the past five years the prevalence of HIV among 15- to 24-year-olds has dropped, indicating that the rate of new infection has also decreased sharply.

But more needs to be done. Now, South Africa and Italy are working together towards a vaccine that could lead the world to a cure.

The trial, known as ISS T-003, is part of a collaborative effort between Italy’s National AIDS Centre (CNAIDS) and its National Institute of Health (ISS). The venture aims to support the South African health ministry’s implementation of a global HIV/Aids response programme.

The trial, which launches in May, is entering its second phase and will last up to a year. It will be conducted in South Africa on more than 200 HIV-positive participants between the ages of 18 and 45.

Researchers and staff from the Medical University of South Africa’s Clinical Research Unit (Mecru) – based at the University of Limpopo’s GaRankuwa campus, north of Pretoria – will oversee the work.

Previous attempts at finding a vaccination for HIV/Aids have been futile but Mecru’s principal investigator Professor Maposhane Nchabaleng remains optimistic about this vaccine as it was successfully tested on animals in Phase I.

As opposed to a preventative vaccine that tries to stop an uninfected person from contracting a disease, a therapeutic vaccine aims to boost a specific immune response to a virus or bacterium in those who are already infected with the germ. In effect it helps to restore healthy functioning of the immune system in infected persons so that progression of the disease is reduced.

This particular vaccine is based on the HIV-1 Tat protein, which is believed to regulate production of the virus within the body. Once in a cell, Tat also sends a message to neighbouring cells to make them more susceptible to entry of the virus. According to CNAIDS, a Tat-free virus can enter a cell but can’t replicate.

The first phase, according to ISS spokesperson Dario Armini, was carried out in Italy. He said South Africa and Italy established a relationship in 2007 as it was believed South Africa had the capacity to carry out clinical trials.

Armini stated that though the trials are in South Africa and are being conducted by South African researchers, the intellectual property for the vaccine will belong to the ISS.

If the product passes the second phase, then it will move to the third phase where it will be tested on a larger number of people.

Mecru’s Nchabaleng said Phase II will be crucial in determining the success of the vaccine in humans.

“We now want to prove that the vaccine slows down progression of the disease. In this phase we have to ask the question, ‘Will it activate the immune system?’”

In the third phase, participants will receive the dosage regarded as the safest and most effective in previous phases. The third phase can last up to four years and on its completion all documentation is submitted for regulatory approval. This phase, which will hopefully end with registration, production and marketing of the drug, is often followed by Phase IV and further data analysis.

Nchabaleng said the team will soon head out to recruit suitable participants for the project. However, she knows that dealing with HIV/Aids is a sensitive issue for some individuals.

“We have to educate the people first about the research and once they understand it, then they can come in,” she said.

Since the project is based in GaRankuwa, the researchers are looking for candidates from surrounding areas to cut down on participants travelling long distances.

According to a press statement by the Department of Health, participants will have to visit the research clinic at least 12 times during the year of the study, at four-weekly intervals. They will receive the vaccine and, on three different occasions, a placebo.

Suitable candidates for the study have to be infected with HIV-1 and must currently be on anti-retroviral treatment. They must also have low levels of HIV-1 replication, and a CD4+ T-cell count equal or above 200 cells. They should also test negative for Tat antibodies.

Women who are able to fall pregnant must agree to use effective birth control from at least three weeks before the first injection, and continue with it until the last clinic visit.

Nchabaleng said Walter Sisulu University’s HIV Vaccine Research Unit in Mthata, Eastern Cape, will also participate in the programme as soon as the facilities for research have been set up.