Mauritian President Ameenah Gurib-Fakim has been named the vice-chairman and trustee of the Planet Earth Institute (PEI). The organisation is striving for the scientific independence of Africa. South Africa is also actively engaging young people to take up careers in the Stem fields. 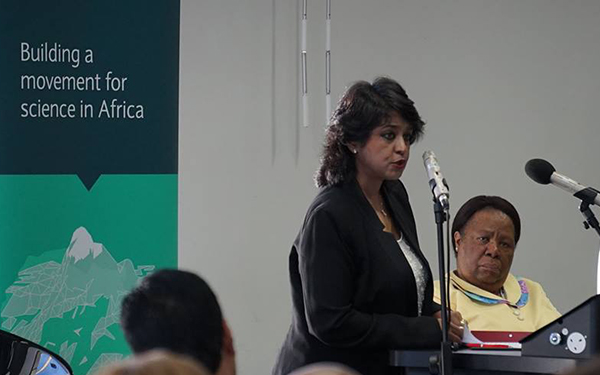 Newly appointed vice-chairman of the Planet Earth Institute, Ameenah Gurib-Fakim, gives a keynote address at the London headquarters of the institute on 1 July 2015. South African Minister of Science Naledi Pandor is in the background. (Image: Facebook)

• Meet the new president of Mauritius
• New push for careers in science and innovation
• Infographic: Africa’s best brands
• Enactus promotes entrepreneurship, innovation
• Social assistance & your taxes: how many people do you support?

Scientist, biologist and president of Mauritius – now Ameenah Gurib-Fakim can add another role to her list: she has been appointed vice-chairman and trustee of the Planet Earth Institute (PEI), an international non-governmental organisation (NGO) striving for the scientific independence of Africa.

“Mauritius has a proud track record of investing in scientific excellence and developing research,” she said. “In the future, science, technology and innovation will be vital in creating jobs and prosperity for our citizens in Mauritius and across the mainland African continent.

“I look forward to helping lead the PEI’s work as vice-chairman and trustee, and in turn to contributing to our continent’s increasing scientific and technological excellence, as the underlying foundations of our sustainable development.”

PEI will also open an office in Mauritius to run science, technology and innovation programmes. The organisation’s headquarters is in London; it also has an office in Luanda, Angola.

The Mauritian office will open on 23 November. There will also be a high level meeting with African government ministries, international institutions, private businesses, local and pan-African universities, and civil society. A policy roundtable will focus on “Mauritius and Africa’s scientific independence: the role of business”.

Soon after becoming president, Gurib-Fakim opened up in an interview with TED (Technology, Entertainment, Design), the global set of conferences run by the private non-profit Sapling Foundation. She said as a female biologist, she had been through the glass ceiling but would like to set a positive example for young people, especially girls. “I hope to be a role model to promote the learning of science, to make it interesting and sexy.”

According to the PEI, Africa’s scientific output is among the lowest globally. “As a continent of over a billion people and more than 50 nations, it has been producing roughly the same amount of scientific research as the Netherlands for the last 20 years,” the institution’s website reads.

The continent also has one of the world’s lowest tertiary enrolment rates – of 7% compared to a world average of 30% – and “science is often further underrepresented and overlooked by students, with only around one in 10 choosing Stem (science, technology, engineering, mathematics) subjects at university”. As a result, Africa continues to look elsewhere for scientific knowledge and expertise.

Africa is lagging behind the rest of the world in terms of Stem subjects, but progress is being made. (Image: Screengrab via PEI)

It would like Stem subjects to be part of governments’ policies and priorities, to have the continent train and retain African scientists, and inspire the next generation into the field. “Ultimately, we believe scientific independence means that African problems can be solved by African-led solutions. Yes, supported by working in partnership with others around the globe, but with Africa independent and empowered to design and deliver its own sustainable future.”

Dr Álvaro Sobrinho, the chairman of the PEI, said while Africa had sustained economic growth over the past decade, scientific and technological output had not kept pace. “Yet, if we want to ensure that sustainable development is a reality for all, we must make greater investments in science and technology, and equip our next generations with the skills they need to compete in a globalised, 21st century workplace.”

The country’s National Development Plan (NDP) aims to promote initiatives that offer young people access to higher education, skills development and training opportunities. It would also like to improve South Africa’s and Africa’s place in the world.

There are numerous projects running to encourage young people to tackle Stem subjects, from school into university.

National Science Week is held annually in South Africa to celebrate the Stem subjects, including innovation. It is led by the Department of Science and Technology and it brings together various stakeholders, role players and interest groups to promote awareness of the value of Stem to people’s daily lives.

“We have an unfortunate legacy inherited from the former education system of our country, which discouraged black learners from taking mathematics and science for matric,” said Science and Technology Minister Naledi Pandor at the opening of the Unesco Africa Engineering Week at the University of Johannesburg in 2014. She called on children at the event to reverse the legacy and take up those subjects.

“Our desperate need is for you, as the future of this country, to take the decision from Grade 10 right through to Grade 12, to study maths and science at school, and to persevere with these subjects, right up to university,” the minister said. “If you stick with this decision, in 20 years’ time our country will be transformed.”

Bayanda Madi, an Ncube High School student, was inspired. “By studying maths and science, young people will be able to help South Africa develop,” she said. “I have learned that engineering makes life easy; engineers build bridges and roads to improve movement and create a healthy environment in communities to reduce overcrowding which often brings diseases like TB, for example,” said the aspiring mechanical engineer.

The Department of Science and Technology was also behind the launch of the online information hub, Mzansi for Science. It contains career and bursary information, and information about funding in the sector.

“We are on a mission in Mzansi to make all South Africans realise that the gold of our tomorrow does not lie underground but in the minds of our current and future technologists, scientists, engineers, and innovators,” reads the website. “Our beautiful country is a gold mine of ideas and new inventions just waiting to happen.”

The career opportunities in the fields of science and technology are endless. What are you currently studying or hoping to study in the near future?

Posted by Mzansi For Science on Tuesday, September 1, 2015

The site was also created to raise awareness about the role of science, technology and innovation. It also celebrates unsung South African heroes and encourages South Africans to study, support and invest in the sciences.

We have started a movement to get all South Africans to use #science, #technology and #innovation pic.twitter.com/y6zkkoNqbz

South Africa’s riches don’t lie underground, but in the minds of scientists and innovators. Together we can achieve great things!

The department partnered with the South African National Space Agency, the Technology Innovation Agency, the Mineral and Metallurgical Innovation (Mintek), the Academy of Science of South Africa, and the National Research Foundation to create the portal.