Africa is about to launch its first private satellite. It’s a unique achievement – not least because the engineers designing the satellite’s payload aren’t veteran astrophysicists, as you might expect. They’re teenage schoolgirls. 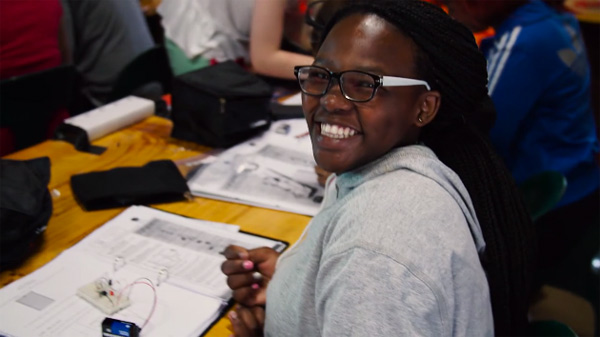 Africa is about to launch its first private satellite.

Scheduled for late 2016, the launch will make Medo – an acronym for the Meta Economic Development Organisation – the first private company in Africa to build a satellite and send it into orbit.

It’s a unique achievement for two reasons. First, South Africa (where the company is based) has only ever sent three satellites into space. And second, the engineers designing the satellite’s onboard experiments aren’t veteran astrophysicists, as you might expect – they’re teenage schoolgirls.

Medo Space has one aim: to equip school girls in Africa with the science, technology, engineering and maths (Stem) skills they need to compete and thrive in our digital future. What better way for girls to learn that the sky is not the limit than to get them to build and launch space satellites that connect the continent?

Why does Medo focus specifically on young women? The organisation discovered that while 80% of jobs are predicted to require a Stem-related education by 2020, less than 10% of young women are currently interested in studying science, tech, engineering and maths subjects in further education. 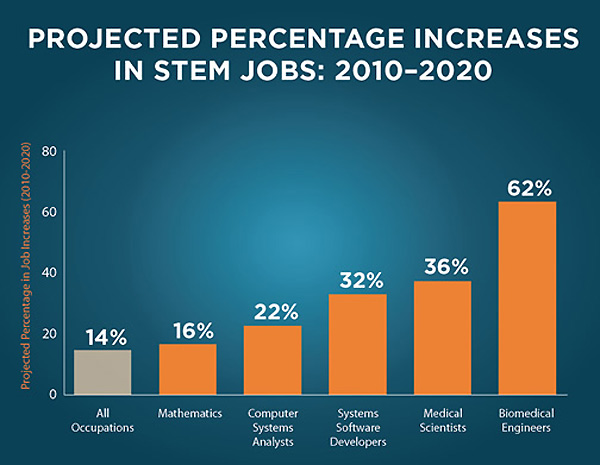 Graphic: US Department of Education

“Ten to eighty percent is a huge chasm to cross, and we knew we needed a compelling project,” Judi Sandrock and Carla de Klerk of Medo Space writes on the WEF Africa website. “Enter our satellite programme, designed to stir up young women’s interest in science by having them literally reach for the stars.”

In the past three years, small-format satellites have come into their own as a means of collecting data about the planet quickly, cheaply and effectively. Medo Space aims to give young women a hand in the process, by having them design the payloads of private satellites.

Watch Judi Sandrock and Carla de Klerk of Medo Space discuss their Girls in Space initiative at the World Economic Forum on Africa in Kigali, Rwanda on 13 May 2016:

“Our motto, ‘Building the economy one job at a time’, is normally aimed at start-ups and entrepreneurs, but we soon realised we should be starting earlier than that,” say Sandrock and De Klerk. “To have any real effect on the economy, we found, we would need to engage with people at school level.”

The aim is to inspire young women with a passion and excitement for Stem subjects. Medo wants them to go back to their schools as ambassadors for science and tech, and spread their enthusiasm to other students.

Nwabisa Sitole, a Medo Space graduate and future electrical engineer, says: “I feel inspired. I never imagined a girl from a township doing these big and amazing things, learning from world-renowned astronomers.”

Sometimes big things can start from something as small as a confidence boost, which in the long run will enable young women to take paths that have traditionally been dominated by men. Medo’s goal is to have every young woman leave their programme with confidence, passion and a sense of power.

The Medo Space Programme is put together in three phases:

“We have found that participants at our workshops and bootcamps often return to school with renewed energy for their subjects and new goals for the future,” say the Medo team. “Most go on to enter Stem-related fields of study after high school.”

While the ultimate goal is to produce a raft of female engineers, there is much work to do first, in both Africa and South Africa – especially when it seems the statistics are squared against progress.

“We need to raise the pass rate of national exams, so we can start setting up young people for success, regardless of the subjects they pursue,” say Sandrock and De Klerk.

“Our aim for the year is to help as many individuals as possible, so that we can create a generation of passionate young minds that contribute to the economy – not only with skills, but with solutions. We are definitely up to the challenge. This is our private-sector solution.”

Edited and compiled by Mary Alexander