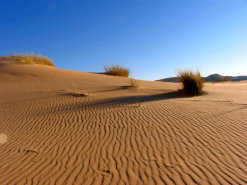 The challenge for scientists is that global
change presents not only known problems,
but also others that can only be predicted.
(Image: Barend Erasmus) 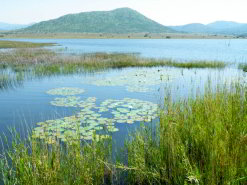 There is growing concern that too many
people are dependent on fewer and non-
renewable resources.
(Image: Wilma den Hartigh)

Dr Robert Scholes, a Systems Ecologist at the Centre for Scientific and Industrial Research, who was one of the speakers at the launch, said that South Africa is the leader in Africa regarding the analysis of global change issues.

“Our capacity to move beyond highlighting the problem, into generating solutions that are appropriate for our circumstances will be determined by how well we are able to draw together the many threads of this complex challenge,” Scholes said.

He said that the challenges brought about by global change require an integration of climatological, ecological, engineering, economic and social expertise.

“This is what the Wits Global Change and Sustainability Institute sets out to do,” he said.

Since the world population mark reached seven-billion, there is growing concern that too many people are dependent on fewer and non-renewable resources.

This could lead to the extraction of more resources and the exploitation of new areas, which negatively affects land cover. Combined with climate change, these issues are collectively known as global change.

“We do know that these challenges of the future will be complex, and that it will require a collective contribution to better understand and resolve these issues,” said Prof Andrew Crouch, Dean of the Faculty of Science and acting director of GCSRI.

The challenge for scientists is that global change presents not only some known problems, but also others that can only be predicted.

The institute would bring together Wits University’s strengths around issues of global change, climate change and sustainability.

Some of the research areas to be explored include: global change adaptation and mitigation; biodiversity, human health and the nutritional status of rural communities; sustainable urban living through improved water, waste and energy management; pollution, extraction and ecosystem health; environmental policies; building resilient cities and innovation policy-making, effectiveness and support.

Speaking at the launch, Dr Heide Hackmann, executive director of the International Social Science Council, congratulated the university on establishing a “dynamic and exciting new initiative.”

Hackmann said that the new unit is in line with many calls for more integrated research.

“What this centre wants to do is critically important,” she said. “We live in extraordinary times facing unprecedented challenges and we are aware of the increasing magnitude of environmental problems and disasters.”

Another important function of the new institute is to make science accessible.

Dr Stuart Piketh of the Climatology Research Group at the Wits School of Geography, Archaeology and Environmental Studies, said, “Scientists can tell you about changes to atmospheric pressure, how clouds would rain less if you added more aerosols to it, but we need to explain how this matters to the man on the street.”

Hackmann also said that there is “unrelenting pressure” on academics to be relevant and make a difference.

Various members of the GCSRI are working to obtain additional funding to expand the activities of the Institute.

Prof Helen Laburn, deputy vice-chancellor of Research at Wits University, said that R28-million (US$3.4-million) has been secured so far for the centre’s four core programmes over the next five years.

The core programmes are: vulnerability (adaptation and research); ecosystem and human health; people, practice and policies; and building resilient cities.

Laburn said that the GCSRI is the first of eight inter-disciplinary multi-million rand facilities to be established at Wits University as part of its anniversary celebrations.

Wits University turns 90 next year, and to mark this milestone, the university will be launching the Wits Century campaign.

Eight new “21st century institutes” will be launched in the next decade, focusing on key issues that face society today. The institutes will attract the best academic and research talent, staff and students in the world.

The other institutes will focus on evolutionary sciences; mining, minerals and exploration; molecular biosciences; population, health and society; cities; energy and finance.