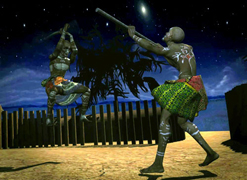 The Games and Learning Indaba, organised by the Shuttleworth Foundation and held in August 2008, explored the potential that digital game-based learning holds for formal education and informal learning in South Africa, especially in improving communication and analytical thinking skills. A number of game developers, teachers, gamers, academics and other experts attended the event.

In his presentation titled Social constructivism in games-based learning in the South African context, Alan Amory, an educational ICT professor in Johannesburg University’s Faculty of Education, maintained that games are useful social construction tools, and any game has an inherent educational value that is there to be exploited.

“No technology is value-free,” he said. “It doesn’t matter if a game is gender-biased because we can use it to explore gender. It doesn’t matter if it is violent because we can use it to explore violence. It is not the tool itself that is important, but what you do with it. The process of deconstruction, where the game is used as a discussion starter about violence, gender bias, male dominance, etcetera, is where the real learning with games occurs.”

Amory has found that games in the learning context are most effective when players are required to work together to construct solutions. He particularly noted that tertiary students, while playing a game designed for better understanding of the biological functions of photosynthesis and respiration, achieved significant results when paired, rather than playing on their own.

This was because a team situation always gives rise to discussion and collaboration, and pupils developed better visualisation, logic, mathematical, reading and writing skills as well. Solo players, meanwhile, often learned to solve problems by rote – an unfortunate learning method that is far too prevalent in South African schools, said Amory.

Maths on a mobile

While online safety especially for children is a complex and important issue, according to Steve Vosloo, communication and analytical skills fellow at the Shuttleworth Foundation, the opportunities outweigh the risks although safety for pupils has to be the primary concern.

One of the advances made by South African educators is the use of popular mobile communication platform Mxit for maths education. Dr Math is a pioneering educational programme developed by Laurie Butgereit of the Meraka Institute, a division of the Council for Scientific and Industrial Research. Meraka investigates the role of information and communications technology in addressing South Africa’s developmental challenges.

Dr Math provides maths pupils from grade 3 to grade 12 with an instant online tutor between 2pm and 8pm on weekdays, and the occasional Sunday night. There are 20 teachers available to answer maths-related queries and to date some 3 200 pupils have used the service. Pupils will readily seek assistance because of the convenience of being able to turn to a teacher whether on the bus or the sports field, or in one case, in the bath.

“If you want to reach kids you have to do it using their own medium,” says Butgeriet, “and Mxit does that.”

According to a January 2008 report on Moneyweb, Mxit has over 6-million users, over 90% of them in South Africa, who send a mind-boggling estimated 200-million messages every day. While the application has been known primarily as a platform for entertainment and cheap communication, and has had its share of critics and controversy because children spend so much time using it, its new-found educational function may open up the way for a series of similar initiatives. Reports say that pupils who use Dr Math are also interested in science tutoring. The service is also far more affordable than a personal tutor, with a session costing the pupil up to R1 ($0.12).

However, teachers are often not as technically proficient as their pupils in this arena, a fact agreed on by Indaba delegates. In this case teachers can learn along with their pupils, and here the gaming environment may be a useful vehicle.

Vosloo, an expert in the use of communication technology for socio-economic development, says that learning through a mobile platform has huge potential for South Africa, as less than 10% of the population has internet access but a whopping 70% has access to a mobile phone.

While the educational game sector in South Africa still has a way to go to catch up to the international standard, developers are not sitting back.

There are several interesting locally developed applications already available, among them Mathstermind, a mobile puzzle game developed to teach maths to grade 10 pupils; Fashion Empire, a mobile game designed to teach business skills and maths to grade 10 pupils; OpenSpell, which addresses spelling skills and is available in all 11 official South African languages; and Cartesian Chaos, which helps pupils to understand the Cartesian plane.

Elsewhere in the world, many games are being developed with a specific social or educational purpose in mind. America’s Army was created by the US Army, which spent R49-million ($6-million) on its development before it handed the game over to specialists for adaptation to consoles, as a recruitment tool. The game gives players a realistic taste of life in the army, but it has been widely criticised because it targets children under 17.

The conclusion reached at the 2008 Games and Learning Indaba was that there is still a lot of work to be done in researching the potential of educational gaming. “Most educators need to be convinced that you can learn from playing video games,” said Vosloo. He added that the Shuttleworth Foundation supports the concept of game-based learning working alongside more conventional forms of learning – not supplanting them.

Do you have queries or comments about this article? Email Janine Erasmus at janinee@mediaclubsouthafrica.com.