Scientists working in the Cederberg region of the Western Cape have unearthed the remains of 450-million-year-old fish, the oldest fish fossils yet found on the African continent and among the oldest in the world.

Thought to be the remote ancestors of modern fish, the fish had no bones or teeth.

They have been working the deposits for 15 years, recovering a number of remarkable fossils.

“We nicknamed the fossil ‘Nelson’ in honour of the newly-elected president,” Aldridge said in a University of Leicester bulletin.

In the 11 years since then no more specimens were found, until this year, when the team recovered seven additional specimens.

“It’s worse than the London buses – you wait for two hours and then suddenly three come along together,” Aldridge said. “We waited for 11 years, and suddenly we found seven.

“They’re so primitive that they’re difficult to understand. They existed in the Hirnantian Ice Age 450 million years ago. They are totally new to science, and we have yet to describe them and to give them a scientific name.”

The fish are 50-million years older than other fossil fish found in Africa. They lived at a time when Africa, India, South America and Antarctica were joined together in the continent of Gondwana, the southern part of the patchwork supercontinent Pangea.

“These fishes come from a time in the remote past when Africa was in an ice age, and before any animals had colonised the land,” Theron told The Star newspaper. “They are preserved where they lived in a shallow sea fed by melt waters from the receding ice sheets.”

“The fossils help to fill in a ‘missing link’ in the evolutionary history of the very early fishes,” said Aldridge.

“People may wonder how we know that these fossils are fishes, when we have no bones with which to identify them. The answer is that the exceptional preservation displayed in these rocks enables us to recognise the eyes, scales and even the liver of the animals. The impressions in the shale are very faint, but they are also very clear and diagnostic.” 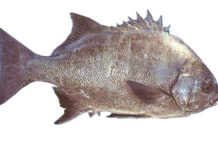