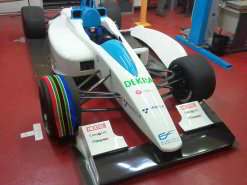 South Africa is one of the pioneering
hosts of the electric racing series.

The EF01 series is expected to be a
catalyst for the development of green
motoring innovations.
(Images: Formulec South Africa)

The future of international motorsport is on its way to South Africa – 2012 sees the birth of 100% electric motor racing with the official launch of the Formulec World Series.

The Formulec Electric Formula EF01 World Series, based on the Formula Three concept, is set to be decided over 10 races on five continents and will be racing through South Africa in October 2012.

By 2014, the Formulec team hopes to throw open the championship to independent manufacturers with their own cars.

Local events company Eco Promotions has scooped the Formulec contract as the official event promoter in South Africa. Experienced in staging renewable energy events, the company is now scouring the country for a suitable location, as the cars will be racing not on a track, but through city streets.

The low noise output of the vehicle makes it well suited to an urban street race, and because the event is not limited to a track, cities around the country can take turns to play host.

Motor racing has long been a platform for the development of new technologies, which in turn lead to these technological advancements filtering down to consumers.

With the world market for electric vehicles expected to reach 10% of total production by 2020, Formulec is looking to the future. The company intends to contribute to the acceleration of green automotive research, and help improve the efficiency of electric vehicles.

South Africa, as an EF01 host, will take its place at the forefront of renewable energy technology innovations. The country has already made its mark in this field with the development of the all-electric Joule, which is currently between the prototype and full production stages. It’s expected to debut on local showroom floors in 2014.

As concern grows over climate change and the planet’s oil reserves, the focus is shifting to finding new sustainable transport solutions such as electric vehicles, as manufacturers gradually look to phase out fossil fuel engines. With no exhaust, the electric car is eco-friendly and quiet, and is an attractive alternative in large cities where commuters grapple with the problem of increasing traffic.

The EF01 series will open up opportunities for innovators in the eco-energy industry to publicly showcase their technologies in a festival atmosphere at each event.

Designed to equal the performance of its cousin, the combustion-driven Formula Three car, the single-seater EF01 is more than capable. The fastest racing electric car in the world accelerates from 0-100kpm in a blistering time of under three seconds and reaches a top speed of around 260 km/h.

The two-wheel-drive Formula Three cars have 2 000cc four-cylinder engines. Formula Three is seen as one step below Formula One, with fine drivers such as Ayrton Senna, Michael Schumacher, David Coulthard, Ralf Schumacher, and Takuma Sato coming through the lower ranks to achieve success in the high-powered racing championship.

The EF01 took 30 months to come to life. In developing the EF01, Formulec and its partner, engineering specialist Segula Matra Technologies, have brought with a host of motoring experts on board, including Siemens, which is responsible for the car’s two electric motors; Michelin, which has adapted new energy-saving tyres to the power of the EF01 motors; Oz, which provided the rims; Hewland, which developed a unique transmission system for the EF01; and Saft, which developed the car’s special lithium ion battery system.

The bodywork has been shaped by, among others, the highly experienced Mercedes GP Petronas Formula One team.

The EF01 first took to the track in September 2010 at Magny-Cours in France, followed soon after by an outing on the Bugatti track at Le Mans. Its battery life allows it to race for up to 25 minutes, says Formulec, depending on the track, with a qualifying time similar to that of the Formula Three vehicle.

The car debuted at the Paris Motor Show in October 2010.