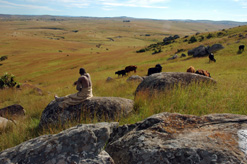 The picturesque Eastern Cape is the site
of a successful new scheme to harvest
water from fog.
(Image: Rodger Bosch,
MediaClubSouthAfrica.com. For more free
photos, visit the image library.) 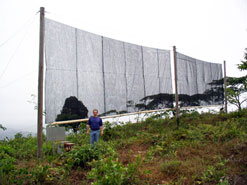 The system is simple in design and
concept, but extremely effective.
(Image: Unisa)

A climatologist from the University of South Africa (Unisa) has helped develop a system to harvest moisture from abundant mountain fog in a water-scarce region of the Eastern Cape, and communities there are already benefiting from it.

The project was successfully launched in Cabazane Village, in the rural Mount Ayliff area in the north of the province, in mid-March 2010 during the annual National Water Week.

The area, which falls in the picturesque Alfred Nzo district municipality, is bordered to the north by the mountain kingdom of Lesotho and much of the terrain is steep and remote, with very cold winters and mild summers. Fog is a frequent visitor and a ready source of clean water.

Professor Jana Olivier of Unisa’s School of Agriculture and Environmental Sciences has spent the past 20 years specialising in the properties and hazards associated with fog, especially for vehicles.

She later delved into the technique of fog harvesting. “We got funding from the Water Research Commission, and we designed the fog water system,” she said.

Olivier teamed up with Professors Johan van Heerden, Hannes Rautenbach and Tinus Truter – all of Pretoria University – in the development of the system.

Unisa is involved in ongoing research into water harvesting from fog, especially for isolated rural communities, where water is scarce and villagers often have to walk vast distances to fetch a few litres at a time.

However, the system is only practical where fog occurs for at least 40 days a year, and for a period of several hours at a time.

The project has also been rolled out in other dry areas of South Africa, including Venda, Limpopo, and the West Coast, but Mount Ayliff’s persistent fog yields the best results, producing hundreds of litres of water a day.

“The West Coast and the mountainous areas – stretching from the Soutpansberg in the north, along the Drakensberg in the east to the Cape Mountains in the south – have the highest fog harvesting potential,” said Olivier.

Mount Ayliff is located in the Umzimvubu local municipality, one of two municipalities within Alfred Nzo – the other is Umzimkhulu. Umzimvubu’s population is just 198 550, of which only 4% live in towns – the rest live in rural areas.

Safe drinking water is a continual problem as the area lacks essential infrastructure, including water on tap. Villagers are often forced to dip into natural springs, running the risk of picking up water-borne disease.

“We have a challenge … because about 40% of our community here does not have basic water,” said Alfred Nzo mayor Gcinikhaya Mpumza.

However, the villagers’ lives have changed with the installation of the water-harvesting system and its inexhaustible supply. No electricity is needed to power the scheme, which makes it eco-friendly and low-cost, and suitable for areas with no power infrastructure.

Because the technology is simple, the equipment does not need special maintenance. The system consists of a double layer of 30% shade cloth nets stretched between steel cables supported by posts, with a gutter beneath each screen to catch the run-off. All components are readily available in the area.

The Cabazane set-up involves around 700 square metres of netting, said Olivier, with each square metre of shade cloth yielding up to five litres of water a day – depending on the weather.

Water droplets in the fog are trapped on the nets. They get bigger and heavier as the fog rolls along, and eventually run down into the gutter and from there through a filter into storage tanks. The system works best when the wind is blowing, because the fog moves over the nets more rapidly.

The system is installed up on the mountain slope, where nothing more than gravity is needed to get the drops flowing into the tanks. Reports say that about 30 homes in Cabazane Village have already benefited from the project.

The quality of water is described as “very high”, falling within the World Health Organisation’s standards for potable water. “The water is incredibly pure because it comes from the clouds,” said Olivier.

Innovative schemes like the simple and cost-effective fog harvester are well-suited to South Africa, as it’s one of the driest countries in the world, with annual rainfall well below the global average. 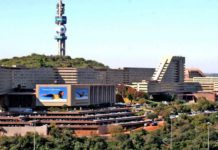 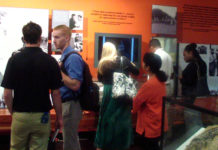 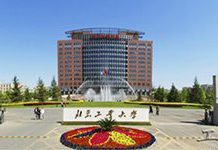 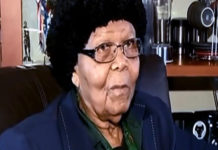 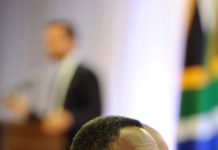