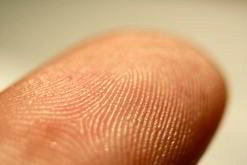 The new structural-fingerprint classifier
uses a combination of the structure
and arrangement of a fingerprint’s
features for identification purposes.
(Image: wikimedia) 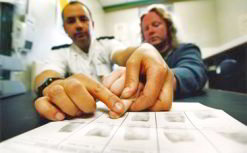 The new classifier makes it possible to
analyse both rolled and scanned
fingerprint features.
(Image: http://www.psni.police.uk)

In a world first, South Africa’s Council for Scientific and Industrial Research (CSIR) has developed a fingerprint-recognition technique that has the ability to identify prints with greater accuracy and speed, even if only partial information is available.

Unlike conventional fingerprint-recognition technology, the new device uses a combination of the structure and arrangement of a fingerprint’s features for identification purposes.

“There are similar fingerprint-recognition systems used elsewhere in the world, but what makes this one different is its classification component,” says Ishmael Msiza, one of the researchers from the CSIR Modelling and Digital Science Unit involved in the development of the new tool.

The structural-fingerprint classifier is unique as it uses two types of fingerprint features, located at different points on the finger. It reads the “core”, which is the turning point of the innermost loop of the ridge lines on the finger tip, as well as the “delta”, which refers to the triangular-shaped ridge located at the lower end of the side of the tip.

Msiza explains that although there are similar systems used elsewhere in the world, such devices are not able to classify a fingerprint with only partial information. “If one aspect is missing, a fingerprint will be classified as unknown,” he says.

The dual-functionality of the new structural fingerprint reader will reduce the time needed to identify prints and increase the crime-solving success rate.

The new classifier makes it possible to analyse both rolled and scanned fingerprint features.

Answer to a challenge

When applying for an identity document, people have always been required to roll their fingers on an ink pad to produce what is known as a rolled finger print. Msiza says that this method captures all the information needed for fingerprint recognition.

However, recently there has been a move to scanning fingerprints, instead of rolling. “The only problem with this method is that a scanned image might miss important fingerprint information such as not capturing the delta point located on side of finger,” he says.

The new classifier is the answer to this challenge, as is able to read and identify both rolled and scanned fingerprints.

Research into the new device, which started in 2009, was in response to a request from the Department of Science and Technology (DST). “The department wanted us to develop a fingerprint scanner that is aesthetically pleasing, small and compact,” he says.

Now that the research phase is over, the team is building a commercial prototype of the device. Once completed, the working prototype will be handed over to the DST for approval and distributed to various government departments for testing.

Msiza says the classifier will be of great use to organisations such as the South African Police Service, South African Revenue Service and the Department of Health, as well as the private sector.