The first MeerKAT antenna being wheeled out of its hangar, ready to be positioned at the telescope’s site near Carnarvon in the Northern Cape. Click for a larger view. (Image: SKA South Africa)

The first of the 64 huge antennae making up MeerKAT, South Africa’s main component of the colossal Square Kilometre Array telescope, was unveiled by science and technology minister Derek Hanekom on Thursday 27 March.

This was an important step towards the international SKA project which, when completed, will be the world’s largest and most sensitive radio telescope. We bring you 15 astonishing facts about the naming, size, complexity and astronomical accuracy of MeerKAT.

1. Originally called the Karoo Array Telescope (KAT), the project’s name was changed to MeerKAT after the South African government increased the budget to allow for 64 antennae to be built, 44 antennae more than the original 20 the developers had planned.

2. A meerkat, meaning “more of cat”, is a small mammal that lives in the Karoo desert – where MeerKAT is located. Meerkats are extremely smart and social. Timone, a character from the animated movie The Lion King, was a meerkat.

4. Once complete, MeerKAT will be sensitive enough to pick up a cell phone signal from as far away as Saturn.

5. A total of 170 kilometres of buried fibre optic cable will connect the antennae to the underground control room. 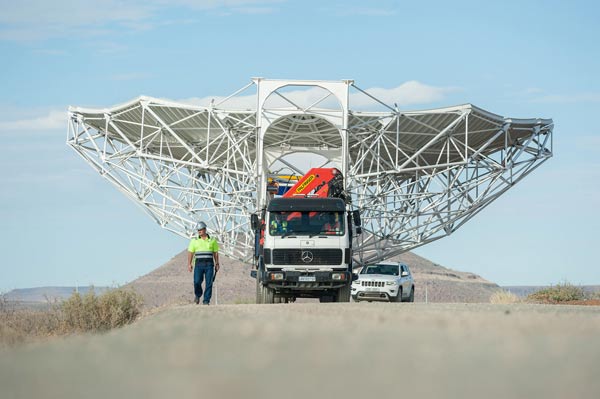 The antenna being transported to its site in the Karoo desert. Click for a larger view. (Image: SKA South Africa)

6. Each antenna will generate more than four gigabytes of data every second.

8. Forty-eight of the 64 receptors will be grouped in an area one kilometre in diameter, with the other 16 distributed more sparsely outside this area.

9. The largest space between any two antennae – a distance known as the baseline – will be eight kilometres.

10. Special positioners on each antenna will allow them to all point at the same part of the sky, or to move independently. 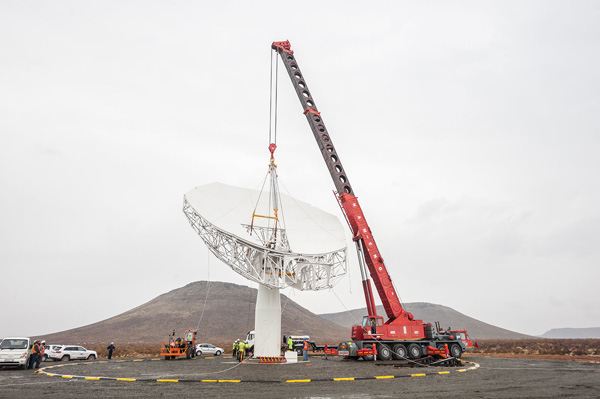 The antenna being erected by a massive crane. Click for a larger view. (Image: SKA South Africa)

11. These positioners will make the antennae incredibly accurate, allowing them to be pointed to within 1.4-thousandths of a degree in favourable conditions.

12. The main reflector on each antennae has a diameter of 13.3 metres, more than three times the length of a medium-sized sedan.

13. Cryogenic receivers will be cooled to -203°C, more than three times as cold as the lowest temperature recorded in Antarctica, making for increased sensitivity that will allow the antennae to register the faintest objects.

14. Nearly 5 000 cubic metres of concrete and just over 570 metric tons of steel were used to construct the antennae’s foundations.

15. MeerKAT has more than 150 000 internal sensors that monitor everything from electronic component temperatures to weather conditions and power consumption.