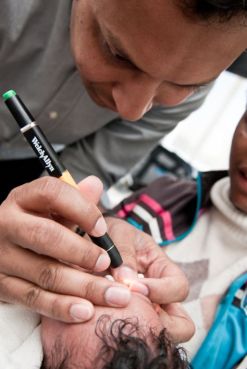 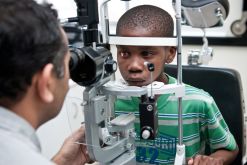 A new state-of-the-art paediatric eye-care centre has opened at the Inkosi Albert Luthuli Central Hospital (IALCH) in Durban in KwaZulu-Natal. The new facility is a major step forward for child eye health in South Africa.

The centre was established in partnership between the KwaZulu-Natal Department of Health and Orbis, an international non-profit organisation that works to fight blindness by providing quality eye care in developing countries.

The new facility forms part of a three-year strategy to improve children’s eye health in KwaZulu-Natal and alleviate avoidable blindness.

The Orbis Paediatric Eye Care Centre will offer specialised treatment and surgery for blinding conditions that are common in South Africa, such as paediatric congenital cataract, glaucoma, retinoblastoma and uncorrected refractive error.

“This is a world-class facility where the most complex forms of surgery can be done,” says Lene Øverland, director of programmes for Orbis Europe, Middle East and Africa.

Øverland says that although the new centre comes equipped with the best modern eye-care technology, it has been carefully designed with children in mind. “It is a child-friendly space and is designed in such a way that children feel comfortable going there,” she says.

The new facility is a timely response to a major need in paediatric eye care in South Africa, as only the Western Cape has specialised eye-care services for children within the government health sector.

“More centres are needed to relieve pressure on existing eye-care facilities in South Africa,” she says.

Orbis has identified sub-Saharan Africa as a priority region as it carries the heaviest burden of blindness globally.

According to World Health Organisation statistics, the greatest need is in developing countries, where 90% of the blind live. Further statistics indicate that up to 60% of infants die within two years of becoming blind.

“Eye care is often a neglected area of healthcare because it is not seen as big a threat as conditions such as HIV and malaria,” she says.

“In about half of the cases, paediatric blindness could be prevented if access to appropriate medical facilities were available at the right time.”

In May 2011 Orbis made a commitment to develop an additional 10 paediatric eye-care centres in sub-Saharan Africa by 2021. This centre at IALCH is the second of these 10 centres.

Øverland says that part of their work is to communicate the value of early intervention in eye care. Strengthening the referral network, training healthcare workers at primary, secondary and tertiary levels and improving awareness among parents and care-givers are other elements of the comprehensive eye-care plan.

“Early intervention is absolutely crucial and is a very important part of this project. We want to ensure that primary and secondary healthcare workers know when to refer cases for further treatment,” she says.

Research has shown that childhood blindness accounts for about a third of the total economic cost of blindness. Early intervention to address child eye problems can make a major difference to the quality of a youngster’s life.

“Restoring a child’s sight gives one of the best returns on medical investment and more importantly, it gives a child the chance at having an independent life.”