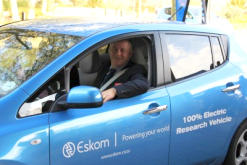 The Nissan Leaf will be introduced to South Africa later in 2013.
(Image: Assist247.co.za)

Eskom and Nissan have joined forces on a three-year research project to study electric vehicles, their charging requirements, and characteristics. With this, the national energy supplier and the car maker hope to prepare for the entry of electric vehicles into the South African market, and gain insight into their effect on the national grid.

This collaboration follows projects by the Department of Environmental Affairs and the Technology Innovation Agency aimed at creating public awareness of electric vehicles (EVs). Eskom’s general manager of research testing and development, Barry MacColl, explained: “Eskom has been doing EV research of one form or another for over 10 years now.

“The focus has changed from development of EVs to understanding their need for energy and the subsequent impact on the electricity grid. The recent developments by suppliers of hybrid and pure EV has made us realise that we need to watch this technology closely and be ready for the wave of EV deployment if it happens. Note we say ‘if’; we are not sure that there will be a quick uptake of these vehicles nationally or internationally but if it does happen we want to be prepared,” he said.

According to MacColl, the idea for the three-year research project came from one of the steering committees that focus on demand management and energy efficiency. “There is a small working group under this committee called the EV Care Group and it was fundamentally this group of people that gave birth to the idea that the best way to understand the EV and its impact was to have a small fleet of our own. When we looked at the market, we saw the Leaf as the only alternative at the time and so the partnership with Nissan was established after a commercial process.”

Electric vehicles are increasingly being produced and appear to be gaining popularity globally as a more environment-friendly and fuel-cost efficient alternative. There are a few models available in South Africa, such as the Toyota Prius and the Honda Jazz, and a homegrown EV, the Joule, was in development for a few years before that project folded.

Eskom therefore wants to ensure all the elements are in place before EVs flood the market. Over the next three years, it will invest R6-million (about US$600 000) – about R2-million a year – into electric vehicle research.

“Eskom is committed to a greener energy future and acknowledges that the current electricity mix in South Africa is too carbon intensive,” MacColl said, while admitting he was not sure whether South Africa was ready for electric vehicles. “That is part of what we are trying to find out. From an infrastructure point of view it is very linked to numbers and densities. Ten cars like we have at present does not require a large amount of energy but 10 000 cars might, especially if they are all parked in the northern suburbs of Johannesburg.”

Eskom does have a scenario in mind: “We think take-up will be slow and fairly geographically spread, allowing our network planners time to respond and strengthen the networks if required. Also, the current power shortage in the country is temporary and future energy forecasts show a return to higher reserve margins. Are South African people ready for EVs? I think this is the real question and time will tell. The three barriers to EVs – cost, range and infrastructure – will apply in this country as much as anywhere else.”

In comparing electric vehicles to diesel or petrol vehicles, MacColl explained that this depended on the specific vehicles as they all differed slightly. But the electric vehicle running cost was about 16% that of a petrol car, he said – at worst 20%. “Now this depends very much on the future price of electricity [at 8% a year for the next five years] and petrol.”

Eskom said it had received 10 Nissan Leaf cars to study, focusing on elements such as electricity use per kilometre, commuting costs and vehicle range. Other key points that will be included in the research are:

“We support the principle of electric cars, in line with Eskom’s aim of finding and enabling technology solutions for a cleaner future,” said Steve Lennon, Eskom’s group executive for sustainability.

The Eskom-Nissan partnership was announced on 28 May, by Nissan South Africa’s sales, marketing and aftersales director, Johan Kleynhans. It comes ahead of the car maker’s roll-out of its all-electric Leaf (leading, environment-friendly, affordable, family car), which will be on sale in South Africa later this year.

Kleynhans was delighted to hand over the vehicles for the research project, “the outcome of which will have long-term implications for the development of the entire EV industry”.

Stand-out features of electric vehicles include good torque and acceleration, low road noise, comfortable ride, smooth transition to higher speeds, a better awareness of energy consumption through the in-car displays of energy use and remaining range, and no need to visit the petrol station.

The Leaf is already on sale in Japan, the US and Europe. Its specifications include an 8 kW AC synchronous electric motor; zero emissions – 0g/km carbon dioxide emission; a maximum speed of 145km an hour; acceleration of zero to 100km/h in 11.9 seconds; a 3.3kW on-board charger for overnight charging; a 50kW quick charger for emergency top-ups while out and about; maximum torque of 280Nm/min-1; and a 24kWh lithium ion 360V battery.

MacColl added that Eskom also wanted to understand usage patterns and the car’s charging characteristics to design grid solutions and tariffs for e-mobility. “E-mobility is a way of moving people around in a more effective and cleaner fashion, which is critical for the economy.”

While South Africa used fossil fuels for many of its energy processes, a new approach was in the sights for all concerned, he said. “Eskom is intent on finding technology options suitable for implementation within the energy body.”

Eskom will also need to understand what electricity infrastructure is required and how such infrastructure is likely to be used, before electric cars become widely used in South Africa. Charging stations have been installed at Eskom’s head office, Megawatt Park, in Sunninghill, Johannesburg, and at its research facility in Rosherville in Germiston. Several portable charging stations will be moved with the vehicles so participants can charge the cars at home.

Electric vehicles are either charged slowly over eight to 12 hours, or quickly in less than 30 minutes. Each of these options has implications for the electricity provider. Eskom will also explore the possibility of discharging energy from the car’s battery into the national grid. The three-year research project will also consider financial compensation for those owners who discharge into the grid.

“The impact of electric vehicles on Eskom is not to be underestimated. While growth in this area is not expected to be rapid, the fast charge facility of many vehicles, combined with rapidly increasing battery capacities, means distribution networks can be severely overloaded during certain periods of the day, especially if this phenomenon is grouped in a particular geographical area,” the energy provider said.