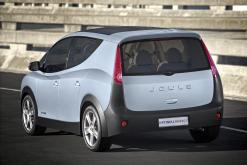 After two years of development and R50-million ($6-million) in research, South Africa’s first battery-operated electric car is ready to show itself to the world. The car, known appropriately as the Joule, will make its debut at the Paris Motor Show in October 2008 after a brief showing to the media earlier in September. Photos of the Joule are embargoed until the unveiling in Paris, but anticipation is high.

Cape Town-based Optimal Energy is the developer and the car itself was designed by South African-born Keith Helfet, internationally renowned as the designer of the XJ-220, XK-180 and F-Type Jaguars. The son of a Ford dealer in Cape Town, Helfet is described as always having been mad about cars. After completing a BSc in mechanical engineering at Cape Town University, he applied for a position in the auto design course at the Royal College of Art in London. Only five places are awarded annually, and Helfet was one of those chosen.

After graduating he joined Jaguar in the UK where he rose through the ranks to become chief stylist. He started his own design consultancy company in 1993.

The Joule is a compact medium-sized six-seater vehicle that is described as “an uncluttered mix of a Renault Scenic and a Citroen Picasso”. A three-seater commercial van will also be produced. The body is a mix of plastic and composite materials on a steel frame, which is described by Optimal as the key to Joule’s spacious and versatile interior. Side impact bars in the doors provide extra safety.

Joule has been fitted with a regenerative braking system, which is a mechanism that slows a car by converting its kinetic energy into other forms of energy. The converted energy is stored in a battery or capacitor for later use – this can save a great deal of energy. The standard fitting comprises four ventilated disk brakes with ABS.

Optimal Energy received a grant of R50-million ($6-million) from the National Research Foundation’s innovation fund to develop the car. The company is headed by former Denel Aviation engineer Kobus Meiring, who until recently was project manager at the Southern African Large Telescope project in Sutherland.

Meiring said that the Joule will drive for 400km on its two large-cell lithium ion battery packs, which will take about seven hours to reach full charge when plugged into a 220V home power source. Joule’s battery bay is highly configurable and can adapt to batteries from different suppliers, giving the customer a choice of cost and performance. All battery cells are independently monitored by an onboard computer. The car is also said to have a solar panel on the roof.

It is expected that Joule will sell for around R200 000 ($25 000), and Optimal hopes to go into full production by the end of 2010. The car has also been designed to meet overseas standards and will be exported once it has been launched locally.

Minister of Science and Technology Mosibudi Mangena described the development and launch of the Joule as a watershed moment in the country’s National System of Innovation (NSI). Overseen by the National Advisory Council on Innovation, the NSI is a network of public and private organisations that interact to nurture and develop innovation in science and technology.

Mangena lauded Optimal for creating the Joule on “practically a shoestring budget”. He added that government believes the car has special attributes that make it valuable to South Africa’s motor industry, which is already highly regarded throughout the world and has landed several very lucrative export contracts in recent months. Mangena singled out the Joule’s electric drive system, and added that the car’s owner will be able to power up the system overnight at home.

The Joule also falls in line with the government’s 10-year plan on innovation, which holds as one of its short-term goals a reduction in consumption of electricity generated by fossil fuels, following a spate of power outages across the country caused by national power provider Eskom’s inability to match supply with demand. Eskom generates most of its power from the burning of coal but, according to a 2006 report by the Council for Scientific and Industrial Research, coal reserves are likely to last only another 50 to 200 years.

For those who fear that large numbers of electric cars will put more pressure on the national grid, an independent analysis of the power provider has shown that there is sufficient capacity to support millions of cars without affecting existing customers or requiring any additional infrastructure. This is because most electric cars will be charging late at night and in the early hours, using the excess energy available to Eskom during those hours.

“Furthermore, Joule is fully aligned with Optimal Energy’s vision to establish and lead the electric vehicle industry in South Africa as a springboard to global expansion.”

Hopes are high that the Joule will establish a new culture of pride and confidence in home-grown products in South Africa, as well as encourage more development and innovation in crucial areas such as environmental issues.

“A team of talented individuals who put their heads together to develop this electric car are the kind of South Africans we need to lead this country into a knowledge-based economy,” said Mangena. He added that he hoped to see more youth inspired by the opportunities represented by the Joule and going on to forge careers in science, engineering and technology.