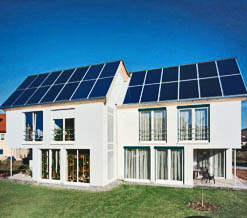 An example of an Ecovillage home. 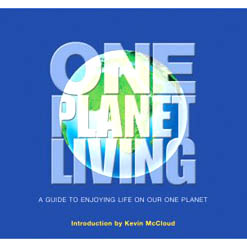 The One Planet Living campaign has
taken off across the world. 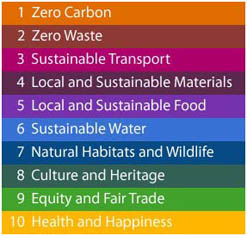 South Africa will soon join several countries across the world in promoting the “ecovillage” idea, which focuses on low-impact and sustainable living.

The idea is the vision of One Planet Living – a joint venture between conservation body World Wide Fund for Nature (WWF) and British environmental organisation BioRegional. The latter says it is passionate about educating the public on “living within our fair share of the earth’s resources”.

The ecovillage concept is based on 10 guiding principles of sustainability, which include eradicating carbon dioxide emissions; energy efficiency; recycling; sustainable transport systems which cut dependency on fossil fuels; making use of locally sourced materials and food to boost local economies; adhering to fair trade relationships; promoting biodiversity and preserving local cultural heritage; as well as endorsing physical, mental and spiritual well-being. For more details on the principles, see OnePlanetLiving

According to BioRegional, the core objectives of the One Planet Living programme are to:

The organisation says the rate at which humans are currently consuming resources and polluting is 30% greater than what the planet can sustain, making it vital to switch to “One Planet Living” practices. It adds that increased consumption reduces space for other species in the environment to flourish, resulting in a loss of biodiversity.

BioRegional has been working in South Africa since 2002 and a number of projects have been undertaken since then.

Workshops on waste-free living have been hosted by the organisation in Johannesburg, Cape Town and Durban. Those in attendance have included academics, architects, consultants, developers and scientists.

One Planet Living programme coordinator in South Africa, Sarah Alsen, says the organisation is waiting for the final planning phase to be completed before building can start at Sibaya. “We are currently waiting for the environmental impact assessment report to be issued – hopefully we’ll get it sometime this year. We aim to start construction in the first quarter of 2009.”

Alsen says the 5000 homes to be built on the site will mostly be apartments, with a few free-standing houses.

Two other sites have also been earmarked for possible ecovillages in South Africa. The 240ha Northern Farm, northwest of Johannesburg, Gauteng, is currently being developed by the Johannesburg Property Company. The firm plans to create a mixed-income suburb there to promote socio-economic integration in the greater City of Johannesburg.

A prospective developer has also expressed interest in creating an ecovillage in the Western Cape. BioRegional made a presentation to the provincial administration in August 2005 and in November that year the developer’s partners presented a similar idea at the Summit for Sustainable Human Communities in Stellenbosch, also in the Western Cape.

Local government officials consequently visited London in September 2006 for a two-day ecovillage study tour hosted by BioRegional. London boasts a number of well-functioning ecovillages, as do other regions in Britain, as well as the US, Portugal and China.

Development has not yet begun in the Western Cape, although the province remains interested.

WWF and BioRegional helped London develop a strategy for the 2012 Olympic Games, which are being hosted in that city.

In July 2006 WWF and BioRegional’s One Planet Olympics concept was launched in conjunction with London 2012’s sustainability policy with a view to hosting the first Olympic and Paralympic Games guided by One Planet Living’s 10 principles of sustainability.

This was received very well by the International Olympic Committee and helped the city clinch the bid.