An artist’s impression of the world during
Earth Hour.
(Image: Inhabitat) 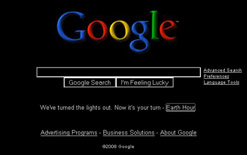 Top search engine Google, also heeded
the call by turning off its lights for an
hour.
(Image: Google)

South Africa reduced its power consumption by 400 MW during the Earth Hour campaign on 28 March, joining the millions of people across the world who switched of their electricity for an hour to protest climate change.

The 400 MW resulted in a 15% reduction in South Africa’s power consumption for lighting, or about half the energy output of one of Koeberg’s nuclear reactors.

Fani Zulu, representative of electricity utility Eskom, says they are still investigating which area, according to statistics, had the biggest drop of lighting demand during that hour, between 8:30pm and 9:30pm.

This year saw the World Wide Fund for Nature’s (WWF) third Earth Hour celebrations, but a first for South Africa.

The organisation has described the success of Earth Hour as the “single biggest community action in history.”

In Melville, a trendy suburb in Johannesburg known for its vibey nightlife, a few restaurants opted for candlelight.

At the Blues Room, a top live music and dinner restaurant, patrons were treated to dinner by candlelight in support of Earth Hour.

Other tourist attractions that heeded the call to switch off lights during Earth Hour included Table Mountain in Cape Town, and further afield, the statue of Christ the Redeemer in Rio de Janeiro, Brazil.

In other parts of the world, the Sydney Opera House, the Burj al Arab Hotel in Dubai, the Millennium Stadium in Cardiff as well as one of the world’s tallest buildings, the Taipei 101 in Taiwan joined in the campaign.

In Paris, the Eiffel Tower, Louvre and Notre Dame Cathedral were among 200 monuments and buildings that participated throughout France.