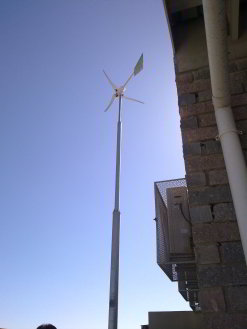 The Kestrel e300i small wind turbine
currently supplies as much as 35% of
the branch’s energy needs.

The poor community of Du Noon in
the Western Cape now has access to
traditional banking.
(Image: Milnerton information website)

The small informal settlement of Du Noon, just off Table Bay in the Western Cape province, was considered windy enough for the construction of a wind turbine next to its local Nedbank branch.

Towering above the building, the Kestrel e300i 1kW small wind turbine produces up to 7.8kWh of power for the branch’s air conditioning, security systems, and all computers.

Du Noon’s Kestrel also produces energy for storage, which is fed to the branch during a power cut. The wind-generated energy is converted to three-phase electricity and then stored in an uninterruptable power supply.

Banking operations will continue even if the supply from power utility Eskom fails, and the only signs will be a dimming of the lights and temporary cessation of the air conditioner.

Furthermore, the branch will contribute to the prevention of 2.7 tons of greenhouse gas emissions annually, and the burning of 2.8 tons of coal every year.

The branch currently derives as much as 35% of its energy requirements from the turbine, and hopes are high that eventually it will be completely reliant on this clean, renewable energy source. A deadline has not yet been set for the switchover.

By giving the poor Du Noon community access to traditional banking, Nedbank hopes to contribute to the growth and development of the area.

Nedbank has already established its green credentials through a long association with the Green Trust and the World Wide Fund for Nature, and by becoming Africa’s first carbon-neutral bank in July 2010.

The bank recently announced that it’s sold more than 98 000 tons of carbon offset credits to the international PPR group, which owns luxury brands such as Gucci, Yves Saint Laurent, and Balenciaga.

The credits were obtained from Nedbank’s involvement in Wildlife Works’ Reduced Emissions from Deforestation and Degradation project in Kenya. The bank has supported this project since 2009 and in this time has accumulated over 1-million tons of carbon credits which it uses for its own emission offset goals, and to sell to other companies.

“This transaction is an excellent reference for us as we continue to grow our presence in the carbon market in South Africa, elsewhere in Africa and in other parts of the world,” said Kevin Whitfield, Nedbank’s head of carbon finance.

The Kestrel e300i is locally developed and has been deployed in suitable areas across South Africa, from the Settlers Park Primary School in Port Elizabeth – known as the Windy City – to the Northern Cape, where one device powers a mobile repeater station.

“The installation of this device is rather poignant, considering that it is situated about 5km from the Koeberg nuclear power plant,” said Nedbank’s managing executive for consumer banking, Ciko Thomas.

He said the pilot project will help the bank to get to grips with wind technology so that other branches can eventually benefit, which will in turn reduce pressure on the often-strained national grid.

“We need to get our own house in order if we want to lead in this sector,” said Thomas, adding that the bank is excited about the potential for wind power to become a significant source of renewable energy, especially in the Western Cape which is notorious for its strong winds.

Through its Caring for Communities project, Nedbank has also committed to sustainably developing communities across South Africa. The consumer education programme is aimed at teaching people to run their own sustainable community projects, and is targeted at adults and high school pupils.

Nedbank’s own employees participate in the programme as volunteers.

In Du Noon, the Sophakama Primary School is a beneficiary of a number of eco-friendly aids, thanks to Caring for Communities.