Law enforcement officials got an extra helping hand when drones were used during police raids in Cape Town. They helped the officers by offering an aerial perspective of the scene. 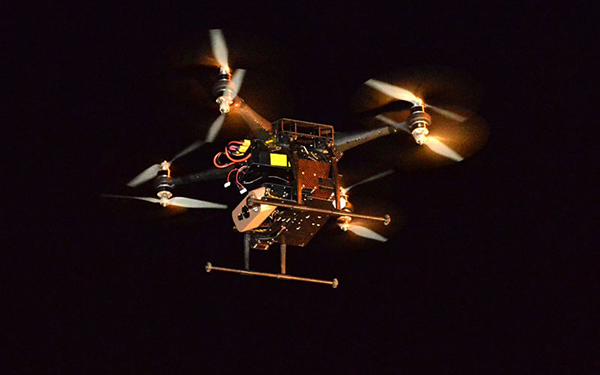 The future is here. Drones were tested in Cape Town during police raids to help in the fight against crime. (Image: Business Tech)

Drones being used to fight crime… it sounds like a scene out of a Hollywood sci-fi movie, or something Batman would do, but in reality it’s happening on the streets of Cape Town.

Remotely piloted aircraft – used as aerial surveillance tools – helped police during raids in the city. They used the Dronetec WASP Mk4, which is equipped with a close ground support package. The drones are made by Dronetec.

“When arriving at the suspect’s house, a drone with an infrared camera was launched nearby and watched from above,” explained the technology news website, My Broadband. “If any suspects fled, hid, or threw weapons or drugs away, the drone captured it all.”

Dronetec said the drone gave support to police in a similar way to a helicopter, but did not involve expenses for things such as fuel and a pilot. Using thermal imaging at night also made suspects more visible to police.

“There has been an increase in the demand for drones in the law enforcement and security industry as the use of a helicopter is often not an option due to unavailability or impracticality,” explained Dronetec.

JP Smith, Cape Town’s mayoral committee member for safety and security, said the test was effective. “We saw drug dealers fleeing down passages and into homes. We saw where one tossed his package of heroin and we saw a gangster crawl across a roof and drop into a neighbouring property,” he said. “We were able to arrest him, much to his surprise, when he emerged a few houses down.”

Smith said the drones were not only useful in police raids. They could help in fighting fires and disaster response co-ordination. It was a big advantage for any operational commander to have a larger view of what was happening on any targeted property, and would allow him to instruct his team accordingly.

“Drones are a cost-effective way to do remote controlled camera surveillance and photography rather than owning or hiring helicopters,” Smith said. “They have their limitations in terms of weather, so there will always be environments in which you need an aircraft, but drones can do a lot of good.”

The drone has four arms and eight motors. It can operate at altitudes of 50 to 150 metres, and depending on the weather, it has a 2km range. It is possible for it to stay in the air for up to half-an-hour.

“Top speeds of over 100km/h have been recorded,” noted Dronetec. “But in normal flight the speed is roughly between 40 to 60km/h depending on flight conditions.”

Watch the drone in action:

Futuristic sci-fi gadgets are now a reality, and are being put to good use.